Thales semicircle theorem says that an angle inscribed in a semicircle is a right angle.

Q1. Does a cone with apex on a hemisphere and encompassing the circular base have a solid angle independent of the position of the apex?

Q2. I am seeking a proof or reference for the generalization to $d$ dimensions.

I have not found a reference, which makes me wonder if the answer to Q1 might be No...

And here are two enlarged views of the $\phi=5^\circ$ intersection: 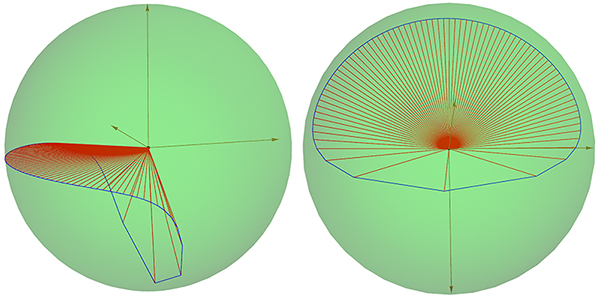 I think the limit of the red cone as the green point approaches the base is a quadrant, in agreement with The Masked Avenger's earlier impressions but not his later ones.

Imagine viewing the circle $(\cos \theta, \sin \theta, 0)$ from the point $(\cos \phi, 0, \sin \phi)$. What does the projection of the circle onto our field of view look like? To find out let's subtract the two points, getting:

If we project onto the sphere by dividing by the length, this will be:

So the circle, viewed on the unit sphere, converges to these two circular arcs. The view of the disc must contain the quadrant $x<0, z<0$ bounded by the two arcs. It is easy to see that no other points will be in the limit. So the limit area is the area of a quadrant, or $\pi$ steradians. Since this is not the measured area at the top of the sphere, I think this shows that the answer to Q1 is "no".

Let the point on the hemisphere be $P$. Let the equatorial disk be $D$.

Consider the right circular cones whose apex is $P$ whose axes are perpendicular to the plane of $D$. The solid angle of a cone with apex angle $2\phi$ is $2\pi (1-\cos \phi)$. The derivative of this is $2 \pi \sin \phi$. Consider the intersection of the surface of the right circular cone of apex angle $2\phi$ with the cone over $D$. This is a cone over an arc of angle $f(\phi)$ radians. The solid angle of the cone over $D$ is thus

Another way to state that is to compute the solid angle in spherical coordinates centered at $P$, which I why I used $\phi$ to denote half of the apex angle.

So, the solid angle is 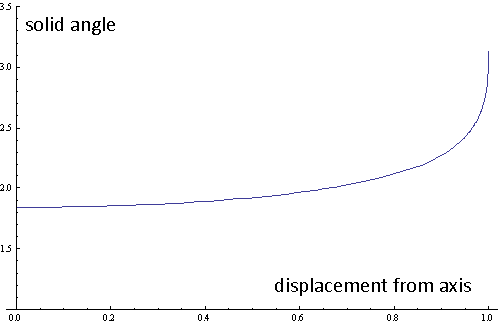 So, numerical calculations indicate that this is not constant.

In the 2-dimensional case, we are looking at an angle inscribed in a circle. In 3 dimensions, what we are looking at is an oblique circular cone inscribed in a sphere. The thing is, an oblique circular cone is just a right elliptical cone cut at a slant. For our purposes, the 3-dimensional analogue of an angle is an (infinite) elliptical cone.

(You've probably seen how you can obtain an ellipse by intersecting a right circular cone with a plane - that is why they're called conic sections, after all. Cutting an elliptical cone also results in conic sections. And if you do it in just the right way, you may get a circle.) 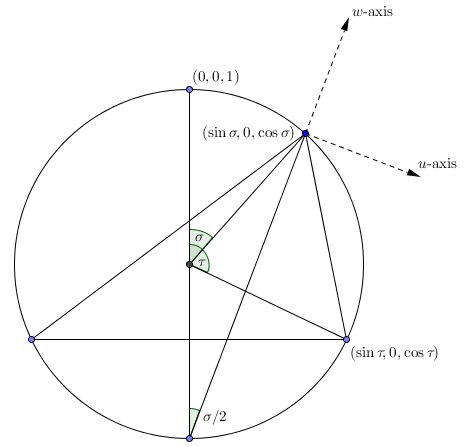 So our conclusions are:

The fact that the "semi-minor parameter" is the invariant is actually not that surprising. Let $A=(0,0,-1),B=(\sin\sigma,0,\cos\sigma),C=(\sin\tau,0,\cos\tau)$. Then angle $ABC$ is $\tau/2$ (see the figure); this is essentially just the 2-dimensional inscribed angle theorem. It's sensible that $\cot(\tau/2)$ is one of the parameters of the elliptical cone.

ad Q1. It is a simple, if tedious, elementary exercise to compute the solid angle subtended at a point in space by a figure in the $x$, $y$ plane as a function of its coordinates. One places the point in a small ball and computes the surface area of the stereoraphic projection of the figure on the corresponding sphere. This provides a scalar function whose level surfaces give an answer to Q1 in quite a general situation. Of course, the computation of this function involves double integrals over the given figure and it will depend on the latter whether this can be done explicitly.

Added as an edit. The corresponding two dimensional problem was very popular in classical differential geometry. An isoptic curve (other names---equioptic, isogonal) to a figure (not necessarily one dimensional) is the set of points from which the figure subtends the same angle (not necessarily a right angle). An interesting question is when these curves are equipotentials, i.e., the level curves of a harmonic function. This is not the same as asking whether the function described above is harmonic. This question is motivated by the fact that this is indeed the case for some of those few cases where the isoptics have been computed (e.g., the isoptics of an ellipse).

Having seen the analyses presented in the other answers and Douglas Zare's comment about difficulties in visualization, I offer a view on the problem that shows how to arrive at a qualitative result (the answer to Q1 is no), and explains my confusion (expressed in a comment to Will Sawin) on why I thought a limiting value was pi steradians, then backpedaled and said it was NOT pi steradians.  (The computations of Will and Douglas and further consideration support the guess I had initially: the solid angle eventually grows to pi steradians when the observer moves close to the disk.)

I initially thought of the pictures that Joseph presented as unintentionally misleading: the question asks about a projection onto a hemisphere, but not onto the hemisphere on which the observer is located, which is the prominent figure in Joseph's pictures.  One has to suppress Joseph's initial illustration and replace it by one where the observer is the center of a different hemisphere; the original base is now an object to be projected on this hemisphere representing the visual field of the observer.  I call this new hemisphere the "visible hemisphere".

I thought first on possible projections of the observed disk onto the visible hemisphere. It seemed that the projections would get larger primarily because one got closer to the disk edge.  In fact, the disk would "block" about half the field of vision, so that would suggest a solid angle of close to pi steradians.  However, when one is at the edge, one sees the disk edge on, and projects no such shadow.  I also thought that the shape would resemble (but not match) that of an elongated disk approximated by an ellipse, which approached a wedge shape that covered half of the visible hemisphere.

I then tried a different model, which I called a "flap model".  I chose half a disk, with its diameter oriented up and down, fixed that diameter to the apex of the visible hemisphere, and observed that the (appearance of the) diameter stayed constant (thanks to Thales), and so I always had part of the observed disk stay at the same apparent position as the observer traveled.  Taking the observer's position, I moved part of the disk like a flap hinged at this diameter, and imagined that this portion grew larger as it swung closer to the observer (almost hitting the observer on their nose), but because it was a circular flap, some significant portion of the half of the hemisphere might still be visible, and also, the other half of the observed disk formed another flap that swung away from the observer and got smaller.  In particular, this set up the image in my mind that I had trouble resolving with my initial thought: if the image is a projected ellipse, why is the diameter of the disk not a diameter of the projection?  Since I couldn't immediately resolve this, I commented to Will Sawin about my "certainty" that the projection did not approach pi steradians in measure.

The confusion arises from common notions of perspective.  (I hope Joseph takes his cue and provides some illustrations.) When one takes a rectangular region at some distance from an observer, say the face of a digital clock, and rotates it around an axis of symmetry parallel to the shorter edge of the rectangle, one gets a trapezoidal shape as a projection.  (When projected to the visible hemisphere, it is a different shape, but the curves are not noticed by the observer.)  If one does not have a reference line though, one assumes the axis of symmetry is placed equidistant from the bases of the apparent trapezoid.  When the rectangle is far away, the actual axis is not far from the imagined axis, and so the assumption seems to hold, at least for government purposes.  But in fact, the actual axis is NOT equidstant from the line equidistant from the parallel bases of the trapezoid, and in order to see this, one has to perform some calculations or some very good observations.

The disparity for circles is even less apparent: we approximate the image of a rotated disk by an ellipse.  The projection however is not an ellipse, and in certain extreme cases the approximation is poor.  It was such an approximation that misled me to thinking that one could not get close to pi steradians in this situation.

I finally did mentally what I should have done in real-life:  I imagined holding an analog clock close to my face, and turning it until it almost hit my virtual nose.  I imagined the number 12 right above the number 6, and in an elliptical projection or in a scenario where the clock is (not very) far away, the 11 and 7 are closer to me but still appear closer to each other than the 12 does to the 6.  However, when the clock is about to hit my face, the 11 and 7 appear farther away than the 12 and the 6.

That the 11 and 7 will appear farther away makes sense when one places one's eye very close to the 9, and draws the lines of sight from the eye to the 12 and 6, and finds these lines run between the 11 and 7.  However, and this is the key to this posting, one does not think of this image from the initial setup of Joseph's problem.

Once one has the insight that the analog clock image does distort severely even from such simple, common, and everday projective transformations, then resolution occurs: the clock does not elongate in a somewhat elliptical fashion to occupy a quadrant, instead it distorts in a way which fills the quadrant in a nonintuitive fashion not easily described.  The equations in the other postings are a testament to the complexity of the descriptions of the resulting images.

While I hope that the post is clear about describing a resolution to the question, I think it more important to describe that a natural assumption about how an object appears should be subject to question, and that tests, not just analysis, of the extreme limits of such assumptions need to be made.  To borrow from another MO post, multiple perspectives are very useful for resolving this problem.

Not the answer you're looking for? Browse other questions tagged reference-request mg.metric-geometry or ask your own question.

7
Thales Style Level Sets
2
Is there any counterpart to Thales' semicircle theorem in higher dimensions?