It is well-known that there is a relationship between music and mathematics, and there are many references that explore this topic (for example, Benson's book).

One narrow example is the Hexachordal Theorem, which in one version says that a chord composed of any six notes on a twelve-tone scale has the same "interval content" as the chord composed of the complementary six notes. Some believed this underpinned Schoenberg's use of hexachords. The short abstract below provides a number of references to proofs of the theorem, starting from Milton Babbitt in the 1950s, through to proofs by crystallographers interested in distinct point patterns that lead to the same X-ray diffraction patterns. This could be considered an example where the mathematics that developed out of a musical notion was perhaps more interesting than its musical origin. 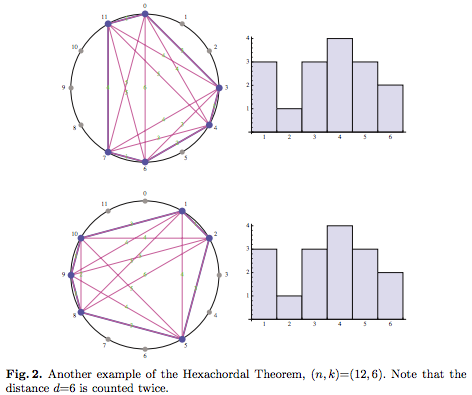 if you allow computer science to be a branch of mathematics, the computational modeling of music similarity could fit your description; this workshop described the challenge of the field as follows:

The dramatic increase in the digitization of music calls for the development of computational methods in Music Information Research, such as content-based querying and retrieval, automatic music classification, music recommendation, and digital rights management. A fundamental topic involved in these different aspects of processing music information is the computational modeling of music similarity. Similarity in music is a highly context dependent notion and poses serious challenges for computational modeling, so much so that state-of-the-art retrieval methods have recently hit a glass ceiling.

For an overview of the literature, this Ph.D. thesis might be a good starting point.

I suggest you look into the work of my colleague Jack Douthette.

16
Where to publish a paper on the Mafia game?
42
Undergraduate math research
3
Open problems and known identities involving sums
33
Do's and don'ts of writing survey papers
8
Generalization of Sylvester-Gallai theorem
3
More recently published comprehensive reference on inequalities in the spirit of Hardy-Littlewood-Pólya
8
A survey for various $K$-homology theories and their relationship
7
Survey papers on the role played by PDE in mathematics
Question feed