Action of the homotopy braid groups on reduced free groups

It is known that $B_n$ acts on $F_n$. More precisely, there exists a group homomorphism $\alpha:B_n\to\mathrm{Aut}(F_n)$ defined by

It is routine to check that this action descends to an action of $B_n$ on $K_n$; that is, $\alpha$ induces a map $\overline{\alpha}:B_n\to \mathrm{Aut}(K_n)$ defined by the same relations above.

The short answer is yes. I will try to explain the intuition behind appearance of the reduced free groups and the link homotopy and why they are related; for the rest, I refer to the great papers of Milnor, Goldsmith, Habegger&Lin and Bar-Natan.

Pure braids which are allowed to go ''back in time'' were given a name by Habegger and Lin: an $n$-component string link $\sigma$ is a proper embedding of $n$ intervals (strings) into the cylindar $\mathbb{D}^2\times I$ so that $i$-th string starts and ends at the prescribed point $p_i\in\mathbb{D}^2$.

That goes roughly as follows. Drag the meridinal loop $x_i$ upwards along $i$-th strand and the first time it passes an undercrossing in the braid diagram (assuming we chose the basepoint ''above the projection plane''), transform the meridian $x_i$ according to a Wirtinger-type move: $$ x_i\mapsto \alpha y_i\alpha^{-1}:=y_i^\alpha $$ where $\alpha$ is the meridian corresponding to the overcrossing arc and $y_i$ is the new meridian of the $i$-th strand after the crossing. Now drag $\alpha$ and $y_i$ upwards in the same manner; moreover, repeat with all other meridians to arcs that show up on the way, until you get a word only in the meridians to the upmost arcs. This word is $\xi_\sigma(x_i)$.

However, the group $\pi_1(\mathbb{D}^2\times I \setminus\sigma)$ for a more general string link is not isomorphic to the free group. Whenever a ''reversal in time'' happens, we are forced to drag our meridian down, so some undercrossing on our way might force us to conjugate by something we already had before. For example, for the string link in Jjm's post (read it from right to left) we get $x_4\mapsto y_4^\alpha$ and $y_4\mapsto z_4^{x_4}$, so we can't terminate the procedure!

One way to get around this is to notice that problems arise when we are trying to conjugate by an element which is already a conjugate of the meridian for the same strand. Hence, if we now imagine that we are always allowed to change a crossing of a strand with itself, this problem will dissapear: we are introducing relations that any two conjugates of $x_i$ commute with each other.

Definition. [Milnor] For any group G normally generated by some elements $a_1,\dots,a_k$ define $\mathbb{R}G$ as the quotient of $G$ by relations that impose that each $a_i$ commutes with any of its conjugates. For example, we have the reduced free group $\mathbb{RF}_n:=\mathbb{F}_n\big/\langle [x_i,x_i^\alpha]=1, \forall \alpha \rangle$.

From this perspecitve it is natural to introduce the relation of link homotopy on string links: the homotopy of the strings relative to their boundary, such that distinct strings remain disjoint at all times. One can show that the set of equivalence classes, called homotopy string links, forms a group $\mathcal{H}_n$ with respect to the concatenation. Moreover, we now have the isomorphism of reduced groups $\mathbb{R}\pi_1(\mathbb{D}^2\times I \setminus\sigma)\cong \mathbb{RF}_n$ and every homotopy string link induces an automorphism of $\mathbb{RF}_n$ analogous to $\xi_\sigma$ above. Habegger and Lin give a characterization of these autuomorphisms analogous to the Artin's presentation.

Here is a geometrical intuition which perhaps is useful to find the positive result, although it is not a complete answer.

First of all: the free group $F_n$ may be regarded as the fundamental group of the $n$-punctured plane:

The braid group acts on the free group simply by moving the points according to the 'temporal' dimension of the braids and deforming the loop accordingly.

Now: is there any possibility to do something similar allowing braids to 'come back' (so that the homotopy braid group is geometrically visualized)?

Well, in this case we should allow (supposing enough regularity) pairs of points appearing and dissapearing, corresponding to the braid maxima or minima. May we deform the loop in a consistent way? 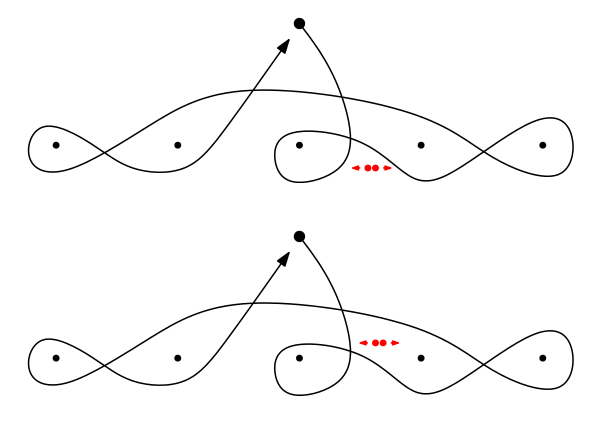 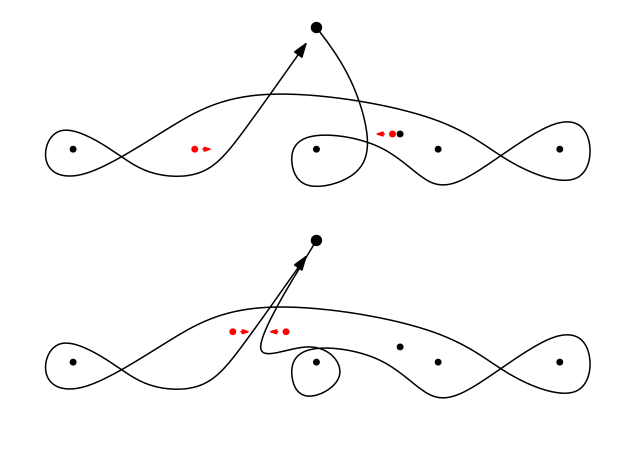 So the 'generalised braid group' (and $\tilde{B}_n$) do not act on the free group. But I think that when looking at $K_n$, all this problems dissapear, thanks to the the additional relation.

As I said before, this is not really an answer, but I hope it reveals the geometric core of the answer. Perhaps with this idea it is easier to get deeper insight in the problem.