How hard is it to determine if a weighted graph can be isometrically embedded in R^3?

Question: In $\mathbb{R}^3$, how hard is it to assign coordinates to vertices such that the Euclidean length of each edge is equal to its weight?

Question: Does it get any easier if $G$ is the 1-skeleton of a simplicial surface?

(A similar question was already answered here, but an answer was given only for the special case of complete graphs.)

There are several possible ways to interpret your question. Let me mention three, all very different:

(1) For general graphs, say you want to decide if there is such realization at all, and if yes find it approximately. This is called Graph Realization Problem and it is well studied both theoretically and practically (e.g. it is easily NP-hard). For general references see So's thesis, and for connection to graph colorings our paper below.

A. So, A Semidenite Programming Approach to the Graph Realization Problem, Ph.D. thesis, Stanford, 2007.

(2) For triangulated surfaces, say you want to approximately compute the convex realization (the decision problem is easy by the Alexandrov theorem). This is done by a recent analysis of the Bobenko-Izmestiev algorithm mentioned in the Igor Rivin's answer:

(3) For triangulated surfaces, say you want to compute the exact vertex coordinates. First, note that even in $\Bbb R^2$ the equilateral triangle cannot be realized using rational coordinates. What happens is that you are solving a large system of quadratic equations. The vertex coordinates are then solutions of equations of large degree with coefficients being polynomials in squared edge-lengths. In our paper with Fedorchuk we use a Bezout's theorem type argument to show that the upper bound on these degrees is $2^m$, where $m=3n-6$ is the number of edges of the triangulated surfaces with $n$ vertices. Note that for even the most trivial triangulated surfaces such as the cyclic polytope (think of a "snake of tetrahedra") there is a natural exponential lower bound $2^{n-4}$, see the paper.

Just a remark: for convex surfaces (given by their intrinsic metrics) there is no good algorithm. The best heuristically is:

But still seems to be exponential.

This is not an answer, but I wanted to include an image in this comment.

I assume by "simplicial surface" you mean a triangulated surface, i.e., a surface all of whose faces are triangles. My hunch is that it is not easier for triangulated surfaces without further restrictions. For example, you might insist the surface be (a) closed, (b) embedded, and (c) have genus zero. Even with these restrictions, I suspect it is not fundamentally easier, because of the phenomenon illustrated below, which introduces exponential possibilities: 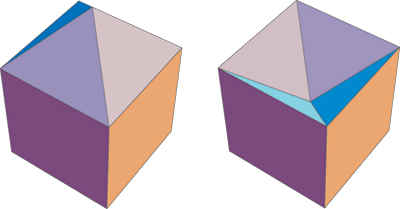 Not the answer you're looking for? Browse other questions tagged graph-theory mg.metric-geometry discrete-geometry computational-geometry metric-embeddings or ask your own question.

9
Algorithm for embedding a graph with metric constraints
1
brownian motion on a weighted undirected graph
2
Need input on a potentially NP-hard maximal edge-weighted multi-cycle graph
3
How to partition a graph into N groups with M elements nearest?
6
Integral straight-line embeddings of planar graphs
6
Geometric dominating set: NP-complete?
16
Can the graph of a symmetric polytope have more symmetries than the polytope itself?
Question feed