Q1. What does $PFA$ say about other values of continuum function? Does proper forcing axiom carry any further information about values of continuum function in other cardinals greater than $\aleph_{0}$? In the other words, is there any other known non-trivial result in the form "$ZFC+PFA\vdash 2^{\aleph_{\alpha}}=\aleph_{\beta}$" for some ordinals $\alpha , \beta$, or all other situations are consistent with $PFA$ like Easton's theorem in presence of some large cardinal?

Maybe Godel's conjecture and program are true if we replace the standard tree of large cardinals with another tree with equiconsistent steps. Please note the following imaginary large cardinal ladder which includes two parallel trees of "large cardinal" assumptions:

Q2. Can we complete the middle part of the following ladder by some axioms like $A$, $B$, $C$, ..., $X$ which are equiconsistent with usual large cardinal axioms and also refute $CH$, $GCH$ and $V=L$ in direction of Godel's program? 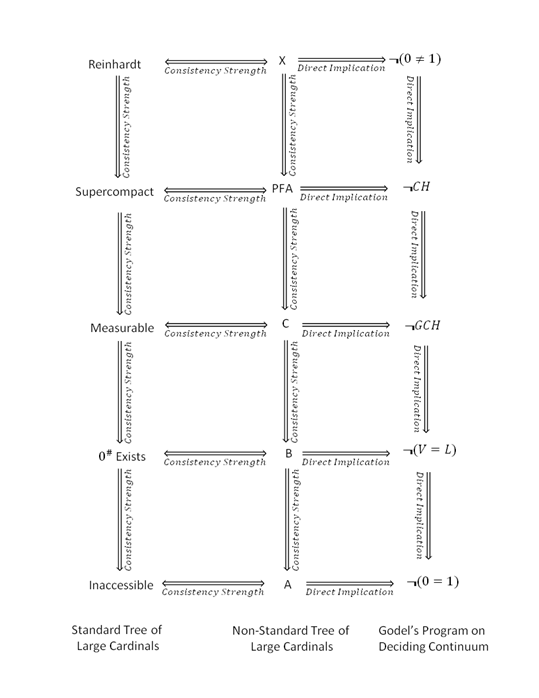 Update. Using above approach to large cardinal axioms (inspired by success of $PFA$ in deciding $CH$ and its possible equiconsistency with existence of supercompact cardinals) we can restate Godel's program in deciding independent statements of set theory as follows:

In the other words one can decide any independent statement of mathematics using some standard/non-standard large cardinal axiom.

Q3. Is the above thesis true?

I would like to thank Asaf Karagila for his comment in my previous question that was the main guide for this question.

First note that PFA implies SCH. On the other hand, PFA is indestructible under $\aleph_2-$directed closed forcings, so we can force any pattern of Easton theorem for regular cardinals $\geq \aleph_2.$ By SCH the power function on singular cardinals is completely determined by its behavior on regular cardinals

If we start with an indestructibly supercompact cardinal $\kappa$, then we can do Easton forcing to get any reasonable continuum function on the regular cardinals $\geq \kappa$ and retain the supercompactness of $\kappa$. Then we can force PFA via the original Baumgartner way with a $\kappa$-c.c. forcing of size $\kappa$. Using these facts, it is then easy to show that no cardinals above $\kappa$ are collapsed, and the same cardinal arithmetic will hold after forcing PFA.

Question 2 admits a trivial answer, because any assertion implies $0\neq 1$, provably so in ZFC, and so for $A$ you can just use "there is an inaccessible cardinal". Similarly, the existence of $0^\sharp$ already implies $V\neq L$, and so you can use $B=$ "$0^\sharp$ exists". And for C, you can use "there is a measurable cardinal and $\neg$CH"; this is equiconsistent with a measurable cardinal, and it implies $\neg$CH. For $X$, you can just use the Reinhardt cardinal again, since any statement implies $0\neq 1$ in ZFC.

Similarly, question 3 also has such a kind of unsatisfactory simple answer. Suppose that $\sigma$ is any statement at all, and $I$ is any large cardinal axiom. Since any particular model of ZFC+I will either satisfy $\sigma$ or satisfy $\neg\sigma$, we can deduce from Con(ZFC+I) that one of Con(ZFC$+I+\sigma$) or Con(ZFC$+I+\neg\sigma$) holds. Let $J$ be either $I+\sigma$ or $I+\neg\sigma$ accordingly, so we get property (a) as a material implication, and property (b) holds because $J$ settles $\sigma$ explicitly.