There are very short intervals having two zeros.

Is it true (maybe conditionally)?

Counterexamples? (Please check for 2 zeros in a short interval).

This is a nice problem. On the Riemann Hypothesis this is true, for both the real and imaginary parts. Here's the proof for $v(t)=\text{Im}(\zeta(1/2+i t))$.

The figure below shows the graph of $Z^\prime(t)/Z(t)$ (in blue) and the graph of $-\cot(\theta(t))\theta^\prime(t)$ (in red) in a typical situation where the Gram points and the (imaginary part of the) Riemann zeros alternate. These are the so called 'good Gram points'. The blue and red vertical lines show the poles at the Riemann zeros and Gram points. Between a Riemann zero and a subsequent Gram point, $Z^\prime(t)/Z(t)$ decreases from $+\infty$ to a finite value, while $-\cot(\theta(t))\theta^\prime(t)$ increases from a finite value to $+\infty$. By the Intermediate Value Theorem, there is precisely one intersection. Between a Gram point and a subsequent Riemann zero, the situation is reversed. 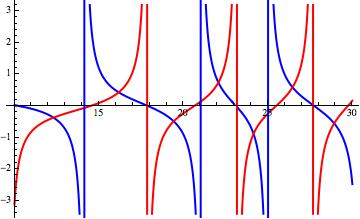 'But wait', you say, 'not all Gram points are good. What about the bad Gram points?' The second and third figures together (note different vertical and horizontal scales) show what happens at the first bad Gram point ($k=126$). Between two consecutive Gram points without an intervening Riemann zero, $Z^\prime(t)/Z(t)$ decreases from one finite value to another, while $-\cot(\theta(t))\theta^\prime(t)$ increases from $-\infty$ to $+\infty$. Again by the Intermediate Value Theorem, there is precisely one intersection. Between two consecutive Riemann zeros without an intervening Gram point, the situation is reversed. 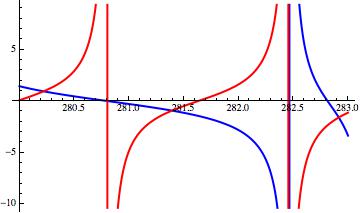 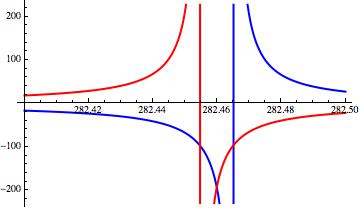 Thus in all scenarios, between two consecutive zeros of $v(t)$ there is precisely one zero of $v^\prime(t)$. The zeros are simple as long as no Riemann zero is a Gram point.