Based on limited numerical evidence, I suspect this conjecture.

Verification for several random $\sigma$ and $ 0 < t < 30000$ and for a few random intervals didn't show any counterexamples.

For $\sigma > \frac12$ it is false and on the other hand this appears counterintuitive to me.

Counterexamples? (please check for closely spaced zeros that might look like a single local minimum on a large plot).

Does this contradict something?

Even if it is true, a conditional proof probably will be hard yet welcome.

For Siegel $Z$ function on the critical line RH implies this for $t$ large enough.

Plot of a random interval: 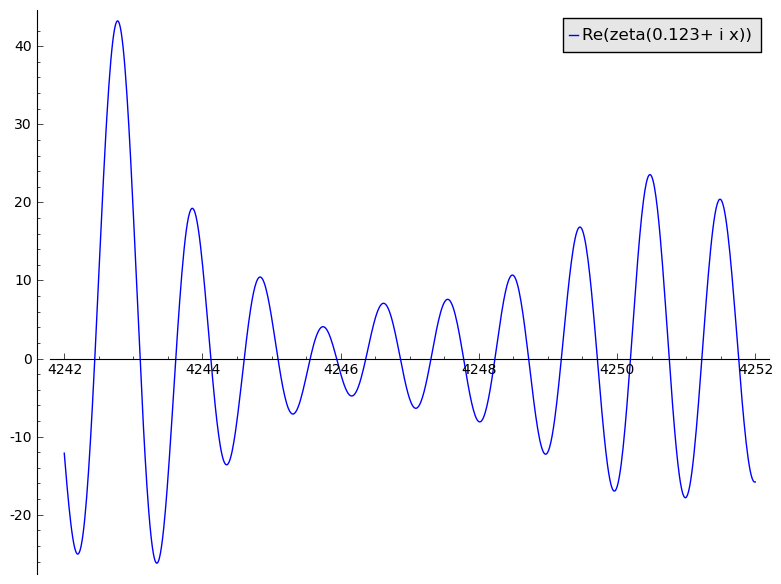 nt.number-theory riemann-zeta-function counterexamples
Share
Improve this question
edited May 23 '19 at 20:28

This question has been on my mind from time to time since it was posted seven years ago. Joro says "Maybe can be generalized to $\sigma\le 0$. In fact, outside the critical strip is actually easier, and that's what this post addresses.

So, in a right half plane $u$ is never $0$, while the level curves for $v=0$ and $u_t=0$ are very close and approximately horizontal lines. The level curves for $v_t=0$ are also approximately horizontal line lying halfway between those of $v=0$. So in a right half plane, along a vertical line $u$ is never $0$ but alternately increasing and decreasing, while $v$ has an extreme point between consecutive zeros.

Now since $u=0$ is in particular constant approximately along a line, $-v_t=u_\sigma=0$ along a curve which is approximately this same line. And similarly with $v=0$ and $u_t=0$.

One can make this a little more precise by computing the logarithmic derivative of the functional equation, which gives

Thus in a left half plane sufficiently far to the left of $\sigma=0$, along a vertical line $u$ has an extreme point between pair of consecutive zeros, and the same for $v$. 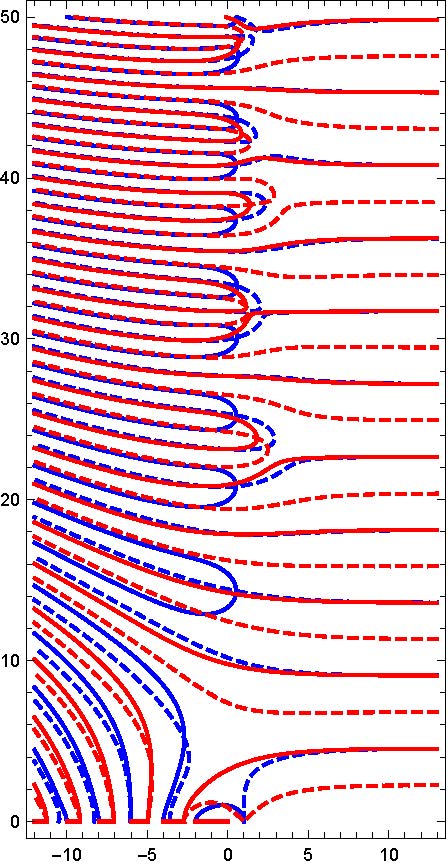 Update: One can imagine why Joro's conjecture might follow from the Riemann Hypothesis (which was assumed to prove the conjecture on the critical line in the linked question). If the conjecture were to fail, say for $u$, in the region $\sigma<1/2$, one would need a level curve $u=0$ (solid blue) and a level curve $u_t=0$ (dashed blue) to swap places. In particular, they need to cross. To the extent that the level curves $u=0$ and $v_t=0$ (dashed red) are close, there will be an intersection of $u_t=0$ and $v_t=0$ nearby. Such are the zeros of $\zeta^\prime$. On the Riemann Hypothesis these points must lie to the right of the critical line.

Not the answer you're looking for? Browse other questions tagged nt.number-theory riemann-zeta-function counterexamples or ask your own question.