This is a combinatorics-probability question, best stated however in "recreational" terms. Imagine a $N\times N$ city, meaning that we have $N$ horizontal streets, and $N$ vertical streets. At each crossroads there is a street light.

When evening comes, some of the lights are switched on, namely those corresponding to a certain given subset $E\subset(1,\ldots,N)\times(1,\ldots,N)$.

Now assume that $2N$ kids come at night and start randomly playing with the switches: there is one such on/off switch at the end of each of the $2N$ streets.

Problem: for each of the $4^N$ overall choices for the various switches, we count the number $K$ of street lights that are switched on. What is the law of this random variable $K$, as a probability measure on $(1,2,\ldots,N^2)$, depending on the initial set $E$?

[Edit, Jan 20. As signaled by Joseph O'Rourke in his answer below, computing the upper edge of the support of the measure $\mu_E$ in my problem is known as the Gale-Berlekamp game, a difficult question (details can be found via Google search). So I realise that my problem is probably extremely difficult, adding the "open-problem" tag. I'd be interested however in the case where $E$ is an Hadamard matrix, cf. discussion with Gerhard Paseman in the comments below. Is there anything known about this measure $\mu_E$? (I mean, not only about its support.)

This paper by Fishburn and Sloane seems quite related:

Abstract. Berlekamp’s game consists of a $10 \times 10$ array of light-bulbs, with $100$ switches at the back, one for each bulb, and $20$ switches at the front that can complement any row or column of bulbs. For any initial set $S$ of bulbs turned on using the back switches, let $f(S)$ be the minimal number of lights that can be achieved by throwing any combination of row and column switches. The problem is to ﬁnd the maximum of $f(S)$ over all choices of $S$. We show that the answer is $34$. We also determine the solution for $n \times n$ arrays with $1 \le n \le 9$. 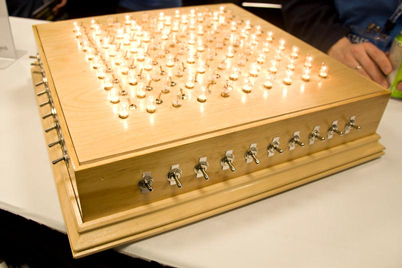 (Image from this link.)

Not the answer you're looking for? Browse other questions tagged co.combinatorics pr.probability recreational-mathematics open-problems or ask your own question.