Covering maps in real life that can be demonstrated to students

Edit: I've really enjoyed everyone's examples (especially the pictures!), but I was mostly looking for a general theorem. For instance, a similar statement to mine is, Can the mapping cylinder of every finite-sheeted covering map of a finite graph be embedded in $\mathbb{R}^3$? This is the level of generality I'd be most interested in. On second thought, and after reading the comments, I think a community wiki list of interesting examples (like those below) would be more helpful to other instructors. If you have any more, please post them!

After some thought, it seems that some graph coverings (like a double cover of the figure eight) can be realized in real life, while it seems that nontrivial surface coverings cannot be exhibited unless the circle has boundary. My question is,

What is the class of covering maps of graphs or two-dimensional CW-complexes that can be realized in 3-space, i.e. so that there is a homotopy of the covering space in $\mathbb{R}^3$ onto the base space which is an isotopy for $0\leq t< 1$ and is the covering map for $t=1$?

(This is my working definition of "real life homotopy", since we allow things to touch but not pass through each other. There may be a better definition.)

My favourite example of a real-life covering space is a multi-level parking garage, along with all up-down ramps. Wander around for a while, and you're on a different deck.

For classroom purposes, you can tell your students they probably already studied covering maps in kindergarten when folding paper, cutting out a figure and then unfolding the paper to see a paper dolls chain: 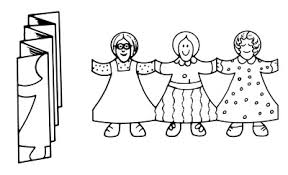 The fact that the fundamental group SO(3) is Z/2 is sometimes shown by a funny movement of the arm, twisting it once while keeping the hand palm up, and detwisting it by twisting it once more. See also this thread on Stackexchange.

Here's an example I learned from John Franks. This is a nice example because it's used to produce an example of Smale's sphere eversion problem. It also generalizes to include (for example) Will Sawin's comment above.

Consider the Boy's surface. This is an immersion of $\mathbb{R}P^2$ into $\mathbb{R}^3$. If you look at its normal bundle, there's no sense of +1 or -1 (because it's non-orientable) but you can look at its associated unit sphere bundle. This is the orientation double cover--a.k.a. the sphere--immersed into $\mathbb{R}^3$. By scaling the fibers of the normal bundle from 1 to 0, you see the "covering homotopy" of $S^2$ onto the Boy's surface, as you ask for.

So that's the thing you're looking for, but let's go further--instead of just scaling from 1 to 0, scale from 1 to -1. This is a homotopy, through immersions, of $S^2$ to itself, and it leads to one way in which you can evert the sphere (i.e., turn it inside out). I think this strategy originally came from Shapiro, though any historical corrections are welcome!

More generally, if you immerse any 2-dimensional object (i.e., an un/orientable surface with or without boundary) you can perform the same trick, examining the unit-length elements of its normal bundle. In Will Sawin's example, take an embedded Mobius band and examine its unit normal bundle--this gives the non-standard embedding of the cylinder you're asking for, and scaling the normal bundle to the zero section gives you the "covering homotopy" you seek.

As far as I can tell, you can cover any graph embedded in $\mathbb{R}^3$ with its universal cover using a homotopy that satisfies your conditions. This is because trees are contractible, and can snake themselves into tight spaces without intersecting themselves.

I like the Cayley graph of the symmetric group $S_3$ for the presentation $P$ with generators $x,y$ and relations $r=x^3,s=y^2,t=xyxy$. This gives a $2$-complex $K(P)$ with one $0$-cell, two $1$-cells, labelled $x,y$, and three $2$-cells labelled $r,s,t$. The Cayley graph of $P$, i.e. the $1$-skeleton of the universal cover of $K(P)$, is shown above (part of Fig 10.6 of Topology and Groupoids), where the solid lines are mapped to $x$, and the broken lines to $y$. Also shown is a choice of maximal tree. You can also see the lifts of the $2$-cells, but they can't all really be drawn since the corresponding universal cover is a $6$-fold cover, and there are not enough $2$-cells in the above diagram. The dots show where a relation starts.

Another nice exercise for students is to ask them to construct two $3$-fold covers of $S^1 \vee S^1$ such that one is regular and the other is not. For the convenience of readers here is picture of the two graphs, but with unlabelled arrows! It nicely shows how one graph has 3-fold symmetry and the other does not.

Not only a covering, but every piecewise linear map $f$ between finite graphs can be realized in $\Bbb R^3$ in your sense. To see this, pick a triangulation $T$ of the mapping cylinder of $f$ that projects simplicially to some triangulation of $I=[0,1]$. Then pick a generic level-preserving map $g$ of the mapping cylinder in $\Bbb R^3\times I$ that is linear on each simplex of $T$. (Generic here means that the images of any $k+1$ vertices span a $k$-dimensional affine subspace in $\Bbb R^4$ as long as either $k\le 3$, or $k\le 4$ and not all of the $k+1$ vertices have the same $I$-coordinate.)

Then $g$ has only finitely many double points, all in $\Bbb R^3\times (0,1)$. (Say, if a pair of 2-simplices with at most one vertex in common have a 1-dimensional intersection, then their 5 or 6 vertices aren't affinely independent.) If $s$ is the minimal $I$-coordinate of a double point, then the part of $g$ that lands in $\Bbb R^3\times [0,s/2]$ yields the desired homotopy.

I'm quite amazed that this rather standard argument didn't occur to anyone having seen this question in 3 months. Maybe a tag like "geometric topology" could have helped. There is some literature on realizing maps in your sense, which goes under "isotopic realization".

Not the answer you're looking for? Browse other questions tagged at.algebraic-topology big-list covering-spaces or ask your own question.

12
Can we map every graph in the plane such that all induced cycles selfintersect?
26
Teaching the fundamental group via everyday examples
6
Universal covering and double cover functors
10
Spaces that are finitely covered by manifolds
3
Coverings of a space and coverings of a groupoid
Question feed