I've seen some papers by Brazas, Biss, Cannon and Conner, but I couldn't see how to especially use their results in finding such an example. I'd expect such an example to be in the literature somewhere. Could somebody give me a reference in this case?

One idea is to find a non semilocally simply connected space $X$ with finite fundamental group, e.g. $\mathbb{Z}_2$. In this case, it might be possible that $X$ itself acts as a universal covering space.

My answer to this question gives an example of a locally path connected (but non-semilocally simply connected) space $HA\subset\mathbb{R}^3$ called the Harmonic archipelago: draw the Hawaiian earring on a disk and between each hoop push the surface straight up to make a hill of height 1. 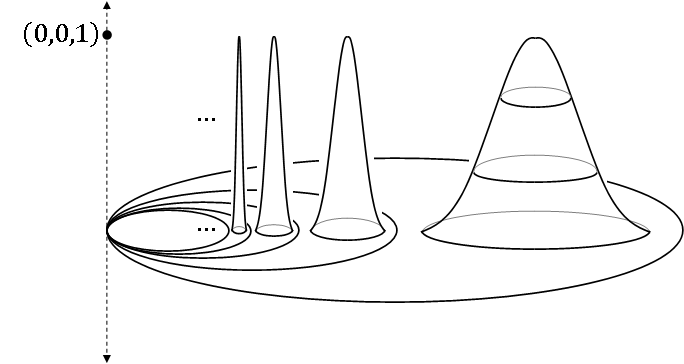 The fundamental group is uncountable but the only covering of $HA$ is itself so it is the unique object in its category of coverings. This weird covering behavior happens because you can deform any loop as close as you want to the basepoint (over finitely many hills) but cannot actually contract it all the way to the basepoint because the homotopy would have to take the loop over infinitely many of hills (contradicting compactness).

Constructing locally path connected examples with countable indiscrete fundamental groups is much harder. In fact, I think it is an open question whether or not there exists a Peano continuum with finite, indiscrete fundamental group. For such spaces it is more efficient to talking about coverings via the "shape topology" and Spanier groups (the last section of this paper shows the shape topology consists precisely of the data of the category of coverings). Applied to your question: locally path connected $X$ has a categorical universal covering iff there is a minimal open subgroup in $\pi_1(X)$ with the shape topology. If the minimal open subgroup is the trivial subgroup you get back a classical universal covering and a discrete group.

let $X$=Hawaiian earring, consider $CX$ be the cone with base X. Now take two copies of this space named as $CZ$ and $CY$ and $z$ be the point where all circles of $Z$ are tangent similarly for $y$. Now consider $K= CZ \wedge CY$ (wedge sum of two spaces identifying the point $z$ with $y$). Now $K$ is connected and observe that both $CZ$ and $CY$ are contractable, but $\pi_1(K)$ is not trivial. For example, a closed path oscillating back to forth from $Y$ to $Z$ around the decreasing circles is not null homotopic. A good reference for this is J.W.Cannon and G.R. Conner's paper- "The combinational structure of the hawaiian earing group."

You probably mean to assume that $X$ is connected, and to allow only covering spaces $E\to X$ such that $E$ is connected.

In the good case, that category of connected covering spaces is equivalent to the category of sets with transitive action of $G=\pi_1(X,x)$. Note that the universal covering space is not initial; it corresponds to a set with a free transitive $G$-action; it has a map to every object, but not a unique one.

Certainly there are non-slsc examples in which the category of connected covering spaces has a "universal"object. For example, the "topologist's sine curve", which is connected but not path-connected, has no covering spaces except the one-sheeted one.

Tom Goodwillie wrote "In general such a map $E\to E'$ is not itself a covering space, although this is true in the good case, i.e. when $X$ is connected and locally path-connected and semi-locally simply connected"

I guess, even $X$ is a "deloopable" space (i.e. semilocally simply connected etc.) such maps $E \to E'$ are not in general covering space. For example a lifting of the universal cover is a morphism of the category being said about (because the identity $X \to X$ is a covering space). It can however never be a covering space. I guess even, "covering" (being a reflexive transitive relation) can never be symmetric, i.e. two non-homeomorphic spaces $X$, $Y$ can never cover each other. Two (non-isomorphic) fields can never be Galois extension of each other

Not the answer you're looking for? Browse other questions tagged at.algebraic-topology gn.general-topology covering-spaces or ask your own question.

10
Is a space with no covering spaces simply connected?