Dynamical systems with multidimensional, complex and other exotic kinds of time spaces

But has anyone studied a generalization in which we allow the time space to be something more general & exotic, a multidimensional space like $\mathbb{R}^n$, $\mathbb{C}$ (viewed as "2-dimensional" by considering it to be like $\mathbb{R}^2$), etc.? I'm especially curious about the case where the time space is $\mathbb{C}$ and the phase space is $\mathbb{C}^n$ or another complex manifold and the map is required to be holomorphic in both its arguments, as that holomorphism provides a natural linkage between the two dimensions that lets us think of the complex time as a single 2-dimensional time as opposed to two real times (any dynamical system with a timespace of $\mathbb{R}^n$ can be decomposed into a bunch of mutually-commutative evolution maps with timespaces of $\mathbb{R}$). My questions are:

In “real time”, the dynamics looks like an “explosion” in the plane: all points “blast” away from z = 0 at exponentially increasing velocity.

In “imaginary time”, the result is cyclic motion, swirling around $z = 0$ with constant angular velocity that depends only on the distance of the point from $z = 0$.

But if we trace the contours of these two evolutions, formed from different points on the plane, and then superimpose them, we have contours intersecting in what looks like contours from a contour graph of the image of the complex plane under the function $\exp(z)$! Conversely, we could say it looks like a countour plot of $\log(z)$ with a cut along a ray from $0$. So, somehow “naturally” related to the dynamical system $\phi^t(z) = \exp(t) z$ is the function $\exp(z)$ (or, perhaps, $\log(z)$).

Note that my plotting facilities are unfortunately pretty limited, so I can't give really nice graphs with lots of contours, just a few selected ones taken from evolutions of various points in both real and imag times.

Now we consider the contour lines of the real and imaginary evolution, as before. They look like this: 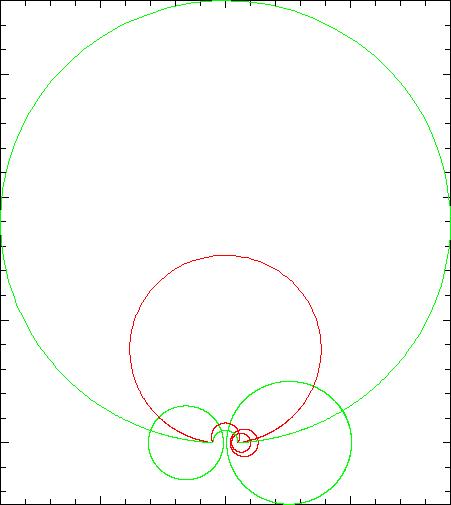 Again, notice how the lines meet at right angles. It looks again like the image of the plane (or the Riemann sphere, perhaps?) under some function which may be holomorphic, though I'm not sure what that function is in this case. Is this the case? Is there such a function, with a special relation to this CTHDS in the same way as $\exp$ (or $\log$) is to the other?

But in any case, it appears that for a complex-time holomorphic dynamical system, or CTHDS, there exists an associated natural function. What is the significance of this function/map? How does it relate to the CTHDS? If you give me a CTHDS that I don't have a closed form for, can I find its natural map?

In ergodic theory (as opposed to dynamical systems), systems in which the acting group is not the integers or the reals have been widely studied, both for their own intrinsic interest and because of deep and striking applications to number theory and other areas. For example, the proof by Einsiedler, Katok, Lindenstrauss that the set of exceptions to Littlewood's conjecture has zero Hausdorff dimension uses an ergodic-theoretic result on higher rank group actions.

As soon as the acting group has higher rank (even in the simplest case, i.e. $\mathbb{Z}^2$), the study of their ergodic theoretic properties becomes dramatically more complicated, even if the phase space is as simple as possible (the circle). A famous example is Furstenberg's $\times 2\times 3$ problem: what are the measures which are simultaneously invariant under $x\to 2x \bmod 1$ and $x\to 3x\bmod 1$? (this corresponds to the action of $\mathbb{N}^2$ on $[0,1]$ given by $(a,b)\cdot x=2^a 3^b x\bmod 1$). It is suspected that there are very few invariant measures, which illustrates a general (conjectured or proved) phenomenon: higher rank dynamical systems tend to have few invariant measures, all of them with some algebraic structure. Indeed, Einsiedler, Katok and Lindenstrauss use such a rigidity result.

The book by Einsiedler and Ward "Ergodic thory (with a view towards number theory)" is an excellent reference for this general topic.

In the case when the phase space is $C^n$, we have a lot of possibilities. There is a hudge (infinite-dimensional) continuous group of analytic bijective transformations of $C^n$ onto itself. You can take any complex 1-parametric subgroup of this group. For $n=2$, there is a very nice paper of Milnor on this group.

I have seen talks about this, though somewhat over my head. But, yes absolutely, people do research such things. A. Katok is one name that comes to mind here. See this paper: http://citeseerx.ist.psu.edu/viewdoc/summary?doi=10.1.1.33.2082

B. Kalinin and V. Sadovskaya also work in this area, seeing their talks was how I was exposed to this field: http://www.southalabama.edu/mathstat/personal_pages/sadovska/Research/tns.pdf

A lot of the work I've been exposed to is about classifying such systems up to a conjugacy, and in particular they consider Anosov systems and see if they can find conjugacies in the general case to canonical examples.

This is not my expertise, though, so I can't say what this says about the $\mathbb{C}$ case you're interested in. But at least I can say, yes, indeed there is work in the higher-dimensional case.

This question is from long ago, but I will give it a try. I want to note that multi-dimensional times do occur "naturally", in some reasonable manner. As an example, take coupled map lattices, with two times involved: the actual time and the space translation, along which different systems may interact. In this setting (which is thus a $\mathbb Z^2$ action) it is easier to produce many invariant measures, say for short-ranged actions. In fact one can even develop a thermodynamic formalism, equilibrium and Gibbs measures, etc.

In the context of higher rank actions with some hyperbolicity there has also been some progress, notably with work of Kalinin and Katok where the existence of an invariant geometric structure is obtained for the first time from homotopy data.