The straightest possible path embeddable in a path of polygons

I'm studying a problem involving the sets of discrete curves that can be embedded in a non-trivial polygon, from a source to a target point, as shown below.

Initially my interest was limited to the set containing discrete curves with the possible smallest segment count and within this set the discrete curve with the shortest length. I've been able to find this discrete curve (not shown in the above graphic).

Now I'm considering the problem of the straightest-possible discrete curve that can be embedded in the polygon, and I suspect, or rather I'm hoping, that both curves, the one with the smallest segment count and the straightest one are identical. I'd appreciate help showing that is or isn't the case.

Clarification of the question (courtesy of arex)

Suppose a simple polygon is given, along with two points, s and t, within the polygon. Is there a polygonal path from s to t that simultaneously minimizes the number of segments and amount of turning. Simple means homeomorphic to a disk; a polygonal path is a piecewise-linear curve; and turning is measured by the sum of the absolute values of the turning angles.

I'm making the following restatement of the initial problem, now solved, because it describes the sort of path that I'm investigating. Also the description may trigger insight into the question of bounds on straightness:

The polygon can be considered as a tunnel in which there is no line of sight between two points, which we can imagine to be the source and destination of a light beam. We seek to install the smallest number of light beam relays required to forward a signal as quickly as possible though the tunnel from source to the destination. The locations of the relays are the equivalent to the intermediate vertices of the shortest discrete curve with the minimum possible segment count embeddable in a non-trivial/non-convex polygon.

As a complement to Bill Thurston comment, what situation do you prefer?

In the second case you have more segments but the length is shorter, and obviously the sum of the angles are equal in both cases.

Note: I assume that the ends points are fixed, that is you have no choice on their position on the side of the polygon. Is it OK?

P.S. I couldn't put the figure in the comment, so I put it in an answer even if it is not, it was to long to explain with words.

I am not sure that the process of simplification can help in anything. But I'll try to clarify what I have in mind. Imagine that the bold black curve is the path of minimal length (I didn't draw the ambient polygon). You go from $a$ to $b$ etc. The point $b$ is the first point of "inflection", means that the turning changes sign. If you don't touch the first and last segments on $(a,b)$ you will not change the total turning angle on this piece of path. You have then (on the picture) the choice of three simplifications (thin lines marked with circles at rupture points), two of them gain 1 segment count, and the other one gains 2. If some of them fit in the ambient polygon, it's fine, and you continue that way, on the next part, until the next inflection point. You would like to simplify also by shortcutting along the green dashed line, but you cant since the bold curve is assumed to be the shortest, it must be an obstacle there. So, this way starting with a short curve you may improve the straightness. As I am really not an expert on this kind of geometry, I am not sure this way leads somewhere. It seems that there is still a long way from here to a proof of the existence of what you are looking for.

The natural generalization of your "straightest-possible" constraint is a curvature-constrained path. I know this is not what you asked, but I wanted to mention that even finding a path with maximum curvature 1 inside a convex polygon is already difficult. This was studied by Agarwal et al. in a paper, "Curvature-Constrained Shortest Paths in a Convex Polygon," (SIAM Journal on Computing, Volume 31, Issue 6, 2002) Here is one of their figures, which hints at why it is difficult to find a path between initial $I$ and final $F$ positions/orientations: 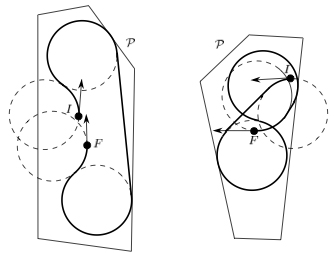 Returning to the question (or questions) you did ask, I think looking at the paper "Polygonal path simplification with angle constraints," by Chen et al. (Computational Geometry, Volume 32, Issue 3, November 2005, Pages 173-187), might help. They explicitly consider the "tunnel" version of your revised question, phrased in terms of an error tolerance $\epsilon$. Perhaps most usefully for your purposes, they describe all the related work in this domain, which has considered many variations. Usually those variations start with a path $P$, and then try to find another path (a "simplification") with certain properties: (1) The min-# problem: Find a path that remains within $\epsilon$ of $P$ but has the fewest segments; (2) The min-$\epsilon$ problem: Given a fixed number $m$ of segments, find a path using no more than $m$ segments that minimizes $\epsilon$. This specific paper solves the min-# problem with the addition of angular constraints, which seems close to your initial formulation (as clarified in the comments).

Not the answer you're looking for? Browse other questions tagged co.combinatorics discrete-geometry computational-geometry or ask your own question.