What is the representation of the generators of the triangle group for the uniform (4 4 4) tiling of hyperbolic disk as Mobius transformations?

I wonder how can one describe the generators of the triangle group for the tesselation of Poincare unit disk by triangles with angles $\pi/4, \pi/4 , \pi/4 $ in terms of the action of the modular group on a fundamental triangle. In other words, I mean how can one write the generators of this tesselation in terms of Mobius transformations. I'm completely unfamiliar with the theory of hyperbolic tesselations, and there may be many inaccuracies in my understanding and even with the specific terminology i use.

My purpose is to verify an historical hypothesis i have on Gauss's tesselation of the unit disk as described in John Stilwell "Mathematics and its history". Looking at the relevant pages in Gauss's Nachlass (volume 8, p.102-105), I read that the commentor (Robert Fricke) on this fragment of Gauss says that Gauss's drawing (the (4 4 4) tesselation) is intended to be a geometrical illustration for composition of substitutions other then the fundamental generators of the modular group. The following sentences are a citation of Fricke about the substitutions Gauss used:

Gauss has repeatedly dealt with composition of other substitutions of the group defined from these generators. In addition to the information in fragment [i], the following formula should also be mentioned $$\frac{[\alpha, \beta,\dots,v]\theta + [\beta,\gamma,\dots,v]i}{-i[\alpha,\beta,\dots,\mu]\theta+[\beta,\gamma,\dots,\mu]}$$ which can be found in a booklet entitled “Cereri Palladi Junoni sacrum, Febr. 1805”. The continued fraction expansions of the two substitutions are given as examples:$$\frac{128\theta + 37i}{-45i\theta + 13}$$ $$ \frac{121\theta+36i}{-84i\theta+25}$$

Just to explain the words of Fricke, "the group defined from these generators" is the modular group (since the generators mentioned before this sentence are addition of $i$ and inversion with respect to the unit circle), and the $[,,\dots,]$ is Gauss's notation for a continued fraction. I think $\theta$ is just a notation for the complex variable that is transformed under the Mobius transformation.

Although it seems at first that these Mobius transformations are just examples of a general principle of certain continued fractions developement, immediately after that Fricke says:

Both to explain the continued fraction development of the substitutions and to draw conclusions from the theory of functions, Gauss made use of the geometrical representation which has become the basis of the more recent theory of module functions. In the booklet just mentioned, Gauss drew the figure shown here. Since the above-mentioned continued fraction expansions of substitutions are also to be found, Gauss must have used the figure as a means to illustrate these continued fraction expansions. In fact, one has here the beginning of the well-known network of circular arc triangles, which is the basis of the theory of modulus functions. It's evident that Gauss generally understood the "principle of the symmetrical multiplication of curved triangles", which comes into consideration here, and even the character of the "natural limit" of a triangular network to be obtained in this way did not remain hidden... These are circular arc triangles of the angles $\frac{\pi}{4},\frac{\pi}{4},\frac{\pi}{4}$, and the orthogonal circle highlighted in the drawing represents their natural limit. In addition to the drawing, the following information was written by Gauss: "Center of the first circle: $2^{\frac{1}{4}}$, radius of the first circle: $\sqrt{\sqrt{2}-1}$, center of the second circle: $\frac{1}{2}(\sqrt{\sqrt{2}+1}+\sqrt{\sqrt{2}-1})$, radius of the second circle:$\frac{1}{2}(\sqrt{\sqrt{2}+1}-\sqrt{\sqrt{2}-1})$.

Therefore, it seems that these Mobius substitutions are actually the generators for the (4 4 4) tiling of the hyperbolic disk. But this conclusion is a result of a very shallow reading of Fricke's comments and i lack the proffesional knowledge needed to verify my reading. In addition, there are two drawings in these pages (one on p.103 and the Gauss's tesselation on p.104), and i'm not sure to which drawing Fricke refers.

Being the first drawing of it's kind, the tessellation drawed by Gauss and his related results have planted some the seeds of Felix Klein's "Erlangen program" (with the other influences being Galois's theory of equations and Riemann's geometric ideas). Klein read Gauss's fragments very closely and seems to have been influenced by them, so i think it's not an exaggeration to say that Gauss's drawing was one of his sources of inspiration. Therefore i believe that for a correct historic appreciation of the roots of Erlangen program, it's important to know wethever the substitutions written by Gauss are related to his drawing or not.

Concerning the results stated by Gauss on the location and radiuses of the centres of the first and secondary circles in his tessellation, my posted answer already confirms them (although it might not be the original method of Gauss). The main issue that remains to be resolved is therefore the meaning of the Mobius transformations.

This is a very partial answer that is intended to verify only some of the many statements in Gauss's fragment - the four statements about the network of curved triangles. In order to facilitate the whole deduction of Gauss's formulas as presented in this answer, i added the original drawing of Gauss (to help visualize the geometric relations). 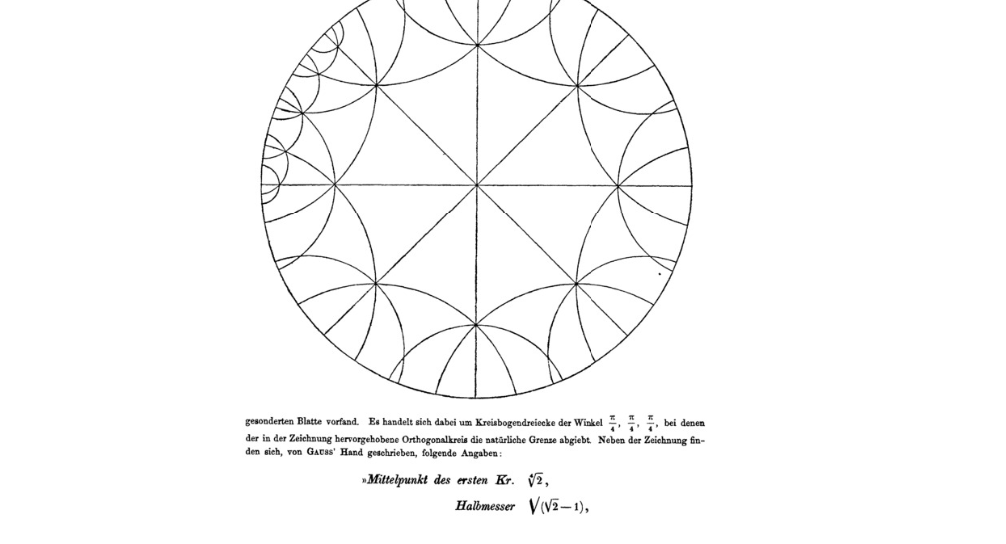 Radius and distance of the center of the first circles:

Theorem: Each of the eight curved triangles with one vertex at the origin $(0,0)$ of the Poincare unit disk has two straight sides which are portions of diameters of this disk and one curved side which is a portion of a circle orthogonal to the unit circle. The center of curvature of this orthogonal circle is at distance $2^{\frac{1}{4}}$ from the origin and it's radius of curature is $\sqrt{\sqrt{2}-1}$ (as in Gauss's fragment).

The length $a$ of a side of an equilateral hyperbolic triangle with angles $\alpha=\pi/4,\beta=\pi/4,\gamma=\pi/4$ in the "real" hyperbolic plane (not the euclidean distance in the Poincare disk model of it) is according to the laws of hyperbolic trigonometry:

The relation between the "euclidean" distance $r$ between each of the other two vertexes to the origin and the corresponding real hyperbolic distance $a$ is, according to the formulas of Cayley-Klein metrics:

Therefore the coordinates of the two other vertexes, after aligning the x-axis with one of the straight sides of the curved triangle, are:

Now the equation of any circle orthogonal to the unit circle is of the form:

Substituting the x,y coordinates of the two points, one gets two linear equation with variables $a,b$, whose results are:

Since the canonic form of the equation of the orthogonal circle is:

, one gets the desired theorem by an easy calculation. Q.E.D

Radius and distance of the center of the secondary circles:

In this notation, $x$ is the distance of the center of the first circles from the origin, and $d$ is derived using the euclidean cosine theorem. One needs to calculate $r'$ in the limit where $r$ tends to infinity since the straight sides of the first triangle can be thought of as circles with infinite radius.

one can easily verify that the result for $r'$ is equal to the formula given by Gauss (simply by squaring both sides). The result for the distances $x'$ of the centers of the secondary circles from the origin is then easily obtained if we keep in mind that, for any $n$th generation circles: $x^2_n-r^2_n = 1$.

Besides one step of the calculation (the use of Cayley-Klein metric), the whole procedure of generation of this curved triangles network can be viewed through euclidean eyes; one needs the concept of inversion of circle in a smaller circle to get a recursive definition of the network. However, Gauss deliberately gives sizes of the first triangles that correspond to tessellation of the unit disk (and not, for example, to a disk of radius 2), and i can't see any way to calculate the required size of the first triangles (required in order to make the unit circle the natural border of this network) without using the conception of the Poincare disk model of the hyperbolic plane.

Therefore, this (very partial!) reconstruction of Gauss's results uses the much later terminology of models of hyperbolic plane, and makes far-reaching assumptions on Gauss's insights into non-euclidean geometry. I suspect there might be other ways by which Gauss stated this result, perhaps by his analytic insights into the j-invariant.

Not the answer you're looking for? Browse other questions tagged ho.history-overview modular-forms hyperbolic-geometry tiling or ask your own question.

11
Nice proof of the triangle inequality for the metric of the hyperbolic plane
4
What is the advantage of inverting elliptic integrals?
14
The complete list of continued fractions like the Rogers-Ramanujan?
86
History of $\frac d{dt}\tan^{-1}(t)=\frac 1{1+t^2}$
27
Can we use the Rogers-Ramanujan cfrac to parameterize the Fermat quintic $x^5+y^5=1$?
Question feed