I'm trying to figure out several things about Gauss's thoughts concerning a certain four-strand braid. The reference my questions are based on is mainly Moritz Epple's excellent article "orbits of asteroids, a braid, and the first link invariant". Among the findings of this article is a new historical thesis of the role which the linking integral served in Gauss's ideas on topology, and an interpretation of it as a computational tool.

In addition, the following two excerpts from letters of two famous topologists (Betti and Mobius), refer to Gauss's interest in braids and offer interesting pieces of information:

The first citation is from an 1863 letter from Enrico Betti to Tardi:

What gave Riemann the idea of cuts was that Gauss defined them to him, talking about other matters, in a private conversation. In his writings one finds that analysis situs, that is, the consideration of quantities independently from their measure, is important; in the last years of his life he has been much concerned with a problem in analysis situs, namely: given a winding thread and knowing, at every one of its self-intersections, which part is above and which below, to find whether it can be unwind without making knots; this problem he didn't succeed in solving except in special cases...

I guess the "thread problem" which is mentioned in Betti's letter is a topological problem (on braids) in the modern sense. The second citation is taken from a letter from Mobius to Gauss on February 2, 1847:

As i heard from Wilhelm Weber, you found it nessecary, a few years ago, as an introduction or preperation for the theory of electrical or magnetic currents, to write a treatise on all possible wraps (configurations) of a thread. Is it not to be hoped that this essay will appear soon? The fulfillment of this hope will be very much appreciated by me and certainly also by many others.

The relation to Epple's interpretations

Epple's interpretation of Gauss linking integral, as a computation rather then a definition, seems to be the missing block in the reconstruction of Gauss's thoughts on topological issues, as the many indirect reports (by Betti, Mobius, Listing, etc) document. I always had a strong intuitive feeling that Gauss's introduction of the linking number cannot be just a definition, since one doesn't need an integral in order to define the linking number (one can do it simply by projecting the link into a plane and then counting negative and positive crossings).

Therefore, i believe the interpretations offered in this article must be explained more clearly, and the many misunderstandings i have regarding Epple's article prompted me to ask this question (Epple made a more accessible and thorough exposition of Gauss's fragments on topology in his book "Die Entstehung der knotentheorie", but this book is written in german so i'm unable to read it).

One thing that i noticed, which seems very interesting to me, is that several results or drawings which some authors refer to, don't appear in any of the 12 volumes of the published version of Gauss's werke. Just as one example, in several articles on the early history of knot theory, the authors mention a collection of 13 knots made by Gauss. So my question is: is there any website which gives access to those obscure writings of Gauss? 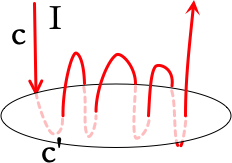 Consider a wire $c$ carrying a current $I$, winding around a closed loop $c'$, as in the figure. The wire crosses the surface $S$ enclosed by $c'$ perpendicularly The integral along $c$ of the magnetic field $\mathbf{B}$ produced by the current is equal to $\mu_0 I$ times the linking number of the curves $c$ and $c'$. This follows directly from Ampére's law:

A quote by Maxwell on this result: "It was the discovery by Gauss of this very integral, expressing the work done on a magnetic pole while describing a closed curve in presence of a closed electric current, and indicating the geometrical connection between the two closed curves, that led him to lament the small progress made in the Geometry of Position since the time of Leibnitz, Euler and Vandermonde. We have now, however, some progress to report chiefly due to Riemann, Helmholtz and Listing." [see arXiv:0703086.]

• The general question:
Gauss's drawings of knots are in his 1794 notebook, which I have not found online. A copy of one page is in History of Science and Knots, see screenshot. 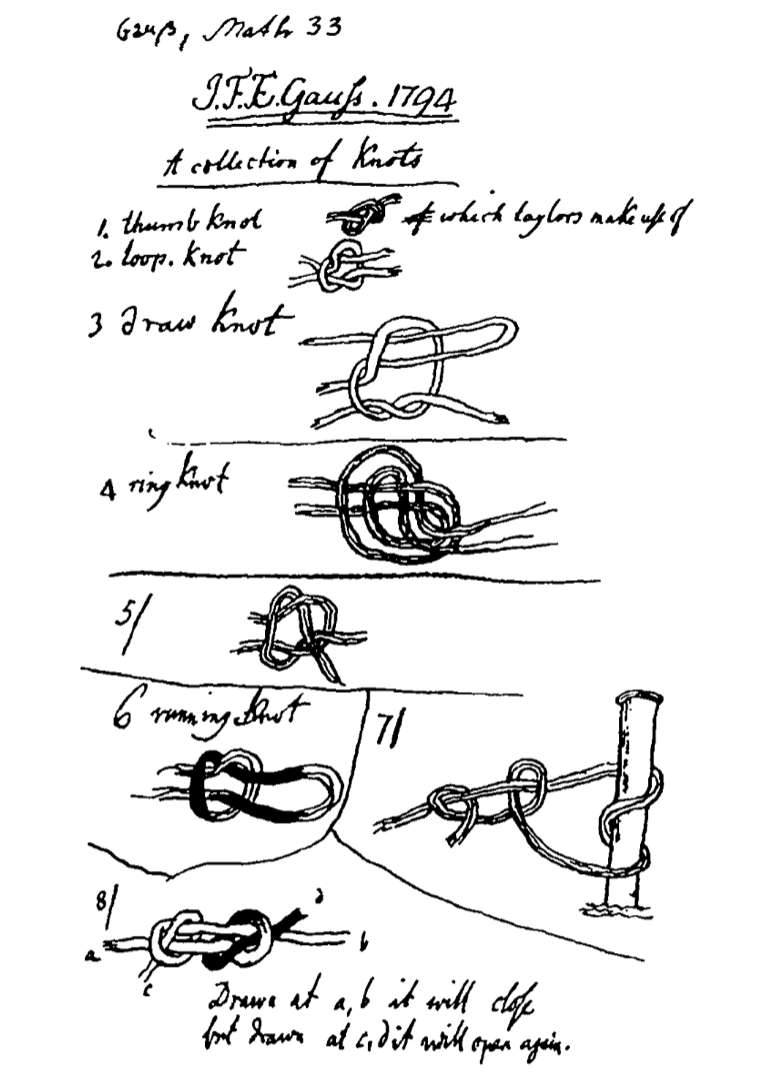 Did Gauss write in English?

The book from which I copied this page with knots suggests that, indeed, the 17-year old Gauss wrote it himself in English:

In 1794 Gauss prepared sketches of thirteen knots, with English names, perhaps copied from an English book of seafarers' knots; this note, together with other papers bearing sketches of knots, was found amongst his papers after his death in 1855.

Below is a signature from Gauss in 1841, almost half a century after these notes, but the handwriting looks quite similar (compare the G and ß in his last name).

This is a bit unfounded attempt to reconstruct the topological problem mentioned in Betti's letter (the fourth question in "more difficult questions"), as i don't have access to those unpublished drawings of Gauss. Anyway, my main point is that perhaps the term "thread" should be interpreted as a "closed braid"- a braid whose corresponding ends are connected in pairs to from a link. This "closed version" of a braid is a link whose number of components is the number of strings in the original braid.

In this way, the topological problem which apparently occupied Gauss can be restated in the following way - which closed braids are topologically equivalent to a trivial link? some additional details on such matters can be found at the wikipedia article about Brunnian link.

I'm far from being expert on those matters, and the connection made in my posted question between Gauss's interest in braids and Betti's letter has not been made by known authors before, as far as i know. Anyway, it's almost certain that "thread" should mean a "multi-component link", so even if Gauss had not thought of this problem in connection with braids, his attempt to solve it is an early example of mathematical thoughts dedicated to links with more than two components.

The modern solution (using Milnor invariants) of this problem is a generalization of the Gauss linking integral for links with only two components, and it enables one to show ,for example, that the "Borromean rings" are linked.

15
Is the pure braid group on three strands generated as a normal subgroup of the braid group by the six-crossing braid?
19
Is anything known about this braid group quotient?
16
Does this subgroup of "even braids" have a name?
0
Braids, pure braids and Dehn twists
2
Plat representations of unlinks
13
How to interpret Gauss's late fragments on conformal mapping of the interior of an ellipse (to the unit disk) in modern mathematical terms?
5
How to characterize the metrical relations in the uniform (4 4 4) tiling of the hyperbolic unit disk from a purely analytic point of view?
16
Question about the theory behind an important footnote to entry 109 in Gauss's diary
Question feed