Yoneda Embedding and pull back

These are called as Yoneda embedddings (I do not have precise reference where it is called so, except for manifolds corollary $4.16$).

Given a smooth map $f:M\rightarrow N$, if it is a submersion, then, $M\times_NM$ is a manifold. We have $2$-fibre product $\underline{M}\times_{\underline{N}}\underline{N}$ and the stack $\underline{M\times_NM}$.

Dmitri Pavlov said here that this has something to do with Preservation of limits by the Yoneda embedding and suggested this and this. But I am not familiar with $(\infty,1)$ categories. So, I am asking here (I am asking as a separate question).

How does one see that Yoneda embedding preserves limits in this setup? Please see my answer, I see the case in classical category theory.

Just an outline is also ok, just that it would be good if it is not mixed with $(\infty,1)$ categories.

But the Yoneda embedding is precisely $y : A\mapsto \hom_C(-,A)$, $f\mapsto f\circ -$ (for it to make sense as a functor we have to make sense of $\mathbf{Set}^C$, which can be problematic if $C$ isn't small, but let's not think about that), so what we said above can be restated : $y$ sends limit cones to limit cones, or again with less precision on the maps $y(\lim F) \simeq \lim y\circ F$, which is exactly the definition of preserving limits.

Define $p:A\to \hom_C(X,L)$ this way, and then the above equation tells us $(\pi_i\circ -)\circ p = p_i$, which tells us exactly that our initial cone factors through the intended one. It's not hard to check that this factorization is unique; so it is indeed a limit cone.

As stated, this has nothing to do with homotopy limits and $(\infty, 1)$-categories, though.

Let $F:\mathcal{I}\rightarrow \mathcal{C}$ is a functor. This is also called as diagram indexed by $\mathcal{I}$.

For each $a\in A$, we have $p_i(a):X\rightarrow F(i)$ such that $F(m)\circ p_i(a)=p_j(a)$ giving following diagram which gives an arrow $X\rightarrow L$ by universal property 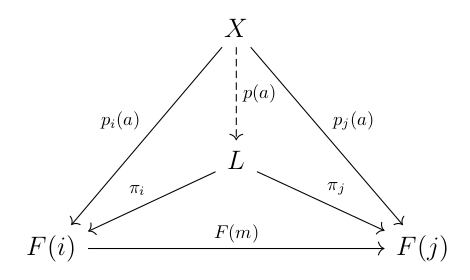 This is the $p(a):X\rightarrow L$ that we associate for each $a\in L$.

Not the answer you're looking for? Browse other questions tagged ct.category-theory stacks limits-and-colimits lie-groupoids or ask your own question.

1
Fibered product of stacks comes from a Lie groupoid