Dan Freed discussed in his notes beneath (20.32) the intuition behind the definition of Madsen-Tillmann spectra as "virtual" Thom spectrum, which I reproduce below 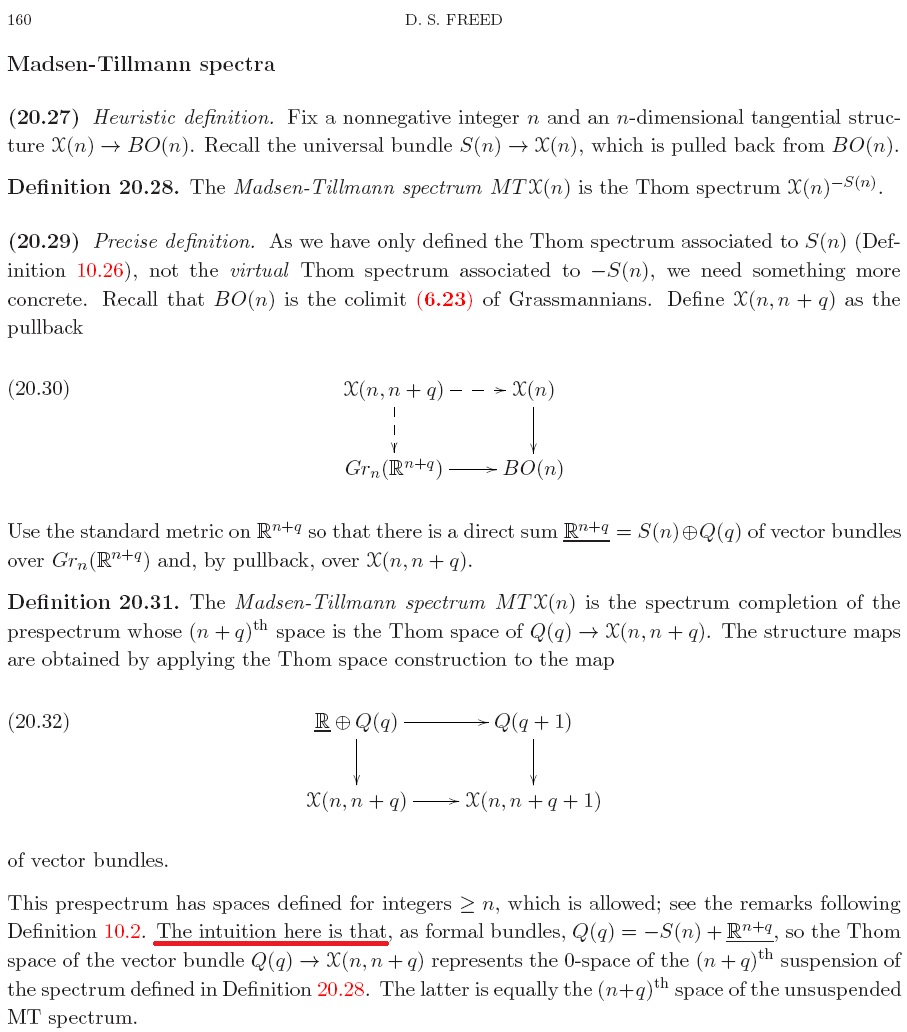 I don't think I quite get his idea, like what it means by "virtual" and why this could be more interesting or useful than the real one (I mean the usual Thom prespectrum). Could somebody give an elaborate discussion on his intuition? Of course if you have a different opinion or other intuition please do not hesitate to share with us.

PS: the answer given by Gregory below explains the motivating for introducing virtual Thom spectra. It would be even better that somebody can elaborate more on the motivation of using negative-dimensional vector bundles to define Madsen-Tillmann spectra and the specific usage of negative dimension in it.

Actually in Freed's notes there is one comment right after this which says that $MT$ does not only stands for "Madsen-Tillmann" but also for "tangential variant" of the Thom spectrum i.e. the Madsen-Tillmann spectra are tangential and unstable. I wonder whether this "tangential" and "unstable" are also tied to the negative dimensionality.

As I understand, the question is about virtual Thom spectra, rather then specifically the Madsen-Tillmann spectra. For what it is worth, here is how I like to think about this.

To understand virtual bundles and their Thom spectra, consider first bundles over the one point space. Such a "bundle" is the same thing as a vector space ${\mathbb R}^n$. The Thom space of this bundle is the sphere $S^n$ - the one point compactification of ${\mathbb R}^n$. In the world of spaces, there is no meaning to the notion of a negative-dimensional sphere. However, if you pass to the world of spectra, negative-dimensional spheres are well-defined. $S^{-n}$ can be defined as the Spanier-Whitehead dual of $S^n$, which is the same as the function spectrum $F(S^n, S^0)$. So we can say that $S^{-n}$ is the Thom spectrum of the "virtual vector space" $-{\mathbb R}^n$.

Moving to bundles over a general space $X$. To specify a vector bundle $\eta$ over $X$, say of dimension $n$, is the same as to specify a space $\tilde X$ with a free action of $O(n)$, such that that $X$ is identified with the quotient space of this action and the quotient map $\tilde X\to X$ is a fiber bundle. $\tilde X$ can be constructed as the pullback of the diagram $X \to BO(n) \leftarrow EO(n)$. Then the Thom space of $\eta$ can be defined as the quotient space $\tilde X_+ \wedge_{O(n)} S^n$. The Thom spectrum of $\eta$ is the orbits spectrum $\Sigma^\infty \tilde X_+ \wedge_{O(n)} S^n$. This expression remains meaningful if we replace $S^n$ with any spectrum with an action of $O(n)$, such as $S^{-n}$. So the Thom spectrum of the virtual bundle $-\eta$ can be defined as the spectrum $\Sigma^\infty \tilde X_+ \wedge_{O(n)} S^{-n}$. With this definition, there is an equivalence of spectra $Th(\xi \pm \eta)\simeq Th(\xi)\wedge Th(\pm\eta)$ for any two vector bundles $\xi, \eta$, where $\oplus$ stands for external direct sum.