In a fibration, where does the generic object live? 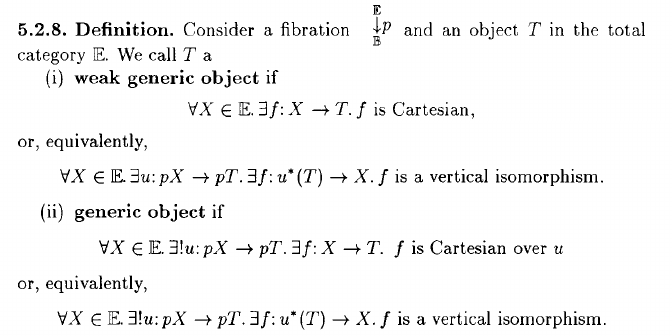 Sometimes, for instance in Bart Jacobs' Thesis, Definition 1.2.9, the unicity in (ii) is dropped, so that generic object are identified with weak generic objects.

A polymorphic fibration with $\Omega$ in the base as generic object

(my emphasis), which implies that $\Omega \in |\mathbb{B}|$ according to the notation of the definition 5.2.8.

and other lectures notes without finding any other definition of what a generic object is, and where it lives.

Am I missing some obvious equivalence, or has that object a more common synonym? I know it is sometimes called "distinguished object", for instance in those notes by Thomas Streicher, but I could'nt find any appropriate definition for that object.

I don't have Bart Jacobs' book so I don't know for sure what the context is for this extract from it, but I suspect that it is the categorical semantics of a type of types or universe such as in Martin-Löf Type Theory. This is not treated by Mac Lane or Lambek and Scott but my own book Practical Foundations of Mathematics considers related material, though not Martin-Löf Type Theory.

A fibration is a way of presenting the manner in which a mathematical structure varies according to a certain parameter. The parameter is represented by the base category $\mathbb B$ and for each value $X\in\mathbb B$ the corresponding structure is the category ${\mathbb E}_X$, which is called the fibre over $X$. As $X$ "varies" along a morphism $f:Y\to X$, this structure is related by a functor $f^*:{\mathbb E}_X\to{\mathbb E}_Y$. In a fibration, all of these categories and functors are collected together into a single category $\mathbb E$ together with a functor $p:{\mathbb E}\to{\mathbb B}$ with certain properties. In this, the fibre ${\mathbb E}_X\subset{\mathbb E}$ consists of the objects and morphisms that $p$ takes to $X$ and ${\mathsf{id}}_X$. We say informally that these objects and morphisms live over $X$.

The clearest paradigm of the use of fibrations in categorical type theory is that of types and predicates. Then the base category consists of types and terms (more precisely, its objects are contexts, ie lists of typed variables, and its morphisms are lists of terms whose types correspond to the target context and whose free variables correspond to the source). The fibre over a particular context consists of the predicates in its variables. The horizontal or prone or cartesian lifting of a base morphism at a predicate has as source the substituted form of the predicate using the terms that make up the morphism.

What is a generic predicate? Since any predicate on any type can be a substituted form of it, the free variable of the generic predicate cannot be any ordinary type but must somehow say what it is to be a predicate. If you follow through the definition, you will see that, for a strong generic predicate, this type has to be the subobject classifier $\Omega$ of a topos, whilst a weak generic predicate is the type or kind $\mathbf{Prop}$ of propositions.

We can handle universes or types of types in a similar way. Now the variables in the base category denote type-unknowns and the fibre over a particular context (list of type variables) consists of the type-expressions and terms that are definable using that list of type variables. The generic type is a single type variable qua type-expression in the fibre over the context that consists of that single type vaiable. Analogously to the previous case, its type is $\mathbf{Type}$, the type of all types. However, this can only give a weak generic type.

In fact, $\mathbf{Type}$ cannot itself be a type if you want the terms to do ordinary mathematics, with equality and functions, although it can be if you're doing domain theory with fixed points. In the former setting, such as in Martin-Löf Type Theory or Homotopy Type Theory, a hierarchy of universes is introduced; this has a corresponding hierarchy of generic types.

The naive way of doing this would be to use indexed categories, which are functors ${\mathbb B}\to{\mathbf{Cat}}^{\mathsf{op}}$. In the applications in pure mathematics, we get pseudofunctors instead, where we have to take account of isomorphisms and coherence thereof; this was the reason for using fibrations instead, as explained in a paper of Bénabou that is notorious for its personal language. In the applications to type theory, on the other hand, these isomorphisms are unnecessary because the syntax ensures functoriality.

A deeper objection to indexed categories is that the functors mix up internal and external notions and making sense of them in the usual foundational setting (sets or toposes) requires the axiom-scheme of replacement. Using fibrations avoids this and potentially allows us to understand replacement in the context of a topos (see the final pages of my book).

The categorical technology that I prefer to fibrations is that of a category with a class of display maps, which is set out in Chapter VIII of my book.

In the applications of fibrations to type theory, each fibre usually has a terminal object, with which we can identify the objects of the base category, and we just work in the total category of the fibration (its source qua functor). The display maps are the terminal projections in each fibre, from which we recover the fibration as the codomain.

In the paradigm of types and propositions above, an object of the total category is a list of types together with a predicate on them. We may think of this as a subset of a product of sets, or just a mono. A morphism is a commutative square, which is a pullback iff the morphism is prone (horizonatal, cartesian). A base object (context) consists of a list of types together with the true predicate, or a set considered as the entire subset of itself. The display map corresponding to a particular object (mono) is the square consisting of this mono on the vertical sides and identities on the horizontal sides, though more briefly we take it to be the mono.

We can think of the display map in terms of its fibres. In the case of a predicate on a single type (or subset of a set), the fibre over an element is the truth-value of the predicate at that element, where we think of a truth value as a subset of the singleton. The mono displays these truth values over the set in that the source of the display map is the disjoint union of these sub-singletons.

I leave it as an exercise to see why the map $\top:{\mathbf 1}\to\Omega$ in a topos is the display of all possible truth values over their names.

I proposed the word prone in this subject because the notion has nothing to do with Descartes and the word cartesian, like regular and normal, is grossly over-used in mathematics. Morphisms of the total category that the fibration takes to identities have been called vertical. However, there are two ways in which morphisms can be orthogonal to vertical morphisms, whilst the English language conveniently provides two words for horizontal, namely prone (face up) and supine (face down).

On the very same page (p. 326), Bart Jacobs writes, in the proof of a proposition:

So even if that convention is never explicitly written, it is reasonnable to assume that Mike Shulman is right when he writes as a comment

I think he means there is some unnamed object in $\mathbb{E}$ such that $p$ of that object is $\Omega$.

Not the answer you're looking for? Browse other questions tagged ct.category-theory type-theory or ask your own question.

5
Where does the generic triangle live?
0
The “skinnest” object
2
Codomain fibration.
7
Presentability of the source of a fibration
0
What does an object of isomorphisms look like?
3
Does every bicategory have a “delaxing object”?
11
Does Dyer's Thesis prove that the sheaf/fibration equivalence fails in dimension n>2?
5
A topos where every object is internally projective but not every object is projective
9
On model categories where every object is bifibrant
Question feed