A favorite fun problem I give to students and (even non-mathematical) friends is the following:

Find a decomposition of an equilateral triangle into three similar polygons, exactly two of which are congruent.

There is a cute solution which the persistent reader will find. (By the way, the problem is not mine. I believe I saw it in an old Hungarian problem book, but I don't recall for sure.)

The funny thing is that everyone seems to find the same solution as my own. I sort of expected other solutions to crop up. So I am led to ask:

Is there a unique such decomposition (up to isometry)?

Apologies if this pushes the MO boundaries a little. I am probably not alone in wondering about this, though. And it seems to compare well with a few other "elementary geometry" questions on MO.

For a hint leading to (what I think is) the standard (unique?) solution, see this: http://en.wikipedia.org/wiki/File:Tile_3,6.svg

A solution is given here (click on the second snapshot). The accompanying text says,

Dissecting a regular triangle into three similar polygons, two of them of the same size, looks quite impossible at first glance.

Hence it is no wonder that this problem was unsolved until 1987, when the author of this Demonstration [Karl Scherer] stumbled upon it as part of working on his book "A Puzzling Journey To The Reptiles And Related Animals" on irregular rep-tiles. The surprising solution can also be found in his Zilllions game 'Isolattice'. The solution became widely known when Martin Gardner published it.

No details are given for the Gardner publication.

Also worth a look is this paper, Shigeki Akiyama, Jun Luo, Ryotaro Okazaki, Wolfgang Steiner, Jörg Thuswaldner, Similar dissection of sets, which proves an equilateral triangle can be dissected in three similar copies whose areas have ratio $1:1:a$ for $a\ge(3+\sqrt5)/2$. But I think the solution is in fractals, not polygons. This paper also gives the Gardner citation. 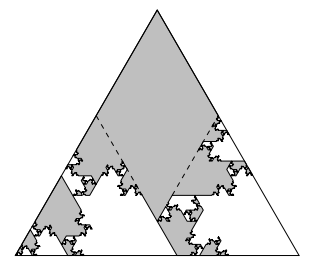 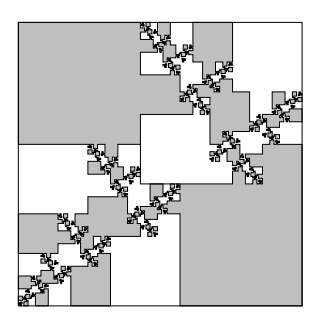