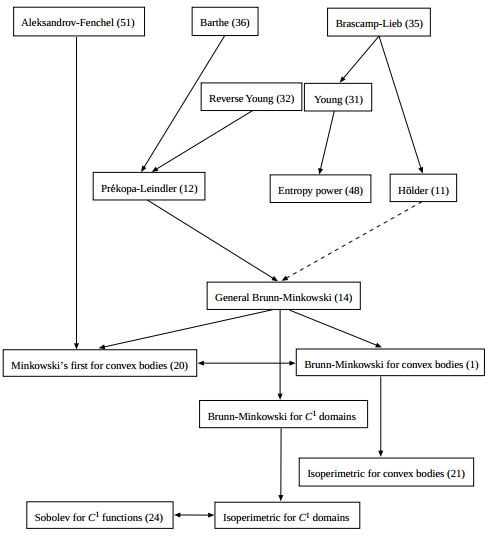 I'm a bit hesitant to resurrect an old post, but as a result of some of the things I worked on recently, I'd like to share a new answer to the question in the title. Hopefully some will find it interesting.

To clarify why \eqref{entropyBM} implies the BMI, note that if $X$ is supported on a compact set $K$, then $e^{H(X)}\leq m(K)$, with equality iff $X$ is uniformly distributed.  Thus, for $X$ and $Y$ uniformly distributed on compact sets $K,L\subset \mathbb{R}^n$, respectively, the sum $X+Y$ is supported on the Minkowski sum $K+L$, and \eqref{entropyBM} gives: $$ m(K)^{1/n} + m(L)^{1/n}   \leq \sup_{\text{couplings of }X,Y} e^{H(X+Y)/n} \leq m(K+L)^{1/n}.   $$ The slack in the second inequality is governed precisely by the relative entropy between the distribution of $X+Y$ and the uniform distribution on $K+L$, minimized over all couplings. In this sense, it gives a quantitative reinforcement of Terry Tao's last sentence:

except we can strike the word independent.

I'll close by saying a few words about how \eqref{ISIT2021} comes about. In the Gardner figure reproduced above, one can place a larger family of inequalities at the top of the hierarchy that implies the Brascamp-Lieb (B-L) inequalities, the Barthe inequality, and the reverse Young inequality. Jingbo Liu (together with myself, Cuff and Verdu) introduced this family of inequalities in [1], and called them "forward-reverse" B-L inequalities because they simultaneously generalize the "reverse" B-L inequality due to Barthe, as well as the original forward/direct B-L inequalities. In their 2009 paper, Carlen and Cordero-Erausquin observed that the direct B-L inequalities have an equivalent dual formulation in terms of Shannon entropies [2]. The same can be said for the class of forward-reverse inequalities; it was this connection to entropies that motivated our original study of the forward-reverse inequalities. Inequality \eqref{ISIT2021} can be considered as one instance of the latter in the Euclidean setting, which retains much of the nice structure Bennett, Carberry, Christ and Tao [3] described for the direct B-L inequalities (see [4] for the forward-reverse setting). Thus, coming back to the original post, it is possible to see how everything fits neatly into a larger hierarchy than the one depicted by Gardner (or, rather, an entropic dual formulation of Gardner's hierarchy), where the "entropy connection" between the EPI and BMI can be made more transparent.

Of course, as Mokshay Madiman pointed out in his answer, both the EPI and BMI can be obtained as limiting cases of Young's inequality, which can be stated in terms of three different Rényi entropies, thereby giving some kind of "entropy" proof of the BMI. However, I think the spirit of the original question was asking about Shannon entropies, for which this answer might be more satisfactory.

[2] Carlen, Eric A., and Dario Cordero–Erausquin. Subadditivity of the entropy and its relation to Brascamp–Lieb type inequalities. Geometric and Functional Analysis 19.2 (2009): 373-405.

33
What's the motivation of entropy as a combinatorical tool? What problems is it able to solve?
2
Shannon's proof of the entropy power inequality