Here Hamming distance between two Hamiltonian cycles is the is $N-$ the number of shared edges. $N$ is the number of nodes in the graph. The upper bound is $N/2$.

EDIT: I conjecture that it is at least $\Omega(\log N)$ and I even conjecture a tighter lower bound of $\Omega( \epsilon N)$ for some constant $\epsilon \gt 0$.

Let me maybe just formulate the comment as an answer.

It is easy to see that the lower bound can't be 1. Assume that $H_1$ contains the edge $e$, and $H_2$ does not contain $e$. If the edge $e$ is not contained in a triangle, then it has 4 adjacent edges. Then $H_2$ has to contain all 4 of these edges, while $H_1$ can only contain 2 of them, so the hamming distance is at least 2. If the edge $e$ is contained in a triangle, then $H_1$ and $H_2$ can share at most one edge of the triangle and at most one of the incoming edges of the triangle, or no edge of the triangle and two of the incoming edges. In either case the hamming distance is at least 2.

Of course the graphs above have girth 3, so it might be possible to give a better lower bound as a function of the girth of the graph. 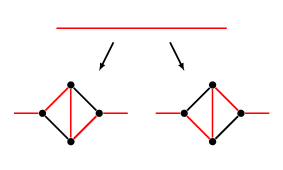 Not the answer you're looking for? Browse other questions tagged graph-theory computational-complexity hamiltonian-graphs or ask your own question.