I'm looking for an algorithm that will subtract a rectangle from a simple, concave polygon and return a remainder of polygons. If the rectangle encloses the polygon, the remainder is null. In most cases, it looks like at least one edge will be shared between the rectangle and the polygon.

I've been digging around the internet, but I've not found a good lead.

Can someone point me in the right direction?

Edit I did some more digging and found a few polygon clipping algorithms. However, all of the ones I found finds what is inside the clipping region. I want all of the stuff outside as separate rectangles.

I suggest you investigate the CGAL manual, Chapter 19: "2D Regularized Boolean Set-Operations". Here is an example of polygon difference:

This is well-understood & explored algorithmically, but nevertheless a very delicate computation, as the term regularized indicates. You are subtracting a rectangle, but there is nothing special about a rectangle—"degenerate" situations may occur. You really need to consider the general situation. So I recommend you look at general resources, such as

The upperleft corner of Murta's Fig.2 illustrates a complicated polygon difference (and the remaining images illustrate other Boolean operations). 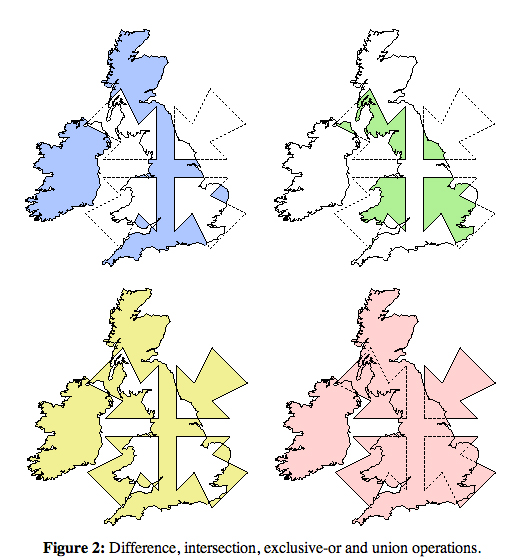 Not the answer you're looking for? Browse other questions tagged computational-geometry or ask your own question.

0
Detect perimetral edges of a polygon