Here is a completely new reformulation of almost the same problem. I hope it is more attractive to mathematicians.

A binary tree is either:

Our game is parameterized by two natural numbers $N$ and $K$; its initial configuration is a pair $\langle N, \mathit{Leaf} \rangle$. The game consists of $2^K-1$ rounds. At each round:

If at the end of any round the tree is not optimal, or the number $N$ from the configuration is negative, player A wins. Otherwise, after $2^K-1$ rounds, player B wins.

Question: given $K$, for which $N$ does player $B$ have a wining strategy?

The following question I asked on my very first course in Algorithms, just when I had started my studies. I am not interested in discrete mathematics that much anymore, but would be very delighted for any approximation of the answer (I have never got any).

[edit]A binary tree over alphabet $\Sigma$ is either:

That is --- a binary tree over $\Sigma$ is an element of the free algebra over $X \mapsto 1 \sqcup X \times \Sigma \times X$. A binary search tree, is a binary tree over a linear order $\Sigma$, where for each node $\langle L, \sigma, R\rangle$ we have that $\sigma$ is no less than any element from its left subtree, and less than any element from its right subtree.[edit]

A binary search tree is search-optimal if the difference between its longest and shortest path (starting from the root to a leaf) is at most one.

[edit] This condition is much stronger than being an AVL tree. The height of a tree is the longest path from its root to one of its leaf. We say that a tree is AVL if at any node the difference between the heights of its left and right subtrees is at most one. For example Fibonacci trees are AVL, but may have arbitrary large difference between their longest and shortest path. [edit]

A binary search tree is perfect if at any node the difference between the numbers of internal nodes in its left and right subtrees is at most one.

Our task will be to maintain search-optimal tree during consecutive insertions. We shall use maintenance strategies based on the concept of “partial rebuilding” --- that is whenever after insertion the tree is out of search-optimal shape, we choose one of its node, and rebuild the whole subtree rooted at that node to the perfect tree (the cost of this operation is equal to the number of nodes in the subtree).

What strategy has the best worst-case complexity, and what is its complexity?

[edit] A more mathematical version of the question. Suppose that we start from the empty tree and have to maintain it during $2^k-1$ insertions. The cost of rebuilding a subtree having $n$ nodes is $n$ euros. What strategy guarantees that we spend the smallest amount of euros in the worst-case? [edit]

Notice that rebuilding a tree at the lowest possible node is not optimal --- for example in the following situation it is much better to rebuild the whole tree than its right subtree ([edit from the comment] the picture shows only internal nodes [edit]): 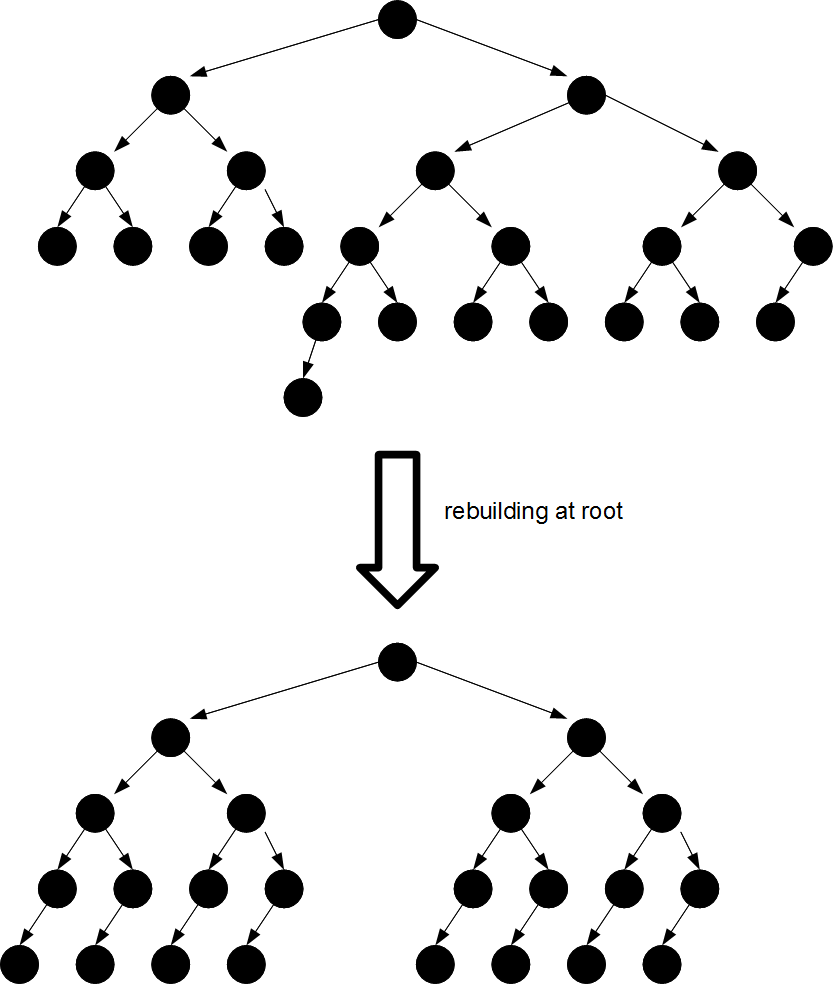 See this survey paper for several types of binary tree balancing. You will see things quite similar to your suggestions. However, I'll also note that what you call "search optimal" is not much use as you define it since it applies to a tree which is a single path, or just two paths of equal length.

Update: above is wrong, see comment of Michal R. Przybylek.

4
Minimal labeling of a directed acyclic graph
2
Maximal Antichains in a Colored Tree
5
Average number of distinguished leaves in a binary tree
7
Counting some binary trees with lots of extra stucture
3
How many graphs of order n, maximum degree k, and maximum diameter d exist?
6
Does a bounded branching/log depth dihotomy hold for rooted trees?
8
Identifying a subset with as few tests as possible
3
Game theory approach to Trans Europa
Question feed