Let's define half discrete-analytic function as a function whose Newton series converges to that function for each $x>0$:

Let's define weak discrete-analytic a function a function whose bi-directional Newton expansion converges to that function at any real $x$:

So what is the maximum $a$ such that $\sin ax$ is half discrete-analytic?

This question is motivated by my old search for a natural fractional integration and integration constant (integral analog of Ramanjuan sum). I want to find a natural generalization of Newton series to functions whose Newton series normally diverges. Once that accomplished it would be possible to find Newton expansions for consecutive derivatives of a function and by analytically continuing them into negative domain, get natural integral. Unfortunately finding natural fractional integral of even such simple function as $\sin x$ requires building Newton expansion for $\sin \frac{\pi x}2$ which diverges.

Closed form here involves some ${}_2F_1$ functions, so I cannot provide proofs. Numerically, though, it seems that $\sin(ax)$ is weak discrete-analytic for $a$ up to some value just above $3$. Maybe $\pi$, I guess. 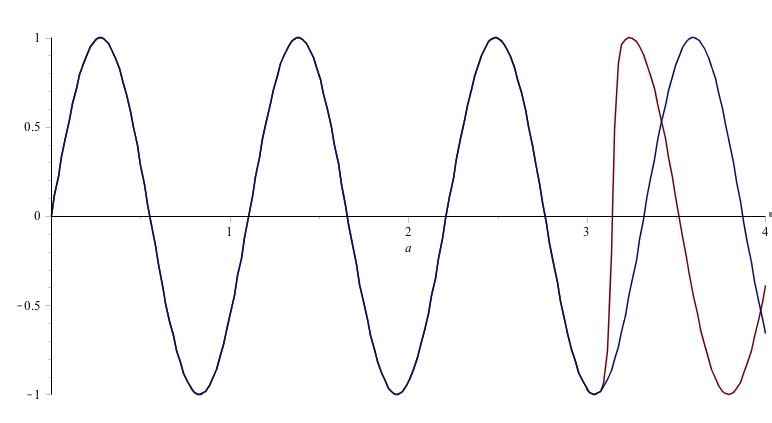 3
If two functions are equal to their Newton series, is their composition also equal to its Newton series?
1
Uniqueness of Newton (modulo a constant) series on a compact set
0
Where the following interpolation method converges?

5
Is Zeta function discrete-analytic?
0
Are all discrete-analytic funtions as defined here also natural?
3
Convergence of a Trigonometric Series
3
If two functions are equal to their Newton series, is their composition also equal to its Newton series?
11
If the generating function summation and zeta regularized sum of a divergent series exist, do they always coincide?
10
Newton series and Fourier transform - is there an analogy?
Question feed