How small parallelograms are we guaranteed to get, when we select the two sides from different plane lattices?

Title question description: Select two lattices $\Lambda_1$ and $\Lambda_2$ (here a lattice=additive free abelian group without accumulation points) of maximal rank two in the real plane. We normalize the lattices in such a way that the fundamental region has area $=1$. Let $B(r)$ be a disk of radius $r$ centered at the origin. Let $N_1,N_2>0$ be two parameters. Select one non-zero vector $\vec{v}_1$ from $B(N_1)\cap \Lambda_1$ and another $\vec{v}_2$ from $B(N_2)\cap \Lambda_2$. Consider the area of the parallelogram with sides $\vec{v}_i,i=1,2.$ Let $D(N_1,N_2)$ be the minimum area of such parallelograms. We want to make the function $D(N_1,N_2)$ as large as possible by selecting the lattices $\Lambda_1$ and $\Lambda_2$ in a clever way. The simplest form of my question is: what can we say about the asymptotic behavior of $D(N_1,N_2)$ as the parameters $N_1,N_2\to\infty$ (either separately or jointly)? As additional questions I would like to ask: Does this ring a bell? What kind of methods have been used in studying this problem? What methods would you use? 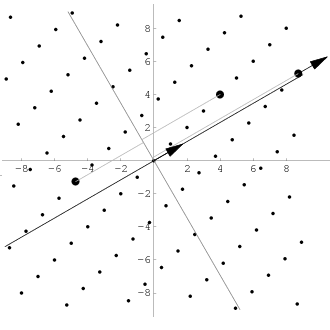 In the above image the short arrow is the vector $\vec{v}_2$. The black line is the subspace generated by it, and the grey line is the orthogonal complement. The dots mark the points of the lattice $\Lambda_1$. Two points with nearby projections have been singled out by using larger dots. As is their difference vector $\vec{v}_1$, whose projection is then predictably very short. I also drew another copy (= the other arrow) of $\vec{v}_2$ to begin at the endpoint of $\vec{v}_1$. The two copies of $\vec{v}_2$ are a pair of parallel edges of the parallelogram. The small parallelogram has base $=|\vec{v}_2|$ and height = the length of the projection of $\vec{v}_1$ on the grey line. When drawing this image, I was selecting the lattice points from a square shaped region as opposed to a disk. The effects of that change can be absorbed into the constant $K$, and can IMHO be ignored.

Using real quadratic number fields and Liouville's theorem it is easy to construct lattices $\Lambda_1$ and $\Lambda_2$ in such a way that we always have $$ D(N_1,N_2)\ge \frac{K'}{N_1N_2}. $$ In this sense the pigeon hole bound from the previous paragraph has the correct order, when $N_2=L_{2,\min}$. Ideally I would like to apply Minkowski's bound to the direct sum of the lattices, but the determinant of a 2x2 real matrix is a quadratic form of signature (2,2), so I don't see how to select a usefully large convex region with small determinants (in absolute value). In light of this I think a natural main question would be

With the word effectively I mean that a bound should decrease, when we increase either $N_1$ or $N_2$. For example, in the above application of the pigeon hole principle we can trivially switch their roles to get a symmetric function $D(N_1,N_2)\le K\max\{N_1,N_2\}^{-1}$, but this is not effective :-)

The problem we really want to solve: Let $\Lambda_i, i=1,2,\ldots,U$ be lattices of complex (resp. real) $r\times n$ matrices, $n=rU$ of maximal possible rank $2rn$ (resp. $rn$). Select non-zero matrices $X_i$ from $\Lambda_i\cap B(N_i)$. Build an $n\times n$ matrix $X$ by putting these blocks on top of each other. What can we say about the minimal absolute value $D(N_1,N_2,\ldots,N_U)$ of $|\det X|$? We have generalizations of the pigeon hole bound, the best given by a graduate student in our group: http://arxiv.org/abs/1201.5744. He also has a construction based on algebraic number theory and Shidlovskii's bound from Diophantine approximation here: http://arxiv.org/pdf/1202.0675.pdf. That construction meets the pigeon hole bound in the case that $N_2,N_3,\ldots,N_U$ are small constants. Other researchers had earlier given somewhat similar constructions, but Shidlovskii's bound gives worse estimates to their $D$-function - Toni Ernvall managed to keep the matrix entries in a smaller field, which helped quite a bit. My gut feeling is that the constructions are closer to the optimal than the pigeon hole bound, because the latter is kinda trivial.

In the case $U=1$ the answer is known, because then we only need to select a single rank $2n^2$ of complex $n\times n$ matrices. If the said lattice is (a scaled version of) an order of a division algebra of index $n$ with an imaginary quadratic number field as a center, then the determinants will be bounded away from zero. Whenever $U>1$ the pigeon hole bound forces arbitrarily small determinants to occur.

Background: All this is related to the problem of estimating the performance of these lattices as signal sets for multiantenna radio communication: a single row = the signal of a single transmission antenna, $U$ is the number of simultaneous users, a lattice is the signal set of a fixed user. The study of the function $D(N_1,N_2,\ldots, N_U)$ is related to certain asymptotice figures of merit, but unfortunately the information-theory goes over my head. Some colleagues had hoped that it would be possible to have determinants bounded away from zero also, when $U>1$. The pigeon hole bound was our way of showing that they were asking too much. The math is not too hot, but it earned me a trip to ITW2010 in Cairo, so I got to see the pyramids!