Let $M(n)$ be the Mertens function.

Q1 Is there a bias (negative or positive) in Mertens function?

Q2 Is there a provable bias in some generalizations of Mertens function, e.g. in number fields or in arithmetic progression $M(an+d)$?

Plot of $M(x)$ with coloured bias: 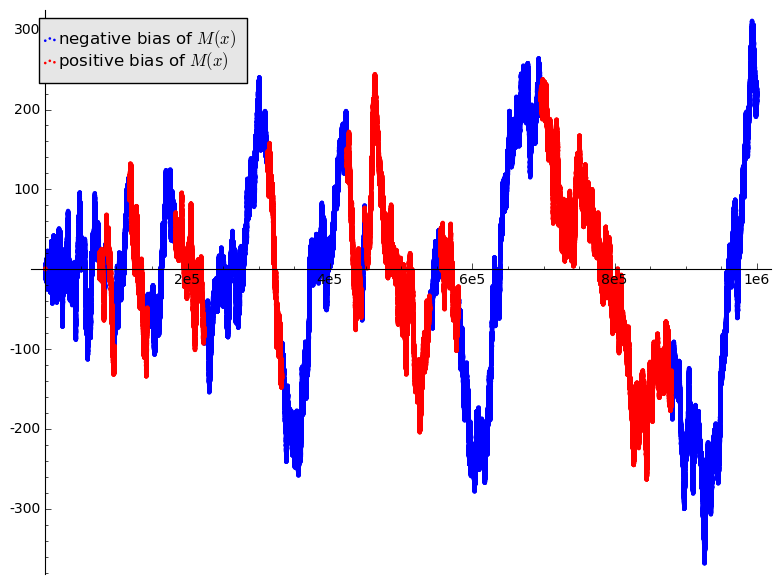 Somehow I missed this question when it was originally asked. I'm not entirely sure what you mean by a negative bias; the bits you've highlighted in the graph of $M(x)$ aren't when $M(x)$ is negative, but rather where is is, in some sense, "decreasing on average", and I don't know how to formalise that notion. If you're actually interested in the set of $x$ for which $M(x)$ is negative, then it seems clear from the graph that this happens roughly half the time. Here's how to make that notion formal.

Interestingly, if you consider instead the weighted sum $$M_{1/2}(x) = \sum_{n \leq x}{\frac{\mu(n)}{\sqrt{n}}},$$ then there is a negative bias; this follows from the same methods in my article that kolik linked to, together with the explicit expression $$M_{1/2}(x) = \frac{1}{\zeta(1/2)} + \sum_{\rho}{\frac{x^{\rho - 1/2}}{(\rho - 1/2) \zeta'(\rho)}} + R(x),$$ where the sum is over the nontrivial zeroes of the Riemann zeta function, and $R(x)$ is some small error term. Other than this, I don't know much about other biases, though it should be the same in number fields, and I recently wrote a paper about this kind of thing in function fields, based on previous work of Byungchul Cha (in which he does not explicitly state the analogous result of there being no bias, though it is clear from the results).

Edit: I forgot to mention Brent and van de Lune's recent paper, where they look at a form of the Lambert series generated by $\mu(n)$ and show that it is negative as $x$ tends to $1$ from below (as juan mentioned in a comment above). But this really isn't telling you anything other than that the Riemann zeta function is negative at $s = 0$, which is a much weaker statement than, say, a pole whose residue is negative (as is the case with the summatory function of the Liouville function).

Assuming some well-known conjectures, Nathan Ng established the existence of a limiting distribution for $e^{-y/2}M(e^{y})$. This paper can also be found on the arXiv: http://arxiv.org/abs/math/0310381

The paper on summatory function of the Louiville function, mentioned in kolik's answer, uses many of the same techniques.

I believe that this paper

By one of the members of MO, will have some relevant answers for the closely related case of the Liouville function.