What nets fold to polyhedra?

There is a classic (and open) problem asking whether every polyhedron can be unfolded to give a non-overlapping net. The converse problem has been studied asking which polygons can be folded in some manner to give a polyhedron. For an overview of both problems and related discussion see:

I want to ask about a more direct converse. Given a net of polygons connected at their edges when can they fold to form a polyhedron?

As an example take the two nets shown below. By identifying the edges as shown by colour both satisfy the topological constraints to be sphere. 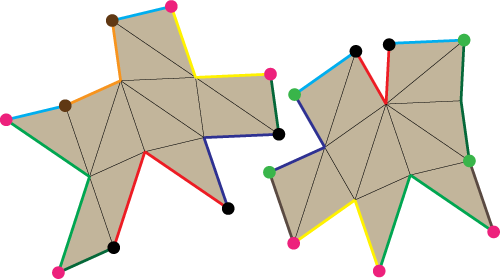 Only one, however, will fold to give a polyhedron: 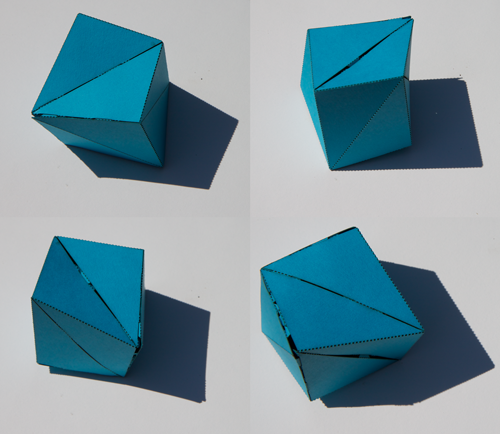 My motivation is to find visually appealing, simple, but non-symmetric, polyhedra. I have used equilateral triangles but would like to play with other shapes. General sufficient conditions would, therefore, be very interesting to me.

A net $P$ can fold to a polyhedron iff there exists what I called in the book you cite an Alexandrov gluing, which is

an identification of its boundary points that satisfies the three conditions of Alexandrov's theorem [the subject of a recent MO question]: (1) The identifications (or "gluings'') close up the perimeter of $P$ without gaps or overlaps; (2) The resulting surface is homeomorphic to a sphere; and (3) Identifications result in $\le 2 \pi$ surface angle glued at every point. Under these three conditions, Alexandrov's theorem guarantees that the folding produces a convex polyhedron, unique once the gluing is specified.

Let me quote two results from the book, informally, the first quite disappointingly negative, the second compensatingly positive:

In particular, for example, a square folds to an infinite number of convex polyhedra, whose space consists of six interlocked continuua, as detailed in our book (Fig.25.43,p.416).

The exact question you pose—Which nets can fold to convex polyhedra?—remains open. Although if you give me a specific net, we have an algorithm that will produce all the convex polyhedra to which it may fold. But note my emphasis on "convex," an adjective you left out in your question. That is Open Problem 25.1 in our book (p.384), on which topic I have written a separate note subsequent to the book's publication: "On Folding a Polygon to a Polyhedron." In a nutshell: every polygon folds to some (generally) nonconvex polyhedron, by a result of Burago and Zalgaller. But their proof is complex enough that I have no understanding what that polyhedron might look like.

Aside from the paper I cite above, you may be interested in this result: Four of the five Platonic solids may be "unzipped" and "rezipped" to be doubly covered parallelograms (which may conveniently be placed in your wallet!). See this MSE question for the (difficult to find) icosahedron net [below]. The holdout here is the dodecahedron, whose 43,380 edge unfoldings each may only fold back to the dodecahedron. 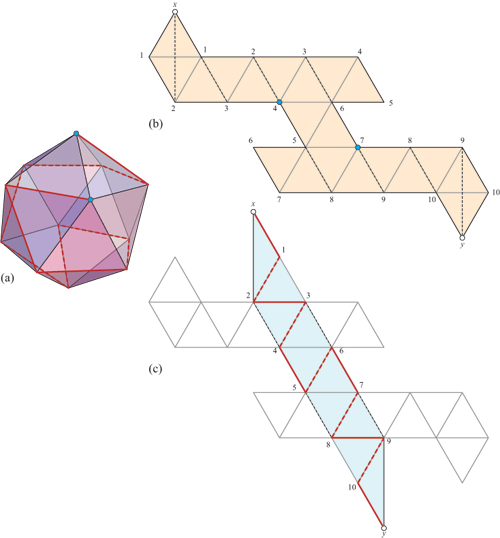 Not the answer you're looking for? Browse other questions tagged reference-request mg.metric-geometry discrete-geometry polyhedra or ask your own question.