Squares in an Arithmetic Progression

While this proof is slick, it is natural to want to avoid having to use anything as powerful as Szemeredi's theorem. I recently I ran across the paper "On the Number of Squares in an Arithmetic Progression" by Saburo Uchiyama (Proc. Japan Acad. 52, no. 8 (1976), 431-433). The complete paper is freely available here. The paper claims to give a simple and self-contained solution to Erdős' question (that $A(x;a,b) = o(x)$). In fact, the proof given is so short that I will repost it in its entirety: 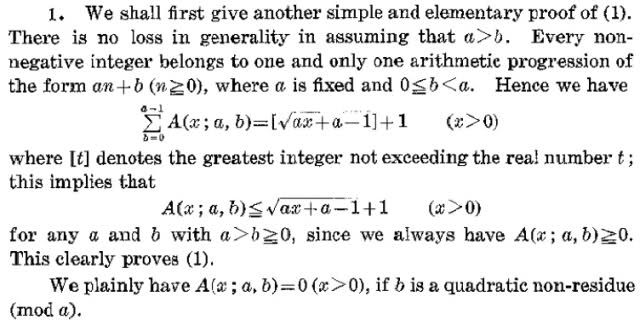 Since this is so short and simple (and I have never seen the argument cited anywhere) I am skeptical, however perhaps I am missing something obvious.

(Perhaps, it should be pointed out that there is a more recent approach to the problem that yields better quantitative bounds that goes through Falting's theorem due to Bombieri, Granville and Pintz. In fact, their analysis shows that the case when $a$ is large compared to $x$ is the 'hard case', which raises further suspicion of the above argument.)

Not the answer you're looking for? Browse other questions tagged co.combinatorics nt.number-theory arithmetic-progression or ask your own question.