Primes that are the sum of three squares

This is in some sense an extension of the earlier MO question, "Gaussian prime spirals." Gaussian primes in the complex plane, $a+b i$, require $a^2 +b^2$ prime off the axes. The generalization to quaternions leads to Hurwitz primes $a + b i + c j + d k$, which require $a^2 + b^2 + c^2 + d^2$ prime (here I am ignoring the Hurwitz integers whose components are in $\mathbb{Z}+\frac{1}{2}$). So this suggests exploring points in $\mathbb{Z}^3$ with $a^2+b^2+c^2$ prime. (I realize this ignores the nice algebraic properties of complex numbers and quaternions.)

The Gaussian prime spirals were created by walking along a lattice direction and turning left at Gaussian primes. The generalization is to start at a point $p \in \mathbb{Z}^3$, walk along a lattice direction until a point $(a,b,c)$ is hit with $a^2 +b^2 + c^2$ prime, and then turn. It makes sense to iterate through the six lattice directions, $(+x,+y,+z,-x,-y,-z)$, in that order. The result seems again to be a closed cycle. Here is one example, with $p=(30,40,10)$ (marked in red), which cycles after encountering 739 "primes" (marked in yellow): 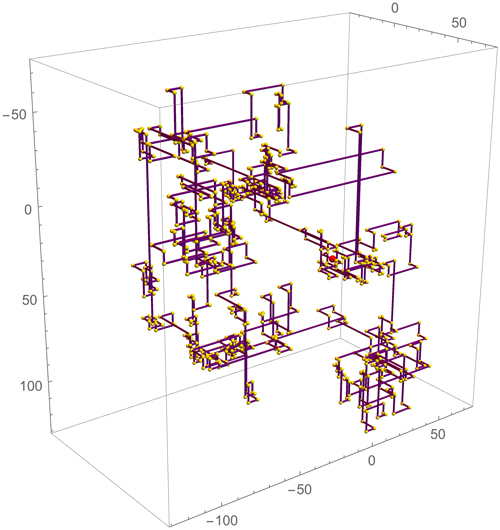 It appears that whether or not every Gaussian prime spiral cycles runs up against long-unsolved problems. What is the situation with these 3D "prime" spirals? Is there much known about the density and distribution of primes that are are sum of three squares? Are there theorems or conjectures that would either imply all spirals are closed, or the opposite, that there should exist infinite unclosed spirals?

However, your construction involves fixing two coordinates, say $x=a, y=b,$ then varying $z$ in either direction and hoping to find another prime. This is still unsure, for example if $a^2 + b^2 = 1,$ nobody knows for sure that there are infinitely many primes of the form $1 + z^2.$

For what it may be worth, Siegel's theorem gives an exact answer for the number of representations of a given number $n = x^2 + y^2 + z^2$ because the form is alone in its genus. I also gave a version in the style of Guass at Is there a simple way to compute the number of ways to write a positive integer as the sum of three squares? Meanwhile, following Linnik, the main result in Duke and Schulze-Pillot (1990) is that the lattice points on the sphere are asymptotically equidistributed.

About Guass, I had a girlfriend who had taken Latin, and expressed a desire to write a murder mystery with hero Dexter, while only in the last few pages do we find out about the evil twin Sinister. The class had a motto, Semper Ubi Sub Ubi or Always Wear Underwear.

Not the answer you're looking for? Browse other questions tagged prime-numbers complex-geometry quaternionic-geometry discrete-geometry or ask your own question.

8
Asymptotics for primality of sum of three consecutive primes
137
Gaussian prime spirals
6
On permuted sum of squares of primes in a list
19
Sums of primes that are themselves prime
16
Primes that are sums of two squares with constraints on the squares
16
Relatively primes spirals
8
Quadratic reciprocity for three primes?
Question feed