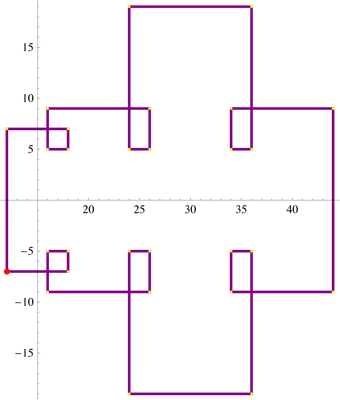 Instead, starting at $3+5 i$, again $+x$, this (pleasingly symmetric!) closed cycle results: 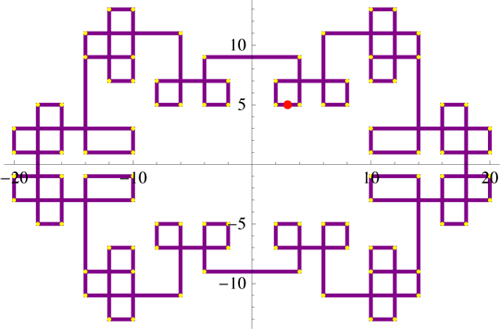 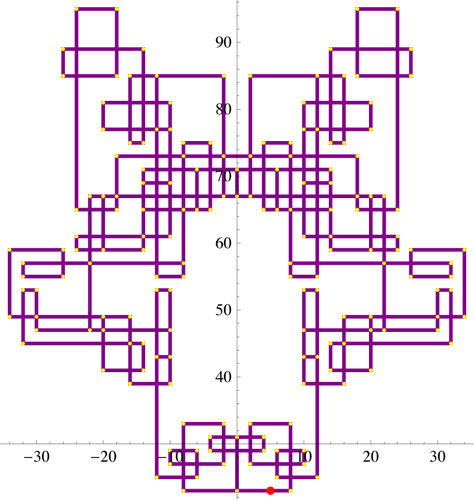 Q1. Does the spiral always form a cycle?

Q2. Have these spirals been investigated previously?

(I am about to step on a plane; apologies for not acknowledging responses!) ...Later:

Expanding slightly on Greg Martin's answer, the symmetry applies across the imaginary axis as well as the real axis, so the only way a path can avoid closing up is if it crosses at most one axis at most once (and if it does cross an axis, the path -- if extended in the backward as well as forward direction -- will be mirror symmetric with respect to the axis it crosses). Note that within a quadrant the horizontal (respectively vertical) steps are alternately toward and away from the imaginary (respectively real) axis.

Intuitively the steps, on average, get larger the further you are from the axes. So if you're in the first quadrant and take a step to the right and then a step up, you expect your next step, to the left, to be somewhat larger than your previous step to the right (and similarly with the next step down, assuming you're still in the first quadrant). So in a sense the axes are exerting kind of a gravitational tug on sort of a random walk. Of course, nothing of the sort is literally going on. Still, it seems hard to imagine the stars (I mean Gaussian primes) aligning to keep a random walk going in perpetuity. 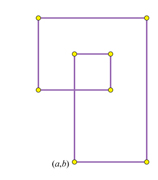 (Sorry, if someone could replace that with a picture, that would be helpful.) As "unknown" pointed out, there are certainly closed square paths that stay in the first quadrant. There are also rectangles, such as the $2\times4$ rectangle with $8+13i$ for its lower left hand corner and the $2\times6$ one starting at $14+19i$. (I spotted these in a picture of Gaussian primes of norm less than 1000 in the paper "A Stroll Through the Gaussian Primes" by Gethner, Wagon, and Wick.) One might expect a souped-up (supped-up?) $k$-tuple conjecture to predict the existence of any closed-path pattern that isn't forbidden by the usual suspects. (Part of the souping up, though, is that not only are there primes at the specified corners, but everything else along the edges is composite.)

All in all, a nice problem -- and the spirals, reminiscient of Celtic knots, are really lovely!

Stan Wagon, coauthor of the award-winning article "A Stroll through the Gaussian Primes," became intrigued, and sent me these two stunning images. The first is a different rendering of the 2,956-cycle I posted earlier:

The second is a Rorschach-like cycle of 316,268 primes he found:

Soon there will be a Mathematica Demonstration Project on this topic; it currently awaits approval.

Update. The Mathematica Demo is available at this link: 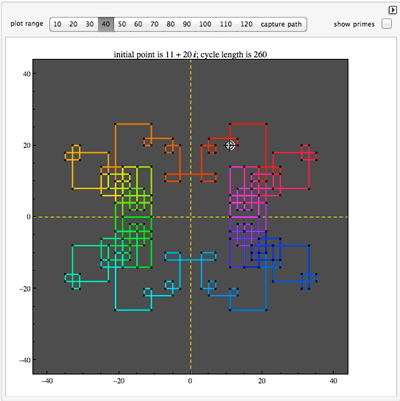 (16Feb13): Stan Wagon worked with Walter Stromquist, the editor of Mathematics Magazine, on the cover of the February 2013 issue, which displays the spiral immediately above: 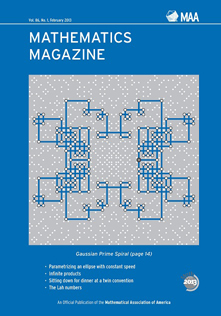 Just for your amusement, here is a spiral of length 2,956 primes that crosses just one axis, and hits no prime on that axis. I encountered it twice, once in a horizontal orientation (seed: $12+28 i$) and once in a vertical orientation (seed: $43 + 55 i$). That it should occur twice is a consequence of the symmetry of the conditions that render a Gaussian integer prime.

Also, heuristically, if you believe the kind of heuristics behind the Hardy-Littlewood $k$-tuple conjecture, the same kind of reasoning should give you the conjectural asymptotics for

Note that if you start above the real axis, and then one of the steps takes you below the real axis, then the subsequent path will be the mirror image (complex conjugate) of the start of the path. In your second picture, this accounts for the whole left half of the spiral (starting at $3+5i$ and pausing at $3-5i$). Then, if the continuation happens to cross the real axis again, the rest of the path will close up into a closed loop. (This ignores the case where the point on the real axis itself is a Gaussian prime.)

Below is an example: 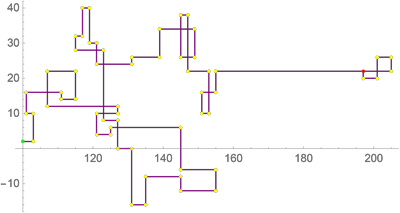 Green: start at $c=100 + 2i$. Red: looped at $197 + 22 i$. Yellow: Gaussian prime turn. Although this runs into the same open-problem impediment cited by @FrançoisBrunault,* it appears that, for a random starting $c_0$ within some fixed distance of the origin, the probability of eventually looping might be $1$. Looping is much "easier" to achieve than is spiral cycling, which requires revisiting $c_0$ from the left, whereas looping just needs to revisit some prime twice.

* "It's unknown whether there are infinitely many Gaussian primes of the form $n+i$ with $n \in \mathbb{Z}$. So starting at $N+i$ and moving $+x$, we cannot exclude the possibility of hitting no prime."

Not the answer you're looking for? Browse other questions tagged prime-numbers discrete-geometry or ask your own question.