I'm working on a problem which is to find the closest trio of neighbours for a set of arbitrarily placed non-intersecting ellipses. As a new user I'm not allowed to include image tags but I've included the URL at the bottom of the page as I always think I'm better able to explain myself with visual aids. The picture demonstrates what I mean with Apollonius circles connecting the 3 nearest ellipses to one another.

So far I have tried using the minimum distances between the ellipses and modifying Delaunay Triangulation, via incremental and sweepline methods, used various techniques involving in circles of triangles formed between every 3 ellipse configuration etc, and attempted to estimate the neighbours with bounding boxes, and have completely run out of ideas of how to actually get this working efficiently

Although I have worked out a solution it involves exhaustively searching and comparing every trio of ellipses with every other ellipse and has a time complexity of n(n-1)(n-2)/3!. And on top of that each calculation is done iteratively rather than algebraically.

Would anyone even have an idea of how to go about this that could be done algebraically and at lower then a n^2 time complexity?

Even a suggestion of a technique would suit me to have a try at, because right now I've been working at it for nearly 3 weeks and really am no closer to a decent answer.

Thank you in advance for any help,

Essentially you want to compute the Voronoi diagram of the ellipses. Then the solution you seek is provided by a circle centered on some vertex of the diagram. The work by Karavelas and Yvinec seems the most advanced on this problem, considering more general convex objects, permitted to intersect. They detail an incremental algorithm (add one object at a time to a growing diagram) that requires only $O(\log^2 n)$ time per insertion in your circumstance, and so leads to $O(n \log^2 n)$ time overlall, for $n$ ellipses.

Here is a nice figure from their paper: 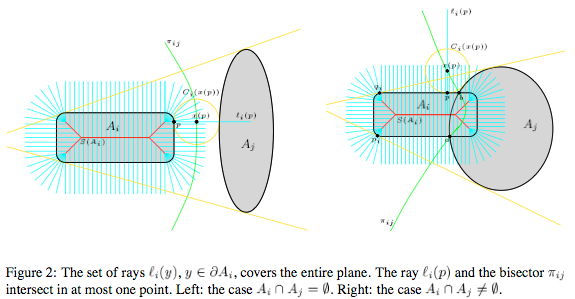 Although implementation of the Karavelas and Yvinec algorithm is not straightforward, it has been accomplished, in CGAL: "A CGAL-based implementation for the Voronoi diagram of ellipses" by Emiris, Hemmer, Tsigaridas, and Tzoumas, 2008 (PDF link): 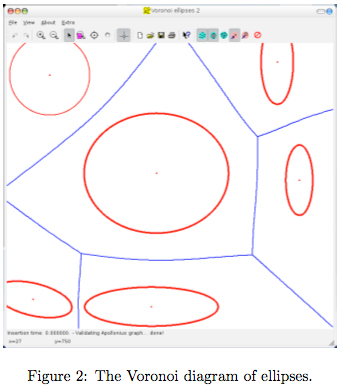 Not the answer you're looking for? Browse other questions tagged ag.algebraic-geometry algorithms oc.optimization-and-control elliptic-curves or ask your own question.

6
Simplex method for SDP?
69
Rigidity of the category of schemes
5
Algorithm for the intersection of a vector subspace with a cone of non-negative vectors
0
Intersecting Degree 0 Divisors
2
Worst-case nearest-neighbor distances between regions
2
Area of an irregular, n-sided, non-intersecting (edges) polygon algorithm
2
Algorithm for Finding all Empty Ellipses Locked by a Set of Points
Question feed