These 'semi' trivial zeros appear to all lie on the critical line. I wonder if anything is known or proven about their location (I guess not, since a proof that they must have real part of $\frac12$ would automatically imply RH, right?).

EDIT: Two counterexamples found by Joro in the answers below. Both have real parts outside the critical strip, so I would like to rephrase my question as:

EDIT 1. To keep up with new developments I now expect that within the critical strip all nonreal solutions of the displayed equation lie on $\Re s=1/2$. Moreover, it seems reasonable to believe that there are no nonreal solutions with $|\Re s|$ sufficiently large.

Slightly off-topic : this article from Arxiv (in french) shows that zeros of functions f : s -> h(s) - h(1-s), where h is a meromorphic function satisfying appropriate growth conditions, are inclined to lie on the critical line, so this phenomenon is not specific to gamma functions.

I didn't check that the main result in the article apply to the function in GH's answer above.

Here is a pari session with big precision:

The starting value was opportunistically chosen from this plot. The colors are explained here 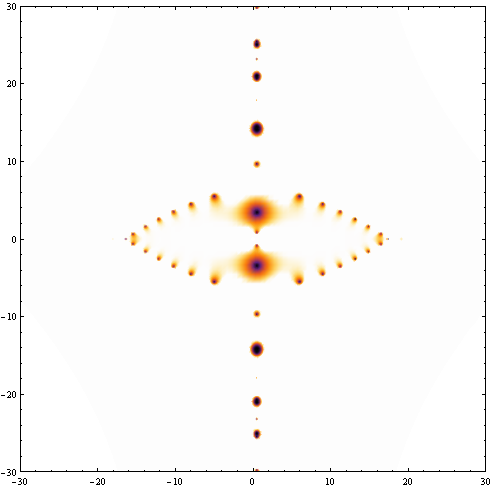 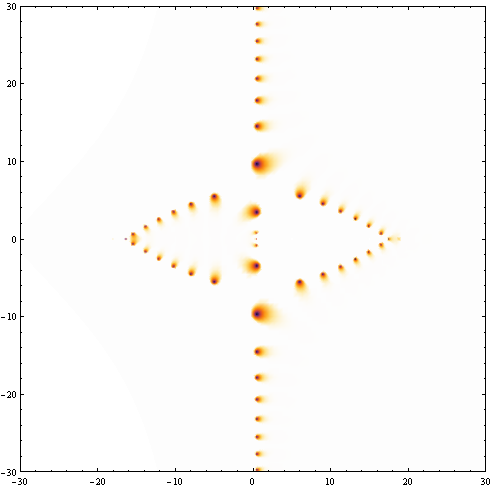 In particular it seems to be the case that all zeroes inside the critical strip are on the critical line, and that all other zeroes don't stray too far from the origin, as hinted at by GH's answer.

We now have strong results from GH for $\Gamma(s) \pm \Gamma(1-s)$ and $\zeta(s) \pm \zeta(1-s)$ (when both are nonzero), as well as a more generalized claim outlined in this article http://arxiv.org/abs/0712.1266, that zeros for $f(s) = h(s) - h(2a-s)$, with $h$ being a meromorphic function satisfying appropriate growth conditions, are all inclined to lie on a critical line $a$, with only a finite number of exceptions.

However, despite the encouraging outcomes that all zeros are on the critical line and only a finite number of exceptions residing outside the critical strip, there doesn't seem to be any way to extrapolate these results to the non trivial zeros ($\rho$). No new constraints seem to be imposed on their location and they really seem to originate "from deep down the unaccessible cave" of $\zeta(s)$ itself. They therefore could still reside anywhere on the critical strip.

Just to share some 'futile attempts' I made to make a link. Firstly I had hoped that somehow the results would force the following outcome for all $\Re s$ in the strip:

and thereby seriously limit the possible values $\Re(\rho)$ could assume. But they don't.

In an attempt to find another relation between $\zeta(s)2$ and $\zeta(1-s)$, I converted both of them to the alternating $\eta(s)$ function and then paired up the individual terms for each $n$ (this is allowed since $\eta(s)$ is valid for $\Re s>0$). This gives:

For each individual $n$, this yields a wave with a fixed frequency and amplitude, that only has zeros when $\Re s=1/2$. These waves nicely sum up to a curve that produces all the 'non & semi' trivial zeros from the OP. However, the $\rho$s obviously do arise from summing up the individual terms as well and I could not find a meaningful way to smartly swap out left and right terms, so that maybe new information about the non trivial zeros would be revealed.

As a last attempt, I also experimented with the PrimeZeta function $P(s)$.

For both functions, all zeros appear to lie on the critical line $\Re s=\frac12$, but for the first function the non-trivial zeros have now turned into poles. Interesting to note that the Wolfram site on the PrimeZeta states: "According to Fröberg (1968), very little is known about the roots", so maybe there is something new here to proof for $P(s) \pm P(1-s)$... :-)