I am wondering if the Erdős-Szekeres empty convex $k$-gon question has a different answer if convexity is replaced by a pseudoline-version of convexity.

The empty convex $k$-gon question is a variant on the Happy Ending Problem. The last remaining case, $k=6$, was settled about four years ago. It is now known that, although there arbitarily large point sets in the plane with no empty convex heptagon, every sufficiently large set contains an empty convex hexagon.

Here is my attempt to generalize this to pseudolines. An arrangement of pseudolines is a collection of curves each pair of which intersects in exactly one point, at which they cross. There are nonstretchable pseudoline arrangements, i.e., those not combinatorially equivalent to any straight-line arrangement. Here's one: 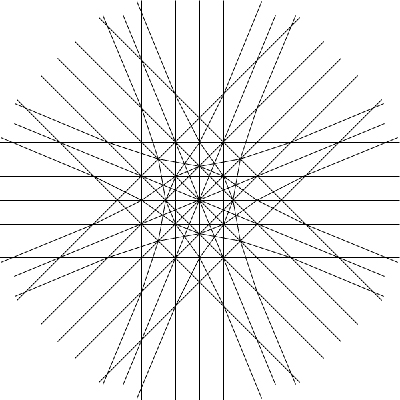 All the above are facts. Caveat: my attempt at defining convexity in this context might not make sense. Given $n$ points in the plane, say that they contain an empty pseudoconvex $k$-gon if

Assuming this definition is not inconsistent, does the Erdős-Szekeres empty convex $k$-gon question have a different answer? For example, perhaps every sufficiently large point set always has a pseudoconvex heptagon?

Aside from this question, I would be interested in learning of convexity definitions analogous to what I tried to define above. Thanks for pointers/ideas!

(Long comment, not an answer to the question posed.)

One way to generalise "general position" configurations of lines in the plane is to assign an orientation "clockwise" or "anticlockwise" to each set of three points and require a small set of axioms to hold. These purely combinatorial objects were called CC systems by Don Knuth in his book "Axioms and Hulls". In the book he proves a correspondence with geometric configurations of pseudolines. There is also a combinatorial definition of "convex polygon" and "interior", so the problem can be stated in a purely combinatorial form. I suggest you check that out as it will probably match your intuition.

Note that the original happy ending problem for 17 points, proved by Peters and Szekeres by computer, also holds for CC systems using much the same computation.

Not the answer you're looking for? Browse other questions tagged discrete-geometry convexity or ask your own question.

82
Light reflecting off Christmas-tree balls
8
Erdos-Szekeres in high dimensions
10
Polygons uniquely inducing arrangements
3
Empty convex polytopes for random point sets
4
What is the probability of an empty convex $k$-gon among many given points?
8
Counting polygons in arrangements
Question feed