I have been recently learning a lot about Macdonald polynomials, which have been shown to have probabilistic interpretations, more precisely the eigenfunctions of certain Markov chains on the symmetric group.

To make this post more educational, I will define these polynomials a bit. Consider the 2-parameter family of Macdonald operators (indexed by powers of the indeterminate $X$) for root system $A_n$, on a symmetric polynomial $f$ with $x = (x_1, \ldots, x_n)$:

(mathoverflow doesn't seem to parse $T_{q,x_i}$ in the formula above, so I had to use the shorter symbol $T_i$, which depends on q).

I like to think of the translation operator as the quantized version of the differential operator $I + \partial_i$, where $q-1$ is analogous to the Planck constant(?).

If we write $D(X;q,t) = \sum_{r=0}^n D_{n-r}(q,t) X^r$, then Macdonald polynomials $p_\lambda(q,t)$ are simply simultaneous eigenfunctions of these operators. When $q=t$ they become Schur polynomials, defined by $s_\lambda = a_{\delta +\lambda} / a_\delta$. When $q= t^\alpha$ and $t \to 1$, we get Jack symmetric polymomials, which are eigenfunctions of a Metropolis random walk on the set of all partitions that converge to the so-called Ewens sampling measure, which assigns probability proportional $\alpha^{\ell(\lambda)} z_\lambda^{-1}$. When $q = 0$, they become the Hall-Littlewood polynomials and when $t=1$ they become the monomial symmetric polynomials etc.

There are plenty of polynomials, and only a few are specializations of Macdonald polynomials. As a polynomial botanist, the following is a very incomplete family tree.

A more comprehensive list of symmetric functions and generalizations can be found here. 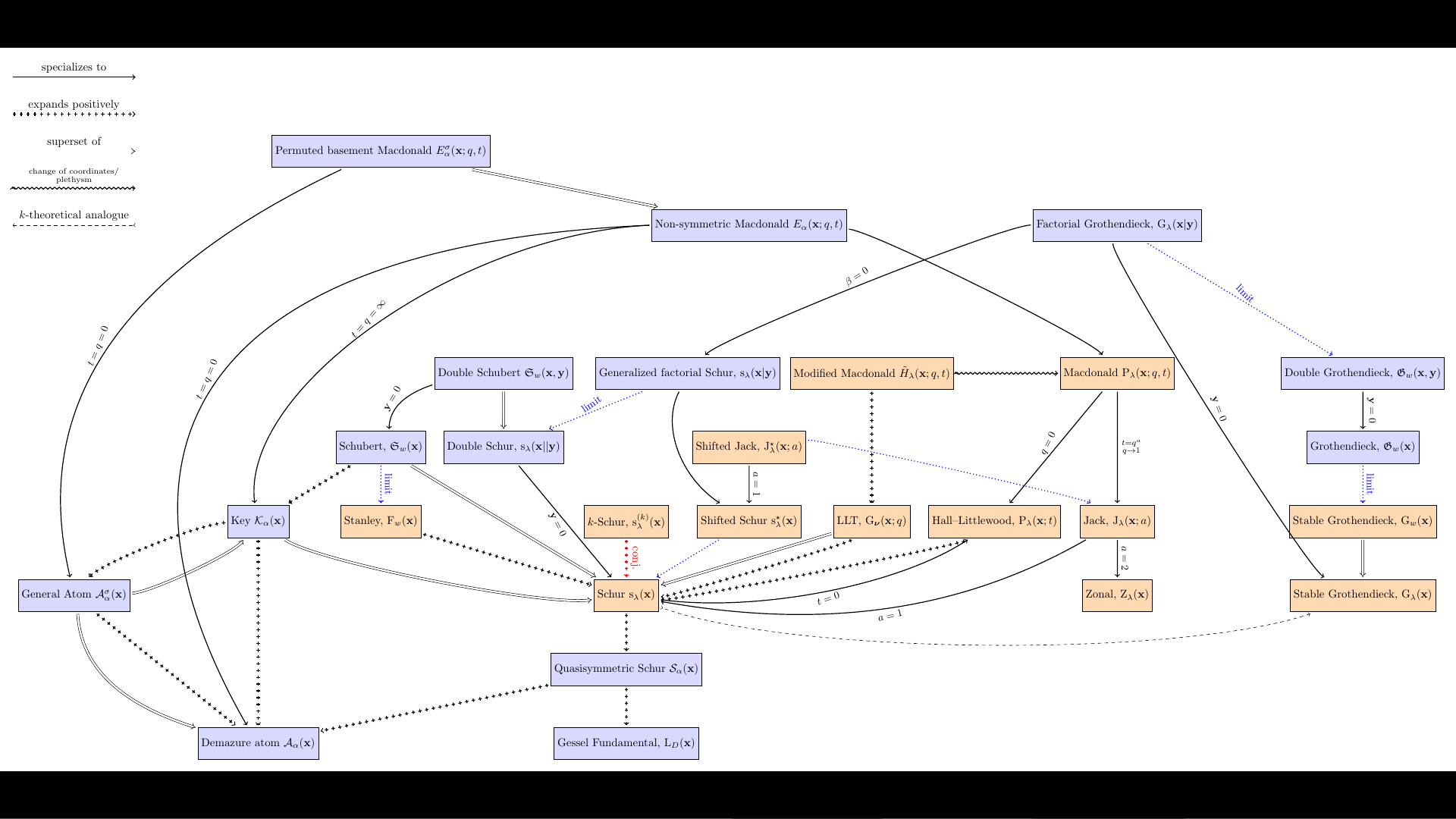 Edit: I added a few more generalizations, but it is getting crowded. Click on the image for a larger version.

I don't know this story too well, but at least for type $A_1$ there is a 5-parameter family of symmetric polynomials called Askey-Wilson polynomials that specialize to the Macdonald polynomials. (I'm not sure about the story for higher ranks or other types.) These polynomials are controlled by the representation theory of a 5-parameter double affine Hecke algebra $H_{q,a,b,c,d}$ (introduced by Sahi, I believe). When all the parameters are 1, this algebra is $\mathbb C[X^{\pm 1},Y^{\pm 1}]\rtimes (\mathbb C\mathbb Z_2)$. (The Macdonald polynomials are controlled by Cherednik's double affine Hecke algebra of type $A_1$, which is isomorphic to $H_{q,t,1,1,1}$.)

Oblomkov showed that $H_{q,a,b,c,d}$ is a universal deformation of $\mathbb C[X^{\pm 1}, Y^{\pm 1}]\rtimes (\mathbb C \mathbb Z_2)$, which in some sense shows that the Askey-Wilson polynomials are the largest family of polynomials which have similar properties to Macdonald polynomials.

Another way of seeing Macdonald polynomials is via the following definition (I now take it from Macdonald's lecture series "Symmetric functions and orthogonal polynomaials", Section 1.11, but you find it in various places, like http://en.wikipedia.org/wiki/Macdonald_polynomials for the definition for any root system of finite type.): The $P_\lambda(q,t)$ are characterized by the two conditions

Using this definition (which actually needs a proof as it overdetermines these polynomials), one can somewhat derive the condition for any family of symmetric functions by saying that they need to be triangular when written in the monomial basis, and that they need to behave appropriately with respect to a specialization of $q$ and $t$ in the inner product in the second condition.

I hope that's somewhat giving you a recipe to check if your family can be obtained from the Macdonalds, but I have no idea how hard it might be to check how that inner product looks like on your family of symmetric polynomials.

There is a result by Sergei Kerov (in his book Asymptotic representation theory of the symmetric group and its applications in analysis) which somewhat charaterizes the Macdonald symmetric functions. Namely, in Chapter 2 he proves the following.

Then essentially the constants $w_1,w_2,...$ correspond to the Macdonald scalar product (or its variants; e.g., $w_n\equiv 1$ is the Schur case, etc.)

So, from this perspective you cannot invent anything else.

Not the answer you're looking for? Browse other questions tagged symmetric-functions symmetric-groups co.combinatorics or ask your own question.