I need to model a process that has large, smooth and mean-reverting long-term fluctuations and some small short term wiggles, a sample path looks like this: 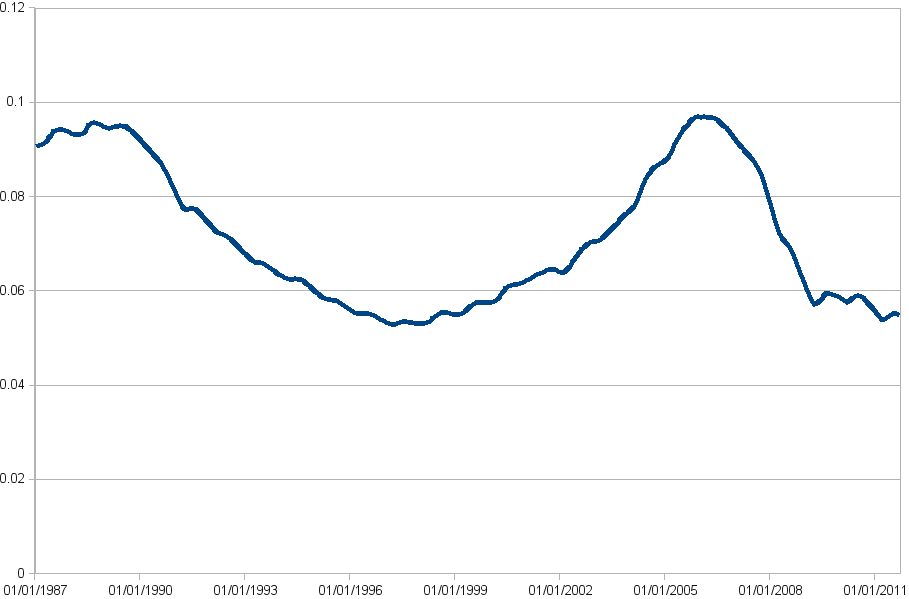 My first idea was to model it as an integral of an Ornstein-Uhlenbeck process (because the graph of the differences of the process look nicely mean-reverting), but this would not capture the long term fluctuations. The mean-reversion level of the differences should somehow incorporate this information, but I don't know how to achieve it. Any ideas which process would be reasonable?

There are two ways this is commonly handled, both still based on O-U:

Let's say your real time series of interest is $Y(t)$. In the first case, often used by econometricians to handle seasonality, one sets up a deterministic process $F(t)$, and then run Ornstein-Uhlenbeck as a variation on that process. That is to say, we define the stochastic variable $X(t)=Y(t)-F(t)$ and then specify $$ dX_t = -\alpha_t X_t + \sigma_t dW $$

The math is all still quite tractable, particularly so with constant $\alpha,\sigma$.

It's worth noting that, with respect to calibration, you can treat the problem as separable to the extent that $\alpha_1 \ll \alpha_2$ is really true.

Not the answer you're looking for? Browse other questions tagged pr.probability stochastic-processes or ask your own question.

1
Extension of some feature of SDE Ornstein-Uhlenbeck type
1
First order approximation of the current in ASEP
4
Do we need Feller condition if the process jumps?
4
How to calculate the PSD of a stochastic process
1
Mixing the Ornstein-Uhlenbeck Process and Geometric Brownian Motion
0
Is there a generalised version of the Donsker invariance principle for a “sort-of continuous-time-random-walk”?
Question feed