I'm not a functional analyst (though I like to pretend that I am from time to time) but I use it and I think it's a great subject. But whenever I read about locally convex topological vector spaces, I often get bamboozled by all the different types that there are. At one point, I made a little summary of the properties of my favourite space (smooth functions from the circle to Euclidean space) and found that it was:

Its dual space (with the strong topology) is

I get the impression that many of these properties (and there are more!) are not "front line" properties but rather are conditions that guarantee that certain Big Theorems (like uniform boundedness, or open mapping theorem) hold. But as an outsider of functional analysis, it's not always clear to me which are "front line" and which are "supporters".

So that's my question: which of these properties (and others that I haven't specified) are main properties and which have more of a supporting role?

I realise that there's a little vagueness there as to exactly where the division lies - but that's part of the point of the question! If pressed, I would refine it to "Which of these properties would you expect to find used outside functional analysis, and which are more part of the internal machine?".

First, there is a great survey of locally convex topological spaces in section 424 of the Encyclopedic Dictionary of Mathematics. (The EDM, if you have not seen it, is a fabulous reference for all kinds of information. Even though we all have Wikipedia, the EDM is still great.) At the end it has a chart of many of these properties of topological vector spaces, indicating dependencies, although not all of them. This chart helped me a lot with your question. On that note, I am not a functional analyst, but I can play one on MO. Maybe a serious functional analyst can give you a better answer. (Or a worse answer? I wonder if to some analysts, everything is the machine.)

Every important topological vector space that I have seen in mathematics (of those that are over $\mathbb{R}$ or $\mathbb{C}$) is at least a Banach space, or an important generalization known as a Frechet space, or is derived from one of the two. We all learn what a Banach space is; a Frechet space is the same thing except with a countable family of seminorms instead of one norm. Many of the properties that you list, for instance metrizable and bornological, hold for all Frechet spaces. In emphasizing Banach and Frechet spaces, the completeness property is implicitly important. Since a normed linear space is a metric space, you might as well take its completion, which makes it Banach. A Frechet space is a generalization of a metric space known as a uniform space and you might as well do the same thing. Also the discussion is not complete without mentioning Hilbert spaces. You can think of a Hilbert space either as a construction of a type of Banach space, or a Banach space that satisfies the parallelogram law; of course it's important.

Of the properties that do not hold for all Frechet spaces, I can think of four that actually matter: reflexive, nuclear, separable, and unconditional. In addition, a Schwartz space isn't really a space with a property but a specific (and useful) construction of a Frechet space. (Edit: It seems that "Schwartz" means two things, the Schwartz space of rapidly decreasing smooth functions, and the Schwartz property of a locally convex space.)

A discussion of the properties that I think are worth knowing, and why:

Prompted by Andrew's question, I compiled some data on relationships between types of locally convex topological spaces. In particular, I made a Hasse diagram (drawn with Graphviz) of properties included below. It began as a simplification of the one in EDM, but then I added more conditions. The rule for the Hasse diagram is that I only allow "single-name" properties, not things like Frechet and nuclear, although adverbs are allowed. The graph makes the topic of locally convex spaces look laughably complicated, but that's a little unfair. You could argue that there are more than enough defined properties in the field, but of course mathematicians are always entitled to make new questions. Moreover, if you look carefully, relatively few properties toward the top of the diagram imply most of the others, which is part of the point of my answer. If a topological vector space is Banach or even Frechet, then it automatically has a dozen other listed properties.

I have the feeling that the Hasse diagram has missing edges even for the nodes listed. If someone wants to add comments about that, that would be great. (Or it could make a future MO question.) The harder question is combinations of properties. I envision a computer-assisted survey to compare all possible combinations of important properties, together with citations to counterexamples and open status as appropriate. I started a similar computer-assisted survey of complexity classes a few years ago. 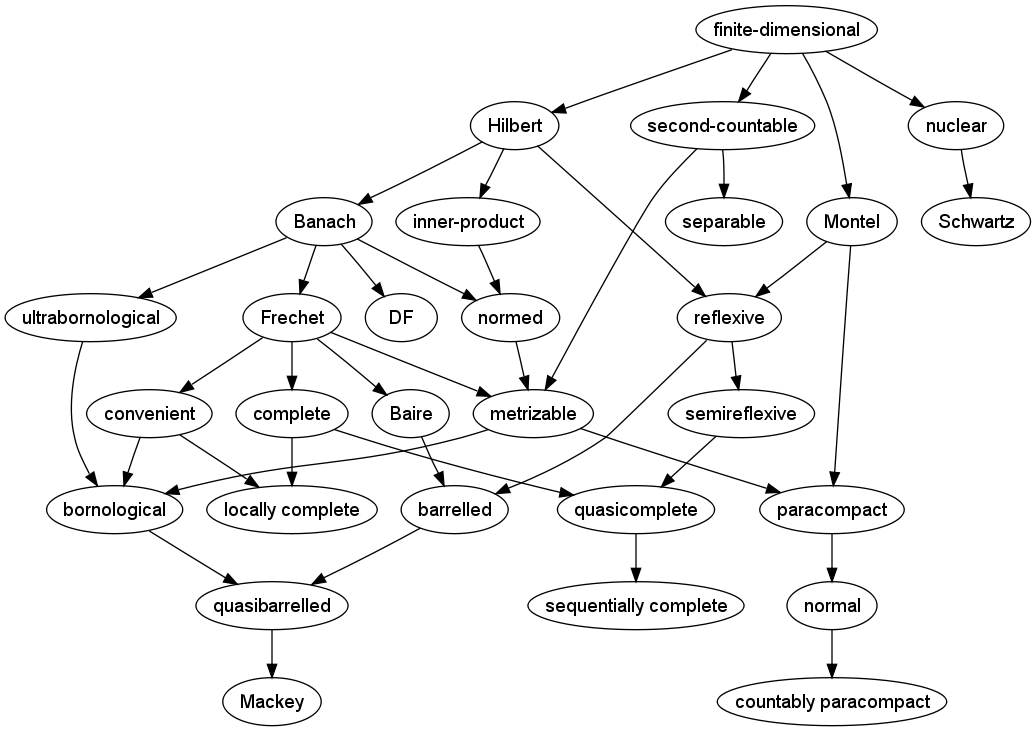 Apology of one maker of a slight mess:

In fact, the space of smooth curves in a lcs (= locally convex space) does not change if you change the topology, as long as the bornology stays the same. In fact you can start from a dual pair of spaces $(E, E')$ (separating points on each other), check, whether Mackey Cauchy sequences for the weak topology converge (then $E$ is convenient), and then you can choose any lcs topology which is compatible with the duality. The finest such topology is bornological. This was part of the approach in the book of Froelicher and Kriegl, who started from scratch and reconstructed everything.

The most natural topology on $E$ from the point of view of Calculus is the final topology with respect to all smooth curves (equiv: all Mackey convergent sequences, equiv: all locally Lipschitz curves, ...); this is denoted $c^\infty E$. The finest lcs topology coarser than $c^\infty E$ is the bornologification of any lcs toplogy which is compatible with dual pair.

Or you can try to allow users to make use of knowledge in the theory of lcs. This was the approach in the book: Convenient setting ... There you are allowed to use any lcs topology on $E$ that you know well or can describe well and which still has the given bornology. Spaces $E$ are identified if they are biboundedly linearly isomorphic (equiv.: diffeomorphic). To be convenient is a property of such equivalence classes of spaces.

[Added in edit:] Or, to be convienient is a property shared by all spaces in such an equivalence class (or a space with all lcs topologies with the same system of bounded sets). The relation to the Frölicher-Kriegl notion is: take the bornologification of the space in question, as in their book only bornological spaces are considered.

So, in Greg's nice diagram above, the place of convenient should be: Sequentially complete $\implies$ convenient.

In fact, each "naturally described" lcs is convenient. You have to force it to be not convenient by choosing a not Mackey complete subspace with the induced lcs topology.

168
Proposals for polymath projects
2
Is a Fréchet Montel space distinguished?