Is there a mathematical theory that explains the shape of a snowflake? Why is it not round?

Update Tree-like metric spaces appear often as limits of sequences of metric spaces (say, asymptotic cones or boundaries of metric spaces). I wonder if similar objects can be obtained as shapes minimizing some kind of energy functional. This may lead to new constructions in geometric group theory.

I just saw Igor Rivin's answer which may be what is needed. Perhaps somebody can give a more detailed answer?

Yes, there is a quite active theory of crystal formation, in which the late Fred Almgren and the very much with us Jean Taylor did groundbreaking work. If you google "ALmgren Taylor dendrites" you will be enlightened. You can read the papers (and papers referring to the papers) -- I think the theory is not so simple.

Janko Gravner at UC Davis and David Griffeath at the University of Wisconsin-Madison have modeled snowflake growth, as reported on this web page:

the researchers were able to recreate a wide range of natural snowflake shapes. Rather than trying to model every water molecule, it divides the space into three-dimensional chunks one micrometer across. The program takes about 24 hours to produce one "snowfake" on a modern desktop computer.

Paper, code, and movies on this modeling are available here. Here is a 1min17sec YouTube video of growth simulations following this model; and here is a 26sec, more colorful set of simulations.

Added. Some added detail from the G-G papers:

A more physically based, 3D model is explored in the paper "Monte Carlo Simulation of the Formation of Snowflakes," by Maruyman and Fujiyoshi Journal of the Atmospheric Sciences, 2005. Comparisons of the shape to "observed snowflakes" are made:

I was curious about the OP's second question, which I now think is actually rather difficult. Namely

Why is it [the shape of a snowflake] not round?

Various physics-y sources (e.g. this paper) suggest the following "explanation" for the shape of a snowflake, which I mention in my comment on the original question--namely, that water crystallizes in a hexagonal lattice, so small snowflakes are just hexagons; new water molecules are more likely to attach at corners than edges or faces (for complicated reasons I don't really understand) so vertices grow faster than edges. Thus the hexagon will become a non-convex 6-pointed star; then the edges of this figure will split similarly, and so on. This interpretation is born out by e.g. the picture on pg. 884 of the paper above.

This inspired the following simple model, which comes in both deterministic and random flavors. We'll build a snowflake on the standard hexagonal lattice in $\mathbb{R}^2$, spanned by e.g. $(1, 0)$ and $(1/2, \sqrt{3}/2)$. Start with a single regular hexagon of side length $1$ centered at the origin, with vertices the six shortest lattice vectors.

I had some time this morning, so I coded up both models in the language "Processing." Here is a typical pair of snowflakes from the deterministic model: 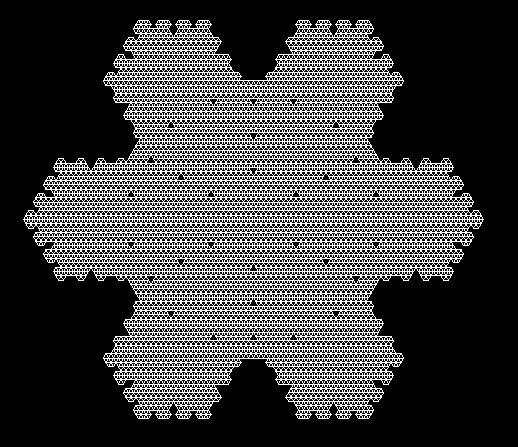 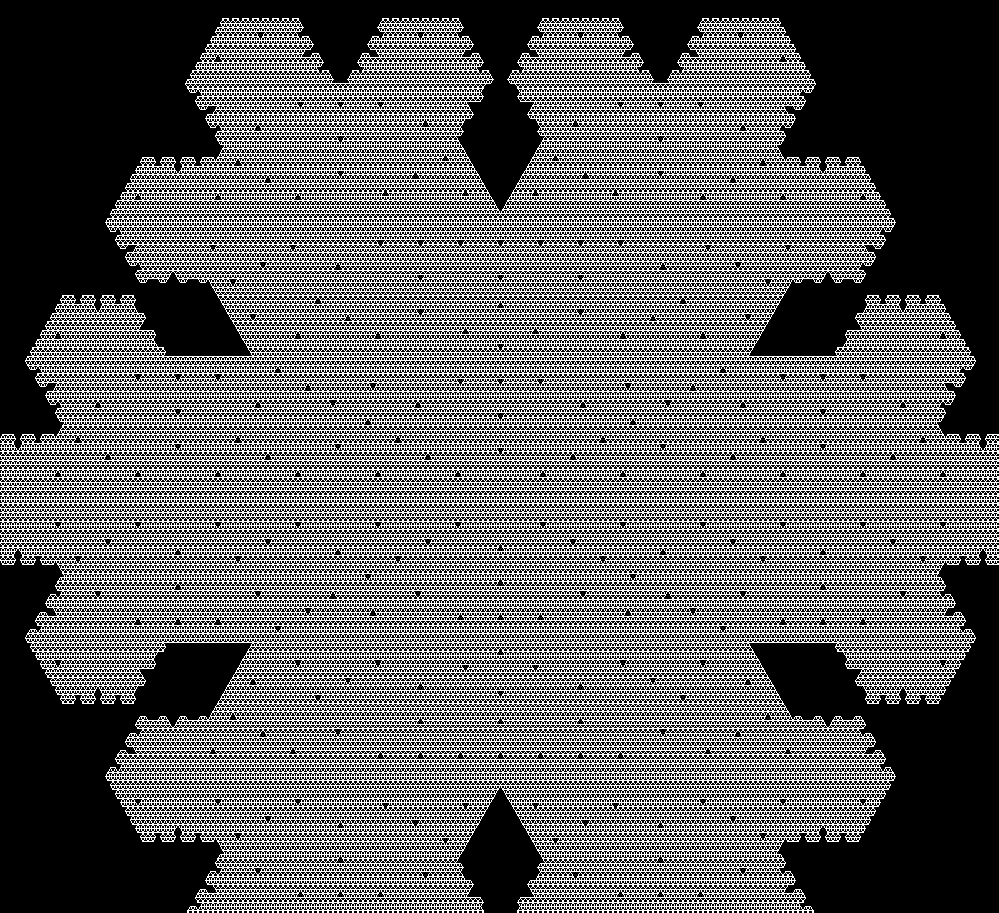 This model has the following interesting properties, none of which are particularly difficult to prove.

1) By the envelope of a snowflake I mean the smallest simply-connected polygon containing it. Let $S_n$ be the envelope of the snowflake at time $n$. Consider the sequence $S_n$ in the space of plane polygons metrized by Hausdorff distance, modulo homothety (two polygons are homothetic if one is congruent to a rescaling of the other). Then $S_n$ is recurrent (that is, any homothety class visited by $S_n$ is approached arbitrarily closely infinitely many times). However, the only homothety class taken infinitely many times by the $S_n$ is that of a regular hexagon. (Thus in this setting the adage that no two snowflakes are alike is pretty far off.)

3) Certain interior triangles are never filled in, and as is visible in the pictures above these follow a beautiful regular pattern which I haven't bothered to work out. 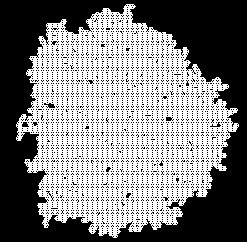 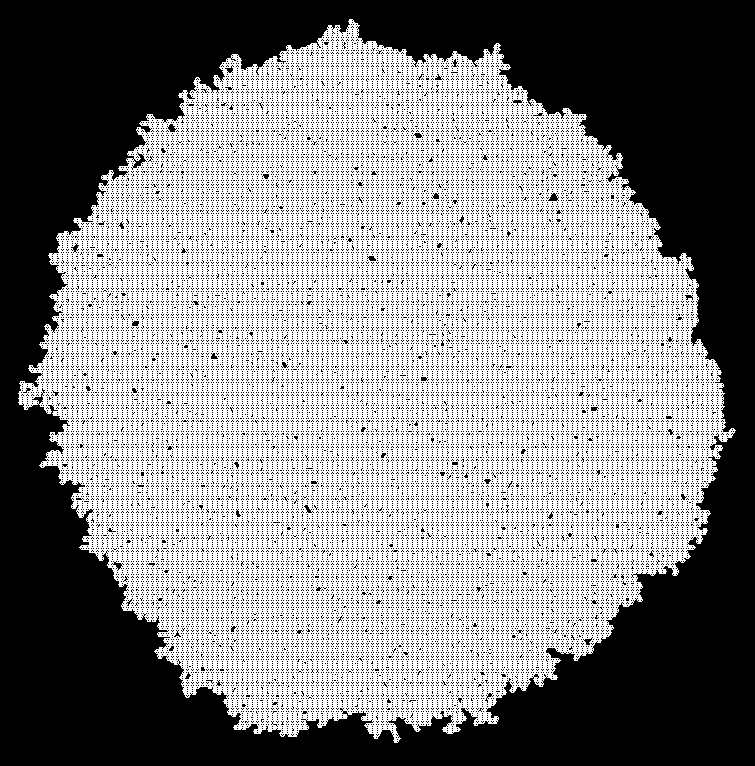 As you can see, these are quite round, so they might be better called snowballs. I understand this model much less well than the deterministic one above. However, the following conjectures are natural given the pictures.

4) (Conjecture) In the space of homothety classes of plane polygons, metrized by Hausdorff distance, as in (1) above, the envelopes of these shapes tend towards the homothety class of a circle with probability $1$.

In other words--the random model I implicitly suggested in my comment on the original question seems to give round snowflakes! So I at least think the physics question as to why snowflakes aren't round is still pretty interesting.

In the comments, Rebecca Bellovin suggests another random model--namely, fix a probability $0\leq p\leq 1$ and at each time $t$, and each valid lattice point (namely, each lattice point which is the vertex of exactly one hexagon) add a hexagon centered at that point with probability $p$. At least for small $t$ (e.g. $t<10000$), this seems to interpolate between the two models I give here, and certainly if one scales $p$ in proportion to the number of valid lattice points (so that for example the probability is negligible that more than one hexagon will be added, or that no valid points will be missed), these models will behave exactly like the ones I give. On the other hand, for middling $p$, something interesting happens--namely, the snowflakes look like rounded hexagons. At Rebecca's request, I am posting a picture for $p=0.7$, below: 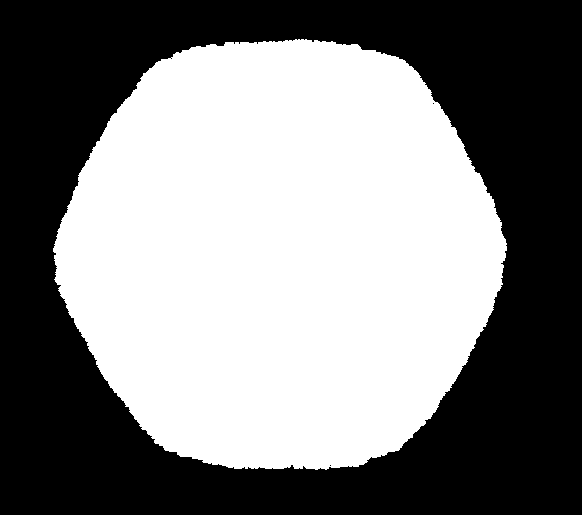 I have no real explanation for this phenomenon; only unconvincing heuristics.