I'm collecting advanced exercises in geometry. Ideally, each exercise should be solved by one trick and this trick should be useful elsewhere (say it gives an essential idea in some theory).

Given $n$ balls in $\mathbb{R}^d$ with radii $r_1,r_2,\dots,r_n$. Assume that this system of balls can not be separated by a hyperplane (that is, if a hyperplane $H$ does not intersect these balls, they necessarily belong to the same half-space bounded by $H$). Prove that all $n$ balls may be covered by a ball of radius $\sum r_i$.

Here's a cute question which Frederic Bourgeois asked me on a train journey recently. He was asked it by Givental, if my memory serves correctly, but I've no idea where it came from originally. Anyway, the question:

There is a mountain of frictionless ice in the shape of a perfect cone with a circular base. A cowboy is at the bottom and he wants to climb the mountain. So, he throws up his lasso which slips neatly over the top of the cone, he pulls it tight and starts to climb. If the mountain is very steep, with a narrow angle at the top, there is no problem; the lasso grips tight and up he goes. On the other hand if the mountain is very flat, with a very shallow angle at the top, the lasso slips off as soon as the cowboy pulls on it. The question is: what is the critical angle at which the cowboy can no longer climb the ice-mountain?

To solve it, you should think like a geometer and not an engineer. (And yes, it needs just one trick which is certainly applicable elsewhere.)

P.S. When I was asked the question, I failed miserably!

Here is a problem that I learned from W. Thurston. I do not remember whose problem it was originally. Possibly Conway?

Suppose that you have a finite collection of round circles in round $S^3$, not necessarily all of the same radius, such that each pair is linked exactly once. (In particular, no two intersect.) Prove that there is an isotopy in the space of such collections of circles so that afterwards, they are all great circles.

Suppose that we have two simple closed curves in $R^3$ which are linked. And suppose that the distance between these curves is $1$. Prove that the length of each curve is at least $2\pi$.

This problem has an interesting history. It was published in the book by W. Hayman, Research problems in Function theory, where it was attributed to F. Gehring. I solved it in 1977, jointly with Oleg Vinkovski, prepared a paper and gave a seminar talk. After the talk, I was approached by an undergraduate student, who proposed a ridiculously simple solution. Just two lines, using nothing. So I did not submit my paper. Later I've seen several published solutions, but none of them was so simple.

EDIT2. Exactly the same proof is published in the paper Criticality for the Gehring link problem, Geometry & Topology 10 (2006) 2055–2115, where it is credited to Marvin Ortel.

EDIT3. Our original solution with Vinkovski also has been rediscovered since then. It can be seen in this file: http://www.math.purdue.edu/~eremenko/dvi/gehring.pdf Thanks to Anton Petrunin for finding this file on my computer:-)

EDIT 4. Recently published updated version of Hayman's problem list, W. Hayman and E. Lingham, Research problems in Function theory, Springer 2019, says that the article by R. Osserman, The isoperimetric inequality, Bull AMS 84 (1978), contains on p. 1226 a survey of published solutions of this problem. It does not contain a solution as simple as Syutrik's solution.

Show that for a simple plane polygon with n sides, floor function (n/3) vertex guards are sometimes necessary and always sufficient to "see" all of the interior points of the polygon.

Anton asks for more problems in topology and algebraic geometry. One issue is that the concept of a "trick" is treated differently in these two areas than in differential geometry. In topology, not quite as many ideas are called "tricks"; they are sometimes named after people and co-opted as material, e.g., the Alexander trick and the Whitney trick. In algebraic geometry, tricks are sometimes regarded as suspect; they are sometimes taken as a reason to reorganize definitions to either again co-opt the trick or avoid it outright.

Still, a problem based on the Alexander trick could be at a good level for this problem list.

Problem: Prove that space of tame knots, meaning piecewise-linear embeddings $f:S^1 \to \mathbb{R}^3$, is connected in the $C^0$ topology on functions $f$.

Since Gjergji brings up isoperimetric inequalities, there is a lot of attention in combinatorial geometry devoted to combinatorial versions. For instance, if $f$ is a Boolean function $f$ on $n$ bits, define its "instability" to be the number of ways that $f(\vec{x}) \ne f(\vec{y})$ when $\vec{x}$ and $\vec{y}$ differ in one bit. If half of the values of $f$ are 0 and half are 1, then the theorem is that the most stable choice of $f$ is a function $f(\vec{x}) = x_k$ that only depends on one bit.

On the theme of one-step proofs in geometry that depend on another theorem, there is a one-step proof of this fact using the standard spherical isoperimetric inequality.

I believe this is a problem given in J. Hirsch's Differential Topology. This may be much simpler than the ones posted here already. But for what it's worth, here it is.

Show that given a collection of spheres the product manifold embeds into an Euclidean space of one dimension higher, viz., for instance $S^2 \times S^3$ embeds in $\mathbb{R}^6$.

I like the following problem. It has a very short solution based on a (very) useful trick (idea).

Measure concentration for the sphere $S^n$, is a nice problem if the use of a theorem (Brun-Minkowski inequality) counts as a trick.

On a similar line stands the "Classical Isoperimetric Inequality". (Among all bodies of the same volume, the ball has the least surface area.)

Another fact that comes to mind (with the trick being a compactness argument) is Bunt-Motzkin theorem:

Problem: Show that a simple polytope $P\subset \mathbb{R}^n$ is convex iff for every point $p$ not in $P$, there exists a unique point in $P$ that's closest to $p$.

Since you asked for a problem in algebraic geometry, here is a popular result whose proof in modern terms is very short. It could be called a one-step problem:

Problem: Consider two closed smooth strictly convex planar curves, one inside another. Show that there is a chord of the outer curve, which is tangent to the inner curve and divided by the point of tangency into equal parts.

Every planar closed curve contains all four vertices of a rectangle (here is an entertaining video with a solution due to Vaughan: https://www.youtube.com/watch?v=AmgkSdhK4K8).

I think this is a cool problem, because you can spend some time trying to craft your own "fractal cover"; after a while you will get the feeling that a tiny bit of the space will always get left but in a mysterious way.

A friend of mine solved this with measure theoretic ideas, but it can be done in a tricky way using homotopy colimits, which are definitely useful in algebraic topology.

Greg Kuperberg's comment on Alexander tricks reminded me of a nice one due to Tom Goodwillie.

Similarly, there's a nice one-line proof that the inclusion map $K_n \to K_{n+1}$ is null-homotopic. The original idea is ancient but this formulation (as far as I know) is due to me. You don't need any theorems for this, it's a construction for which you can write down the null-homotopy using simple functions.

I think the question Is it possible to capture a sphere in a knot? is an excellent one-step problem.

All side facets of a convex pyramid fall onto its base facet. Prove that the fallen faces cover the base.

This was proposed by Igor Pak (link with spoilers) to All-Russian olympiad in 2012 (in dimension 3).

Solutions. Take the unit sphere of the same center as the disc. Let $\pi$ be the orthogonal projection on the plane containing the disc. Taking $\pi^{-1}$ of a strip (assuming not too much of it is "outside") we get a "ring" on the sphere. The point is that the area of that ring depends only on its width which is $n^{-1}$ and not on its position. This is the Archimedes Hat-Box Theorem. Since we cover sphere by sets of equal areas, they cannot overlap and the problem follows. $\Box$

Of course, this solution is too short, only an idea.

Given $n$ points on the sphere of area 1, show that there exists an open spherical disk of area $1/n$ which does not contain any of these points.

This is not really an advanced problem and only indirectly related to geometry, but I instantly though of it because of its short solution and trick, which is really nice for the introduction to complex numbers.

Every finite point set has Delaunay triangulation (circumsphere of any simplex doesn't contain points from this set).

I believe this is somewhere in Hirsch's book on differential topology, but I am not sure. The question is:

When is $S^m \times S^n$ parallelizable?

If, however, at least one of $m,n$ is odd then one can use that spheres have stably trivial tangent bundles and 'borrow' a line bundle from the other sphere...

Question: What is the supremum of $P(g)$?

How many lines meet 4 general lines in space?

Solution is to point out that lines meeting three general lines in space form a hyperboloid = quadric.

The fourth line then meets the quadric in two points.

This is admittedly not very hard even without getting the trick, but it's super-easy with the trick. Hopefully it isn't too easy to be interesting (or even amusing):

We should probably take as given that the determinant of a square matrix is the signed volume of the parallelepiped determined by its columns (or by its rows); I would consider justifying that to be a separate problem (for which I don't know any simple tricks).

(1) Prove: Every simple polygon may be triangulated (partitioned into triangles) via diagonals, vertex-to-vertex segments that are strictly interior (except at their endpoints). [This is a precursor to Joe Malkevitch's post.]

(2) Can every polyhedron be partitioned into tetrahedra via diagonals? 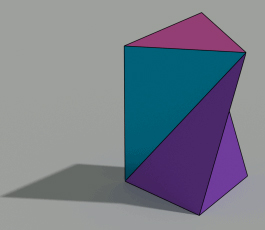 This may not be suitable for several reasons. But anyway, I like Exercise 4.18.3 from A. Beauvilles "Complex Algebraic Surfaces".

The idea of the solution is definitely used elsewhere in algebraic geometry but outside of it maybe not.

Not the answer you're looking for? Browse other questions tagged dg.differential-geometry mg.metric-geometry big-list mathematics-education or ask your own question.

94
Is it possible to capture a sphere in a knot?
77
Does this property characterize straight lines in the plane?
13
Which convex bodies can be captured in a knot?

134
Solutions to the Continuum Hypothesis
212
Proofs that require fundamentally new ways of thinking
11
Floating polyhedra with fair equilibria
54
Open problems in Euclidean geometry?
8
Computational methods for dealing with geometrically complicated solid boundaries in fluid-air interface problems
71
What are some examples of ingenious, unexpected constructions?
106
Analogues of P vs. NP in the history of mathematics
33
Historical (personal) examples of teaching-based research
167
Proposals for polymath projects
53
What definitions were crucial to further understanding?
Question feed