Consider three circles of radius $1$ in $\mathbb{R}^3$, linked with each other in the same arrangement as three fibers of the Hopf fibration. Now thicken the circles up into non-overlapping standard round Euclidean solid tori of equal thickness. Allowing the tori to move, there will be some maximum thickness (distance from the core circle to the boundary of the solid torus) before the tori must overlap each other.

I'm interested in the case that the three tori have $3$-fold rotational symmetry, as in the first image here (I think it might be possible to do better with a less symmetrical configuration).

If realised as a physical object this should have the interesting properly that the only way in which the tori can move is rotation along their axes.

I have a numerical approximation to the best arrangement of the tori, given as follows:

Edit: Better estimates: $r=0.4950197, \theta=-0.8560281$. By Ian Agol's answer, $w=0$. Here is another mysterious symmetry in the numerical solution. Set up a coordinate system on the surface of each torus. Each torus is parameterised by $\alpha, \beta\in[-\pi,\pi)$. The parameter $\alpha$ is in the longitude direction, with 0 at the vector $U$ and $V$ nearest in the positive direction. The parameter $\beta$ is in the meridian direction, with 0 at the biggest longitude (i.e. on the outside of the torus), and the direction $U\times V$ closest in the positive direction. With these coordinates, we can plot the points of contact with the other two tori ($\alpha$ on the x-axis, $\beta$ on the y-axis): 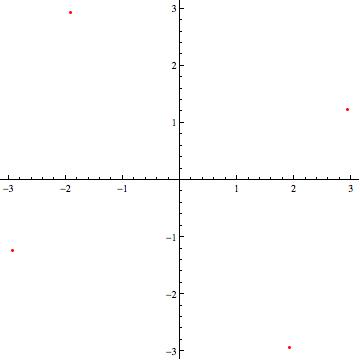 The (numerically approximated) positions of the points are:

I think the minimizer should have dihedral symmetry. I'll give a heuristic explanation for this suggestion.

Consider two linked solid tori of the same shape, such that the outer diameter is less than twice the inner diameter of the hole. If two such tori are tangent at a single point, then one may separate them by a translating each torus in the direction of a vector pointing to one side of the tangent plane at the tangency point.

Now assume that the two linked tori are related by a rotation of order three, rotating one torus to the other. If there is only one tangency point, then one may choose one vector pointing to one side of the tangency plane, which is rotated to the other side of the tangency plane by the rotation. Move each torus by a small translation in the direction of its vector, then by the above observation, they will be separated. A third torus obtained by taking the inverse rotation will also be separated, by symmetry.

You might look at the work of Jason Cantarella, Robert B. Kusner, and John Sullivan, particularly their paper, "On the Minimum Ropelength of Knots and Links" (Inventiones Mathematicae, Vol. 150, 2001). They have methods for constructing thick knots and links, which led to the tight configuration of the Borromean rings adopted by the International Mathematical Union as their logo. Perhaps their optimization methods could be adapted under the additional constraint that the rings must be geometric tori. 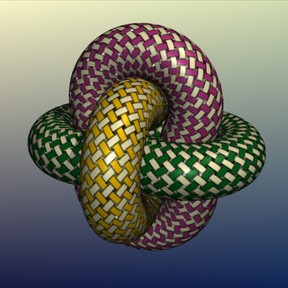 For information on Cantarella's optimization software, see the references in this earlier MO question: "Is it possible to reliably generate a particular approximation of an ideal knot via a simulated annealing approach?"

Not the answer you're looking for? Browse other questions tagged mg.metric-geometry euclidean-geometry or ask your own question.

7
Shortest paths on linked tori
6
cyclic polygons & trigonometry
5
Conditions for when an off-centre ellipsoid fits inside the unit ball
5
Finding an invisible circle by drawing another line
6
Reference request: a differential equation in elementary geometry
4
When does the intersection of cylinders produce a ball?
5
Transport tubes in a sphere
5
A generalization of the law of tangents
Question feed