Eigenvectors and partitions of graphs

Are there any results about this in the literature? Alas I am not very familiar with algebraic graph theory, but all the literature I could find on Laplacian eigenvectors either did not relate the eigenvector to the graph structure (apart from the Perron ev), or only studied graphs that allowed almost equitable partitions.

Are there necessary and sufficient conditions on the graph structure, such that the graph Laplacian does not have eigenvectors of the form $x$ (apart from $\mathbf{1}$)?

final thoughts Let us start with a vector (or just specify the distinct entries) and then try to build a graph. With only 2 distinct entries the partition does need to be almost equitable. I think that it is easy to create high irregularity if some entries are 0. Here is an example cobbled up ad hoc (goals three distinct entries, none being zero. every vertex has neighbors with the other two labels, every label showing two types of vertices): Suppose that the entries are $1$,$2$,$-3$ (how many times each to be determined later). We can ignore edges between vertices with the same label. Suppose $u,v$ are two vertices labeled $1$ , that $u$ has $a$ and $b$ neighbors labeled $2$ and $-3$. Then the eigenvalue is $1(a+b)-2a+3b=-a+4b$ I'll pick $a=1$ and $b=5$ giving eigenvalue $19.$ Then $-c+4d=19$ where $c$ and $d$ are the number of edges from $v$ to vertices labelled $2$ and $-3$ I'll say that some have $c=5$ and $d=6$. Similar calculations and choices lead to this possible situation

Now we have 6 equations in the (positive integer) variables which will need to be satisfied. Counting in two ways edges with ends labelled 1 and -3 gives $5p+6q=13t+8u$ If my calculations are correct then one possible solution is $[p,q,r,s,t,u]=[21m,4m,3m,4m,5m,8m]$ I do not think that there would be any problem (other than tedium) in assigning edges to make that work (say with m=10 or 20). At any rate, the idea is clear.

later thoughts You rephrase your question as (essentially) "what conditions on a graph are necessary for it to have at least one positive eigenvalue (for the Laplacian) with at least one eigenvector with at least one repeated entry?" I don't think that is exactly what you intended but for that question I don't expect a satisfying answer. However many conditions are sufficient.

In your example of $[a,a,-a,-a,0,0,0,0]$ the corresponding graph does have the equitable partition with 6 singleton cells along with $\lbrace6,8\rbrace$ and that partition does support the eigenvector. Every vertex is adjacent to both or neither of $6,8$ so one also has the eigenvector $[0,0,0,0,0,1,0,-1]$ for $3$ (as $6$ and $8$ are not connected and have degree $3$) This means that every eigenvector for other eigenvalues does have equal entries in positions 6 and 8 (as they will be orthogonal to that one).

Given your comments, your question seems to be better put as: What conditions on a partition of the vertices is necessary for it to support an eigenvector for (a positive eigenvalue of) the Laplacian? Perhaps you wish to add the condition that the eigenvector takes distinct values on distinct cells. There i don't know but I still don't expect much.

earlier I am having trouble editing my previous answer so here are later thoughts.

With regard to the Laplacian Matrix:

With regard to the incidence matrix: I think that my argument in the previous answer does show that a partition into $k$ parts is equitable if and only if it supports $k$ linearly independent eigenvectors.

I am going to call the partitions you describe simply equitable (am I missing something?) Here is a graph labelled according to an eigenvector. The red nodes are $+1$ the green are $-1$ and the black are $0$ the corresponding partition is not equitable. The second graph is about the same but seems more clearly a counterexample to your revised question. 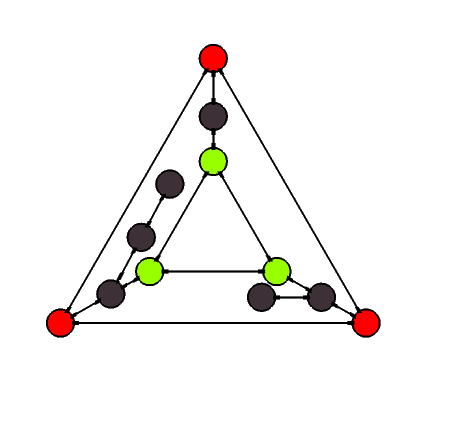 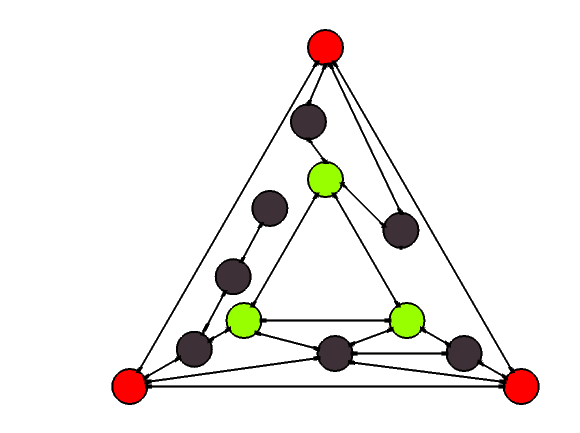 Here is what I think is true: A partition with $k$ parts is equitable iff it supports $k$ linearily independent eigenvectors (for the adjacency matrix $A$ or the Laplacian matrix $L$). Here is a rough sketch of a proof for the case of $A$ (which looks ok to me, but check for yourself) .

Conversely, if $V$ has a basis which are eigenvectors of $A$ then it follows that $AV=V.$