Conjugate vertices in a graph1 or conjugate elements of a group2 are equivalent (indistinguishable, essentially the same) in one specific structural sense.

Isomorphic objects in a category are equivalent in another specific structural sense.

In both cases we don't look inside the objects but declare them equivalent from the outside.

In both cases equivalence has to do with isomorphism: with structure preserving maps between the structure the conjugate elements live in and itself (automorphisms) resp. with iso arrows between the elements themselves.

Define two objects $A,B$ in a category to be conjugate when there is an isomorphism endofunctor $F$ with $F(A) = B$.

Question 1: Is it true that any two isomorphic objects are conjugate (since there is an isomorphism endofunctor that permutes them)?

The reverse is most certainly false: There are categories with conjugate objects that are not isomorphic. E.g. the graphs

in the category of graphs over two fixed vertices (with graph homomorphisms as morphisms) are two such objects (#9 and #6 in the diagram below). Note that there is no morphism at all between these two graphs.

Question 2: Might it be the case that whenever two objects are conjugate-but-not-isomorphic there is no morphism between them? Or is this true only in special categories and/or special cases?

Question 3: How "normal" is it that a category contains conjugate-but-not-isomorphic objects?

Most of all I'd like to know how to think about this bewildering pair of equivalences in general terms.

Here is the complete category of graphs over two fixed vertices and an arrow whenever there is a graph homomorphism. Compositions and identities are omitted. 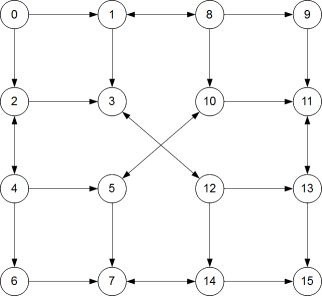 Here's a counterexample to Question 2. Let $\mathbb{Z}$ be the totally ordered set of integers regarded as a category. Then

I suspect that a finite example may be more difficult to construct (or even not exist at all).

I also believe that notions of isomorphism and conjugacy are conceptually quite apart. The first one emphasizes "categories as universes" point of view, where we are interested in properties of objects in a category. On the other hand the notion of conjugacy seems to concern symmetries of the category itself, which emphasizes "categories as structures" point of view.

Question 2 is false for some finite categories. There are two objects $A$ and $B$ that both have an idempotent endomorphism to themselves. There is a morphism from $A$ to $B$ and one from $B$ to $A$, their composition is the idempotent endomorphism. (The best realization I have for this is two finite simple groups, neither being a subgroup of the other, without their automorphisms or with the same automorphism group.)

However, Question 2 is true for finite categories where all endomorphisms are invertible.

Not the answer you're looking for? Browse other questions tagged ct.category-theory graph-theory or ask your own question.

1
Collapsing objects in a category
4
Indistinguishable objects in the category of graphs
6
A weaker concept of graph homomorphism
8
When are the adjacency matrices of non-isomorphic graphs similar?
3
A possible GI isomorphic problem
8
What are “nearly initial” objects really called?
4
When are two kinds of weak equivalence 'the same'?
4
Smallest pair of non-isomorphic graphs equivalent under the Weisfeiler-Leman algorithm
Question feed