Uniformly random dimer tilings of aztec diamond region will have an "artic" circle appear in the middle.

What happens if we make the regions a little bit coarser, do we get the same limit shape?

I apologize for the lousy aspect ratio. In general, does the limit shape depend only on the coutour or does it depend "microscopically" on the boundary conditions as well?

The above only makes full sense in the context of his notes, but he can compute the limit shape in the case below, where it is a cardiod: I believe that the limit shape can be computed for all polygonal approximations of a certain type, those "resembling those in Figure 4."

To expand slightly on Joseph's answer and Noam's comment, you can describe a domino or lozenge tiling by its "height function." In the case of lozenge tilings, shown in Joseph's answer, the height function is visible, since the picture can naturally be interpreted as showing a 3d surface. (You have to make one choice, since there's an ambiguity regarding what is pointing into the screen and what is pointing out.) For domino tilings, it is not nearly as visually apparent, but height functions are explained in a beautiful paper by Thurston (Conway's tiling groups, Amer. Math. Monthly 97 (1990), 757–773).

It turns out that in the continuum limit, the shape of a typical tiling is entirely determined by the shape of the boundary, and it is determined by a variational principle: among all spanning surfaces that satisfy a certain Lipschitz constraint (that must hold for all tilings), the typical surface is singled out by maximizing the entropy, which is given by integrating local contributions that can be computed explicitly in terms of the partial derivatives of the height function. See A variational principle for domino tilings for more details. Almost all tilings will cluster around the typical tiling, so this completely determines the large-scale behavior.

The two examples from the question can be completely analyzed in this framework. In particular, the second one has the highest possible entropy at every point and therefore has nothing like an Arctic circle. See Figure 4 in Local statistics for random domino tilings of the Aztec diamond (reproduced below) for a picture of a random tiling. 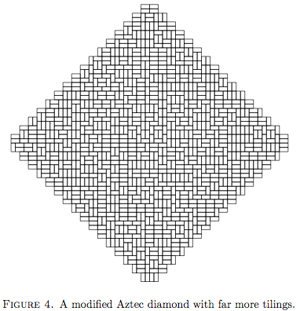 Kenyon, Okounkov, and Sheffield (Dimers and Amoebae) substantially generalized this framework, and Kenyon and Okounkov (Limit shapes and the complex burgers equation) found a beautiful description of the variational problem for lozenge tilings in terms of the complex Burgers equation. This leads to explicit descriptions of cases like the cardioid in Joseph's answer.