Weighted area of a Voronoi cell

Let me answer at least some of your questions. I will only talk about your first definition of the cells, since these are somewhat nicer, as Igor Rivin pointed out.

This behavior is somewhat typical. Let me illustrate it with a bit more interesting example. We give a "random diagram" as suggested by Joseph O'Rourke. I obtained the following pictures with sage.

The white region is the one associated with $w_1$. Here is a plot of the corresponding function $f(w_1)$: 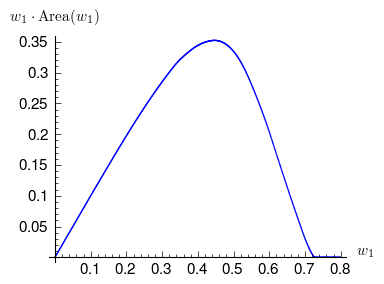 Lets zoom in on the non-concave part: 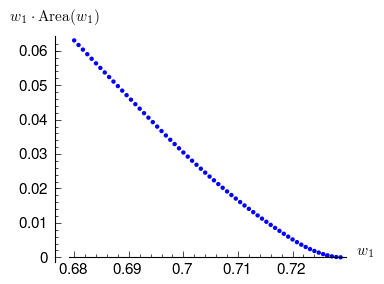 Let us explore the function $\text{Area}(w_1)$ a bit more in general. To find the power diagram we can use the convex hull method (for example described in Jiří Matoušek, Lectures on Discrete Geometry, p. 118 (Ch. 5.7)). Roughly speaking, to each of the given points in $\mathbb{R}^2$ we associate a hyperplane tangent to the paraboloid in $\mathbb{R}^3$ and lift it up and down with the weights to obtain a polyhedron. The projection of this polyhedron on $\mathbb{R}^2$ gives the power diagram. We can intersect this polyhedron with the infinite prism over the unit square to obtain a new polyhedron $P$. Without loss of generality, we assume that the paraboloid is based at the first point with weight $w_1$. Hence the hyperplane associated to this point is parallel to $\mathbb{R}^2\subset\mathbb{R}^3$. Then $\text{Area}(w_1)$ is the area which this hyperplane cuts off the polyhedron $P$. It is somewhat understood how those cuts behave. By Brunn's slice inequality (see for example the same book by Matoušek, Thm 12.2.1, p. 297) we get

This is not an answer, just a way to empirically explore your question. There is publicly available code for computing the weighted Voronoi diagram. For example, this Matlab code (WayBack Machine link) written by Andrew Kwok, which produced the image below (left), or this Java and VB code by Takashi Ohyama, or this applet by Oliver Münch, which produced the image below (right). Using such code, it would not be too difficult to gather data to plot $f(w_1)$ in a random diagram and see if it is unimodal or convex. 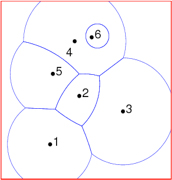 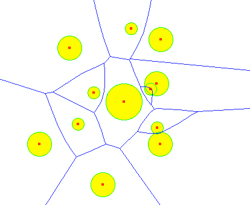 Not the answer you're looking for? Browse other questions tagged mg.metric-geometry discrete-geometry convex-polytopes convexity computational-geometry or ask your own question.

2
Choosing the weights of a Voronoi diagram -- is this function always the gradient of another function?