Imagine I take a sheet of paper and use a pin to generate an $N$x$M$ rectangular array of small holes. I then fold the sheet to form a cylinder of radius $r_c$ and height $h_c$, where there are $N$ pinholes around its circumference and $M$ pinholes from the top of the cylinder to the bottom. No edge-effects from the folding process are discernible.

How do I choose $(p_1, p_2)$ to generate a line containing a coordinate $C*$ as close as possible to my chosen coordinate $C$? In general, how well can I do as a function of the density of the pinhole array and the position of the coordinate in terms of $A$ and $B$? Pressing my luck, in terms of minimizing the (straight-line) difference between $C$ and $C^*$, are there better geometries for the pinholes than a rectangular array?

Update: First of all, thanks to Joseph O'Rourke for the awesome graphic! Secondly, I would be very interested in an analysis of worst-case delta with excluded regions, say, at the top and bottom of the cylinder (as Gerhard Paseman suggested).

This adds nothing to your interesting question, but I couldn't resist illustrating the network of lines ($n=8$, $m=4$): 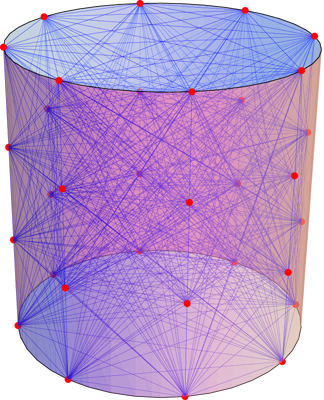 I shall outline an approach to answering some forms of this question, and leave verification and actual computations to others who are more energetic than I feel at present.

The original presentation of points arranged in an n by m rectangular grid makes for a particularly pleasing analysis of the quantity delta, which I define as the maximum over all points p inside the cylinder of d(p) which is the minimum over all lines between two points in the pinhole grid of the distance between p and such a line. Namely, when you project the point and configuration on the horizontal plane to get a point q in or near a regular n-gon, and choose the three or more nearest n-gon diagonals to the projected point, compute d_i which is q's distance for each of these, and then use these choices to look at the projection of p onto each of the vertical planes containing these lines to determine some distances d_j among the grid graphs with their diagonals. delta can then be figured or at least approximated using d_i and d_j, likely delta^2 = minimum of d_i^2 + d_j^2 over an appropriate set of choices for i and j. I expect the d_is for large n to be O(n^(-3/2)) times the radius of the cylinder and the d_js to be at most O(1/m) times the minimum of height and length of the smallest rectangle in the largest of the grid graph projections used, unless one is looking at the top or bottom region, in which case replace 1/m by 1.

For some of the alternate geometries I suggested in a comment, one does not get as nice a decomposition, but they contain one or more copies of the originally suggested geometry, so one can get a rough value of delta using a sub configuration of pinholes, and then refine that estimate by using more pinholes as needed. An O(nm) way of doing that is by picking a pinhole, computing the interesting intersection of the line containing the interior point and the pinhole with the cylinder, and then finding the k closest pinholes to that intersection; doubtless there are refinements to this approach that will allow a speedier estimation of delta.

In fact, this approach (peeking through each pinhole at the point p) suggests that maximal delta will be near the center of the cylinder and will still be a value something like 1/4 the minimum of the height and width of the bounding rectangle (the four pinholes one sees as being "nearest" to the image of the chosen point). The nice thing about this approach is that it can be used on arbitrary pinhole arrangements, and choosing a random selection of pinholes from which to view will often get a quick and good upper bound on d(p) for a given point p.

Not the answer you're looking for? Browse other questions tagged geometry computer-science or ask your own question.

5
What is the smallest diameter ring a non-convex polyhedron can pass through in 3-space?
4
internal language for the 2-category of small categories
3
Are there complexity classes X weaker than the linear time hierarchy such that any r.e. set is a coordinate projection of a set in X?
Question feed