The fundamental groupoid and a pushout in the category of groupoids.

Hi, Recently I've been looking at the more general version of Van Kampen's theorem, or R. Browns version of it, for the fundamental groupoid. It mentions that if a space X is the union of the interiors of $X_1$ and $X_2$ , then: 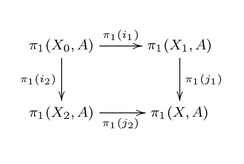 I agree with the comments above: being a pushout is a categorical property. What is useful is to be able to compute explictly such pushouts and, as you say, free/amalgamated products do so in the category of groups.

In SGA 1 (Revêtements étales et groupe fondamental, Exposé IX, §5), Grothendieck had given the same recipe for the fundamental group of schemes. However, his proof is more categorical and based on the correspondence between coverings and sets with action of the fundamental groups, and on descent theory for coverings.

You mention Ronnie Brown, but have you looked up his book on topology and groupoids. I think what you ask for is there. The other very early source for this sort if calculation is in P. J. Higgins little monograph which is a TAC reprint at (http://www.tac.mta.ca/tac/reprints/articles/7/tr7abs.html). There is a lot of stuff in there which you do not find most other places.

Andre Gramain's 1992 exposition of van Kampen's statement is in fact covered explicitly in "Topology and Groupoids", as it was in the 1988 version of that book; it was just an exercise in the 1968 edition.

The point of this type of exposition is to say that sometimes a group can be better explicitly described in terms of groupoids. A basic example is the group $\mathbb Z$ of integers! This is obtained from the groupoid $\mathcal I$ which has two objects 0,1 and exactly one arrow between them by identifying 0 and 1. This is rather analogous to the way the circle is obtained from the unit interval $[0,1]$ by identifying 0 and 1 !

Another aspect is that sometimes a groupoid is a better object to deal with than a group. For example, a homotopy colimit of a diagram of groups is really a groupoid. This is analogous in topology to taking double mapping cylinders rather than a pushout of maps of CW-complexes.

For more information on the book see http://groupoids.org.uk/topgpds.html

I should also say the Higgins' monograph has results on groups, for example a generalisation of Grusko's theorem, that has not been equalled by other methods.

Another aspect of Topology and groupoids is Chapter 11 on "Orbit spaces, orbit groupoids", which allows some computation of the fundamental groupoid and hence group of an orbit space.

I think the relevant formula is 8.4.1 in T&G. This is applied in section 9.2 to the Phragmen-Brouwer property and the Jordan Curve Theorem.

My original motivation for the investigation was to avoid a detour to compute the fundamental group of the circle: a basic theorem should compute THE basic example! I like the view of the integers (an infinite set) as an identification of a groupoid $\mathbf I $ with 4 arrows, identifying 0 and 1.

January 25,2016 There is a small correction to the Phragmen-Brouwer proof.

It may be useful to think about forming the coequaliser of two morphisms $a,b: G \to H$ of groupoids. If $a,b$ are the identity on objects, the formula is just as you would expect: factorise by the normal subgroupoid of $H$ generated by ....If they are not the identity on objects, you first have to coequalise the objects. This gives a function $f: Ob(G) \to Ob(H)$. So you now need Higgins' "Universal morphism" say $U_f : G \to f_*(G)$. The construction of this generalises free groups, free products of groups, free groupoids ... and is well explained in Higgins' book. "Categories and Groupoids" available as a TAC reprint.

Nov 3, 2020 In the NAT book, Appendix B, this is put in the context of the functor $Ob: Gpds \to Sets$ being a bifibration of categories.

38
Explanation for the Thom-Pontryagin construction (and its generalisations)
17
Free symmetric monoidal $(\infty,n)$-categories with duals
26
Concrete example of $\infty$-categories
5
Second homotopy groups of 3-complexes and Fenn's spiders.
13
Generalized Categories for "Higher Homotopy Groupoids"
19
What's the relationship between these two isomorphisms involving G and T?
24
From the perspective of bordism categories, where does the ring structure on Thom spectra come from?
26
Why are we interested in the Fundamental Groupoid of a Space?
6
(Non-trivial) local coefficient system which is not a bundle of groups
9
The integral cohomology of real projective space
Question feed