Recovering a polyhedron from its tumble-density profile

Imagine a white convex polyhedron $P$ tumbling randomly about its fixed center of gravity (c.g.) $c$ against a blue background. A long-exposure photo would show pure white in a neighborhood of $c$ (because an opaque ball about $c$ is interior to $P$), and diminished white and increasing blue in circles of larger radius $r$ about $c$, for a line of sight at a given $r$ only hits $P$ a fraction of the tumbling time. My question is to what extent this tumble-density profile uniquely determines $P$.

Spinning the profile function around $r=0$ shows the density at any point around $c$: 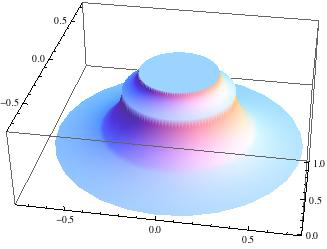 The concave sections of $\rho(r)$ seem to be functions specific enough (sums of inverse trig functions) to perhaps determine the geometry.

Q2. For arbitrary convex polygons $P$, are almost all uniquely determined by their profiles $\rho(r)$?

Certainly there are pairs of incongruent polygons that have the same profile, e.g., this pair of augmented regular octagons:

However, it seems there need be special relationships between these polygons, so that in some appropriate sense, these are density-zero coincidences, and generic polygons have unique profiles.

Q3. Has this notion of density profile been studied before?

My questions are related in spirit to those explored in Richard Gardner's Geometric Tomography (Cambridge University Press, Cambridge, 2nd ed., 2006), but his natural focus on X-rays along lines seems a different flavor than the integration around circles in my profiles. Thanks for ideas and pointers!

(Added) Q2: The answer here is also intuitively yes, but it may be a bit painful to write down a rigorous proof. The following holds:

The proof doesn't use more than just some basic combinatorial geometry and a little analysis. Let's assume that $O$ is the origin. For every convex cone $C$ (the interior of some angle) we can define it's profile $$\chi_C(r)=Vol(B(r)\cap C).$$ If the cone $C$ is so that all rays from $O$ intersect it only once, then $\chi_C$ has only one non-differentiable point, it is constant before that point and real analytic after that. With a little work one can show that if $\chi_C=\chi_{C'}$ on some interval then one can obtain $C'$ from $C$ by a rotation and/or a reflection.

Coming back to our problem by integrating $\rho(r)$ we can write $\chi_P(r)=\int_0^r \rho(x) dx=Vol(B(r)\cap P)$. Now $\chi_P$ can be written as a linear combination of $\chi_C$'s by taking $C$'s to be (1) the outer halfplanes determined by the edges of the polygon and (2) the exterior angles at it's vertices. (Technically there is some case work here, but for the sake of brevity I'm assuming $O$ is so that the perpendicular to each edge of the polygon falls on that edge.)

Since we are working with a generic polygon we can obtain all $\chi_C$'s from $\chi_P$ by looking at the intervals between non-differentiable points and taking the successive differences of their analytic continuation. Therefore we can learn the angles of the polygon, the direction of it's edges and the distances between the edges and $O$. This is enough information to reconstruct $P$ up to a rotation and reflection.

Not the answer you're looking for? Browse other questions tagged reference-request mg.metric-geometry convex-polytopes or ask your own question.