Suppose that for each lattice point in $\mathbb Z^2$ we pick a random direction uniformly and independently. At time $t=0$ we start drawing rays starting from each lattice point in the chosen directions with unit velocity. The drawing of a ray will continue until it intersects another ray, at which point both rays stop.

In the end we are left with a graph $G$ (more like a union of segments, but let's pretend it's a graph), and I would like to understand it's properties.

This seems at first like it might share some properties with percolation in $\mathbb Z^2$, but I'm not so sure. I'd like to know how the connected components are distributed. For example, say we restrict to the lattice points inside the rectangle $[0,n]\times[0,m]$, and perform the process above (with the modification that if a ray hits the boundary rectangle it also stops). What is the expected number of connected components in $G$? (the boundary rectangle is not a part of $G$).

(There used to be a question here about cycles formed, but I removed it since it is more appropriate for motorcycle graphs mentioned in the answer below. For now, I want to focus on connected components. jc's answer seems to indicate that connected components will usually be small.)

A variant of your model has been studied under the name of motorcycle graphs. Jeff Erickson has a very nice description here, from which I took this figure:

The emphasis in the computational geometry community has been: How quickly can the graph be computed, given starting points and initial directions. The interest has not been in the graphs per se (and so not in the properties in which you are interested), but rather their connection to the straight skeleton, a Voronoi-diagram-like construction involving unit-speed propagation of a polygon boundary. You might enjoy exploring David Eppstein's Java applet that permits you to interactively create motorcycle graphs.

At Tom LaGatta's request, here are a few more very rough graphs relating to the number of components. For $n=3,\dots,15$, I ran just 10 instances of each (took about 15-20 minutes). Hopefully that's enough to give a little bit of the idea of the spread.

Here are the total number of components (with size>1) versus $n$. I noticed that it appeared parabolic, so I plotted it on a log-log scale with the function $n^2/3$ (the factor of 1/3 just happened to be close). Each data point corresponds to a different instance. 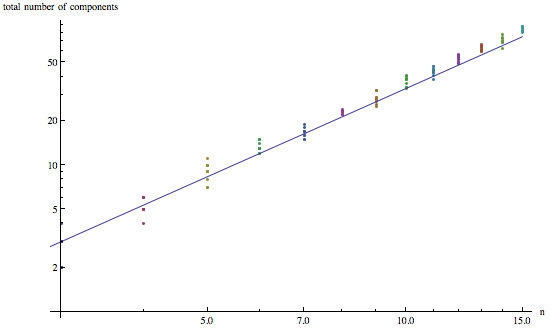 Here on semi-log scales are the distributions of numbers of components (with size>1) for the various grid sizes I considered. The different colors correspond to distributions observed in different instances. They look much better on semi-log as opposed to log-log, though that's fairly meaningless with not even a decade of data and small number effects. 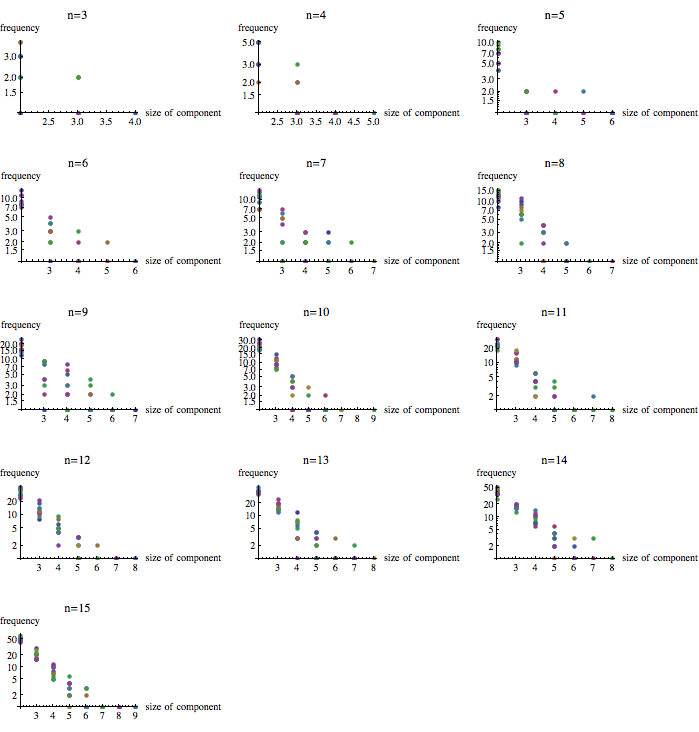 Code for this section (run with the functions in the notebook linked to below):

I wrote a bit of Mathematica code to try to simulate your process (link here). I only partially commented things, so let me know if you have trouble understanding how to use it. More on this after some pictures and graphs.

I apologize in advance, I don't have the time now to do a real systematic study or gather any real statistics on my computer. I'll have to leave it to you or other interested readers...

I didn't bother to add boundary conditions to cut off the rays leaving the grid. Below, components of size 1 are just rays that don't terminate. 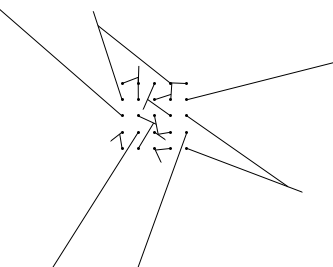 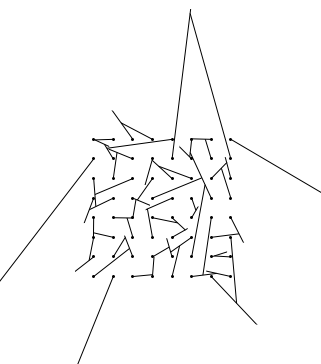 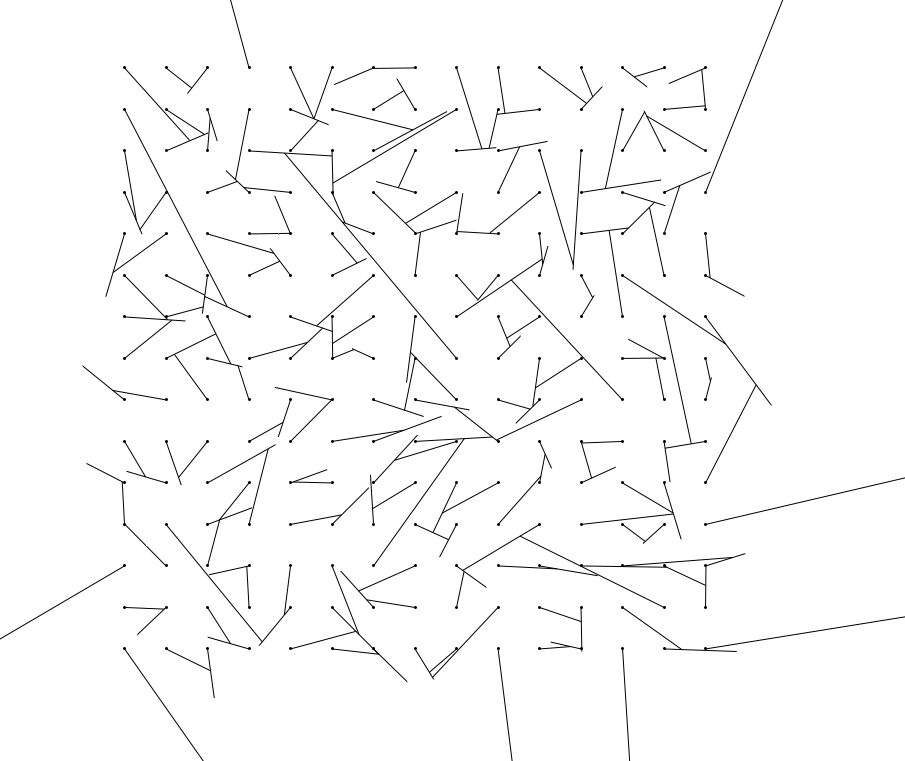 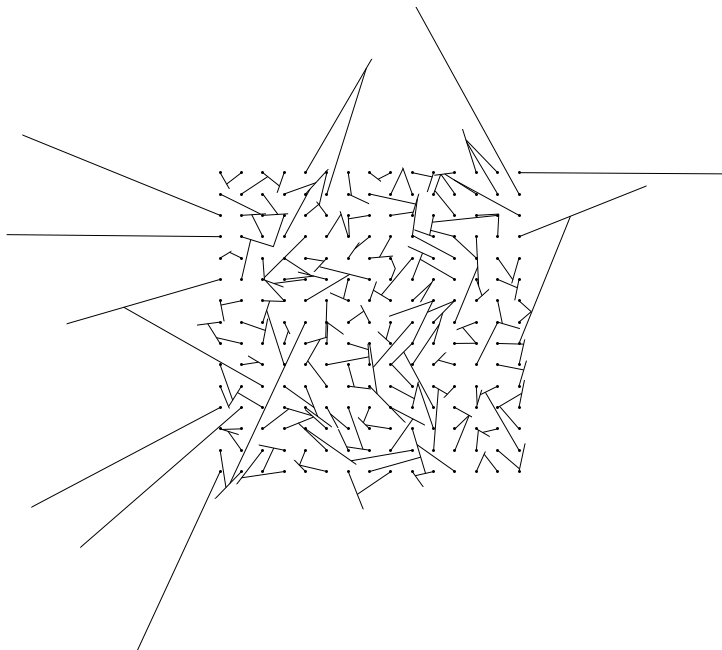 Number of components of a given size for 15x15: 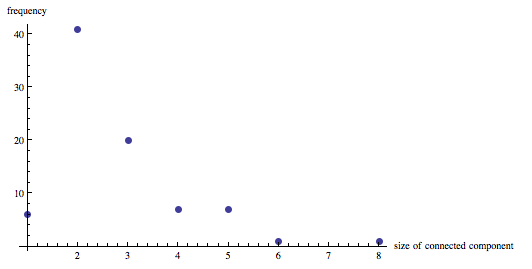 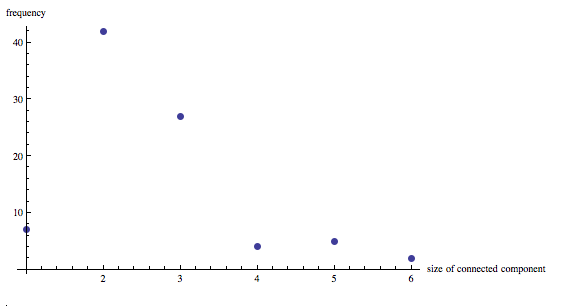 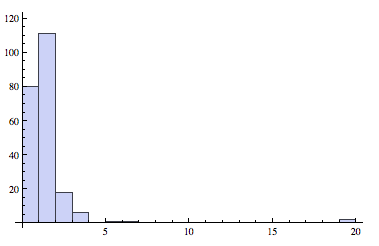 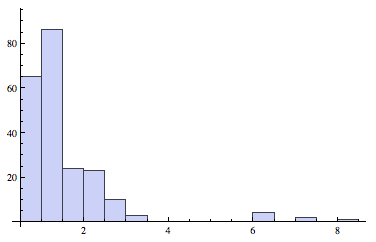 Note: I didn't see any cycles at all, but I had to check this by eye, since I didn't write a routine to extract the graph structure of the connected components. What I have now just records their size.

There is what looks like a cycle in the upper left quadrant of 15x15 #1, but you can easily convince yourself by comparing the lengths of the edges that the rays couldn't actually touch.

I used pretty much the most naïve algorithm I could think of:

What are smarter ways of doing this?

Not the answer you're looking for? Browse other questions tagged graph-theory co.combinatorics pr.probability or ask your own question.

11
Is there a percolation threshold in the hard discs model?
7
Elegant representations of graphs in R^3
10
exactly simulating a random walk from infinity
1
counting edges in tesselations of a torus
3
Probability that a “closable” self-avoiding random walk forms a polygon
6
percolation probability in a hexagonal region
8
Longest induced cycles in random geometric graphs near criticality
Question feed