Closed but not rational points of a real cubic

In Mumford's Red Book of Varieties and Schemes, page 102, he gave the example of the closed but not rational points (that is to say points having residue field the complex field and not the real field) of the cubic $y^2=x^3−x$ on the real field : I have some difficulty to recover by elementary methods the figure he traced.

Especially, he seems to imply that these closed points formed the region $y^2>x^3−x$ in the real plane (which looks like the cylinder he pictured in the projective plane). Can somebody give me a simple explanation ? (I suppose the maximal ideals of the spectrum of the algebra defined by the cubic have to be parametrized the right way ?)

I don't know what Mumford had in mind, but here (in some detail) is a down-to-earth way to topologically identify this space with a cylinder.

the space we're looking for is homeomorphic with the subset, call it $S$, of ${\bf P}^*$ consisting of lines whose real intersection with $C$, with multiplicity, has size $1$

One way to describe $S$ is to start from $p_0 = (x_0,y_0)$. It is geometrically clear that this point must be on the infinite component of $C$, call it $C_0$: the other component $C_1$ is a closed curve in the affine plane ${\bf R}^2$, so any line meets it with even total multiplicity. Given $p_0$, the lines through $p_0$ constitute a real projective line, which is topologically a circle and the lines through $p_0$ that meet $C_0$ in two other points $q,q'$ constitute the union of two closed arcs, one for lines where $q,q' \in C_0$ and the other for lines where $q,q' \in C_1$. [The boundary points correspond to the four points $q$ whose tangent passes through $p$, which are the solutions of $2q=-p$ in the group law of $C$.] So the lines through $p_0$ in $S$ constitute two open intervals. Now the subtlety is that when $p_0$ goes around the closed curve $C_0$, these two intervals switch as each of the boundary points makes a complete cycle around $C_0$ or $C_1$, so we must traverse $C_0$ twice to traverse our cylinder once. In effect we're getting a Möbius band cut down the middle, which is indeed a cylinder (with a "full twist", true, but that is an artifact of the embedding in three-dimensional space that we use to visualize $S$).

to get a picture with two blue components that join up at infinity to form a topological cylinder: 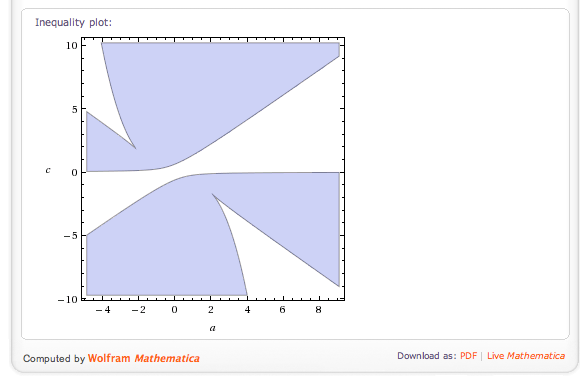 [The two visible cusps come from the inflection points where $p=q=q'$, which are real 3-torsion points on $C$; there's a third such singularity at infinity. This means that of the two boundary components of $S$ (it looks like four but they pair up at infinity) the one containing the cusps is $C_0$, and the other is $C_1$.] Try also

for the picture arising from the curve $y^2=x^3+x$ with only one real component; this time it is a Möbius band embedded in ${\bf P}^*$ so that there boundary and the complement have only one component each: 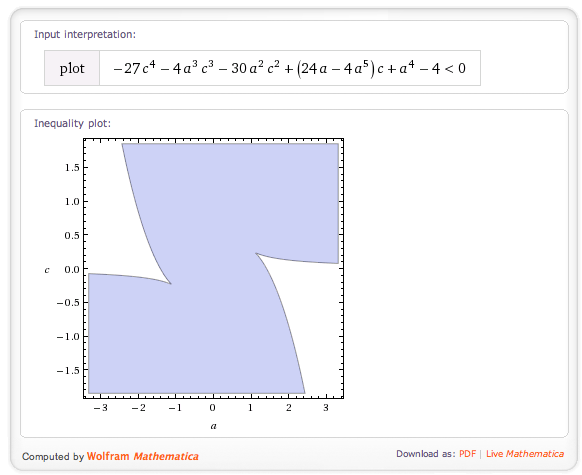 To connect this with the usual (but less elementary) picture of an elliptic curve over ${\bf C}$ as a complex torus: as Lubin noted, the complex locus of $C$ is isomorphic as a Riemann surface with ${\bf C} / L$ where $L$ is the Gaussian lattice ${\bf Z} + {\bf Z} i$; this is consistent with complex conjugation, and the real locus consists of the cosets mod $L$ of the complex numbers of integral or half-integral imaginary part, constituting the components $C_0$ and $C_1$ respectively. We're looking to identify the conjugate pairs $\{(z,\bar z)\} \bmod L$ with a cylinder; in terms of the group law the real point $p_0$ associated above to $\{(z,\bar z)\}$ is $-2 \phantom. {\rm Re}(z)$, which as before can only be on $C_0$ and goes around $C_0$ twice (and in the opposite direction, as it happens) as $z$ goes around the cylinder once.

The edition of Mumford's Red Book that I'm looking at does not support your guess about $S$, in my opinion, even though as a topological space with border, $S$ is exactly right. Perhaps there's a transcendental argument justifying your insight, using the $\wp$-function for the appropriate lattice.

Not the answer you're looking for? Browse other questions tagged ag.algebraic-geometry algebraic-curves or ask your own question.

17
Closed vs Rational Points on Schemes
13
Replacing Spectrum with Valuations of a Field - An Alternative to Schemes?
125
What are the shapes of rational functions?
0
Intersection of an affine cubic and quartic: at least nine points?
1
Rational, but not log canonical singularity
2
Closed points of a closed subscheme of $\mathbb{P}^n$ over the residue field and the fraction field of a valuation ring $R$
Question feed