How many curves can fit on a sphere without intersecting?

(This is more or less a generalized and more abstract version of this m.SE question.)

In my m.SE question, the unique properties of the loxodrome and the existence of the Mercator projection allowed the determination of when $n$ loxodromes can be placed on a sphere without intersecting. I am now considering the following question:

What conditions should the curvature and torsion of a spherical curve satisfy so that $n$ copies of it can be placed on a sphere without intersecting?

Alternatively, any spherical curve can also be defined as parametric equations of the longitude $\theta=\theta(t)$ and co-latitude $\varphi=\varphi(t)$, or in Cartesian form (for a unit sphere):

so we can also ask

What conditions should $\theta(t)$ and $\varphi(t)$ satisfy so that $n$ copies of it can be placed on a sphere without intersecting?

If there are better ways to characterize the conditions than these, I'd be interested in hearing about them.

For convenience, let's consider only the unit sphere.

One theorem(?) I have along these lines is

If a spherical curve fits within a hemisphere without touching a great circle, then two copies of the curve can be fit on the sphere without intersecting.

but I haven't figured out how to generalize this.

"If a spherical curve fits within a circle (or "cap") of radial diameter $D$, then $N$ copies of the curve can be fit on the sphere without intersecting. Where $N$ is defined as below"

If we want, this condition can also be formulated in terms of $\theta(t)$ and $\phi(t)$, since a circle on a sphere with radial diameter $D$ can be defined by an intersection with a cone centered at the origin. Namely, if there exists a unit vector $\overrightarrow v$ such that the dot product between $\overrightarrow v$ and any vector $(x(\phi,\theta), y(\phi,\theta), z(\phi,\theta))$ is larger than $\cos(D/2)$, then the curve is within the circle (see 2d illustration figure below). 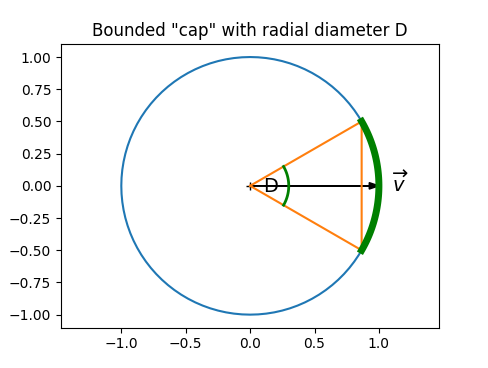 To see this we pack the circles with their centers on the equator (a great circle) $2\pi/n$ apart, which gives us $n$ copies. We then place the other circles in a similar manner on a great circle that is perpendicular to the equator. For even $n$ it is easy to see that $n-2$ circles can still be placed along the perpendicular great circle, since on both sides of the strip of (radial) width $2\pi/n$ there remains two arcs spanning $\pi - 2\pi/n$ each, which can thus hold $2(n/2-1) = 2n-2$ copies of the circle.

For an odd $n$ the configuration is a bit more complicated but with a similar argument we can see that there remains room for $2n-3$ copies (of the odd $n$ circles that can be placed on a great circle in general, one is blocked from one side and two are blocked from the other, see illustration below).

The following figure gives a 2d illustration of these configurations for $n=6$ and $n=7$ (the two green lines bound the strip that is blocked by the circles packed along the equator). 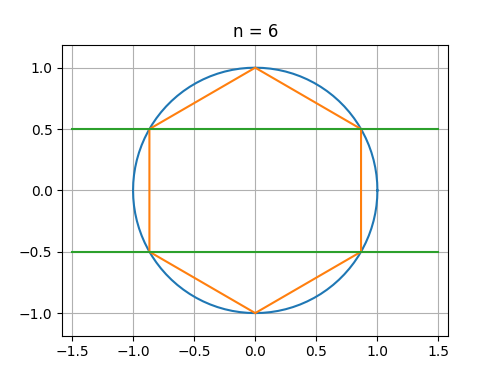 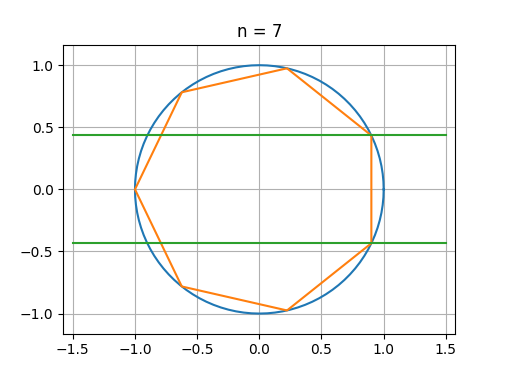 While there are optimal solution to Tamme's problem for $N \leq 12, N=24$, there is no known optimal solution for general $N$ (see this paper and its references for example). Still, there are solutions for $N$ values up to 150, which are conjectured to be optimal.

So to conclude, your theorem can be generalized to any circle bounding the curve, and the problem can then be mapped to the inverse of Tamme's problem. The number of copies $N$ depends on the solutions to Tamme's problem (and is at least $2n-3$ for $D \leq 2\pi/n$). Given a circle of diameter $D$ that bounds the curve, one can look up in a table of Tamme's solutions (such as Table 1 from here) for the maximal $N$ for which the known solution to Tamme's problem is still smaller than $D$.

Not the answer you're looking for? Browse other questions tagged dg.differential-geometry or ask your own question.

4
Are these operators defined on 2D surfaces self-adjoint?
1
Finding an explicit curve when torsion and curvature are equivalent
4
Conditions for a curve to belong to a hyper-surface in $\mathbb{R}^n$
Question feed