Is the endomorphism algebra of a dualizable bimodule necessarily finite dimensional?

Special case for which I know the answer to be positive:
If $k=\mathbb C$ or $\mathbb R$, and if we're in a C*-algebra context, then I know how to prove that $End({}_AM_B)$ is finite dimensional. But my proof relies on certain inequalities, and it does not generalize.

In my question above, I've just used the term "dualizable", which you should interpret as "both left and right dualizable".

There's also the notion of fully dualizable, which means that the left dual has its own left dual, which should in turn have its own left dual etc., and similarly for right duals. Once again, I'm a bit vague as to whether all these infinitely many conditions are really needed, or whether they are implied by finitely many of them.

PS: I hope that I didn't mix my left and my right.

This doesn't directly answer your question, but I think that it is relevant. Also, it's ridiculously long, but hopefully that will make for easier reading than a shorter, vaguer version.

Let's think of the center of an algebra $A$ and the space of bimodule maps from $_AA_A$ to itself. Pictorially, we think of this vector space as associated to a circle subdivided into an incoming and outgoing interval and labeled entirely by $A$. (Later we will consider circles labeled by various combinations of $A$, $B$, $M$, and $N$.)

We should (in TQFTish contexts) think of the finite dimensionality of a vector space $V$ as meaning there is another vector space $W$, together with maps $r:k\to V\otimes W$ and $s: V\otimes W \to k$, which satisfy the zig-zag identity. (See the definition of dualizable in André's original question.)

But now we should smell a rat. If the center of $A$ is associated to an (appropriately decorated) circle, then the maps $r$ and $s$ should be associated to annuli (a circle cross a 1-dimensional cup or cap, like the plumbing under a kitchen sink). 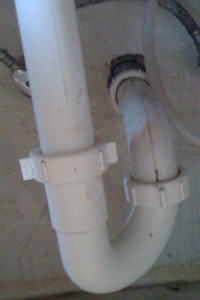 (source) The "rat" is nonlocality; we are in danger of violating the dogma that everything should be local. Circles and annuli might seem simple, but intervals and disks are simpler still. We should try to replace the condition that $A$ has finite dimensional center with a local criterion.

This can done as follows. Roughly speaking, we want to construct a fully extended 1+1-dimensional TQFT-like structure. The 0- and 1-dimensional parts can built for any algebra (or linear 1-cateogy) $A$. The existence of the 2-dimensional part, generated by (2-dimensional) cups, caps and saddles which satisfy relations corresponding to Morse cancellations, will imply that $A$ has finite dimensional center.

Now for the details. To a point we associate $A$ (or the category of representations of $A$, if we prefer).

Our 1-manfolds will be split into "incoming" and "outgoing" parts. The boundary points of the 1-manifolds will be either left-facing or right-facing, and these will correspond to left and right actions of $A$.

We will only need to consider the first sort of circle above (the bigon).

Now for the 2-dimensional part. Rather than describe the full structure one might want, I'll concentrate on the parts of the 2d structure which are relevant to the question about centers. The generators for the 2d part correspond to Morse critical points (index 0 (cup), index 1 (saddle), index 2 (cap)). These come in various flavors, depending on how the top and bottom 1-manfolds are divided into incoming and outgoing. Since we are only interested in bigon-type circles, we will only consider one flavor of cup and cap. But we will need two flavors of saddle.

The above identities should be thought of as 2d versions of the zig-zag identity.

Definition. An algebra $A$ has Property X is there exists a cap and hard saddle satisfying the above identities. (Recall that the cup and easy saddle come for free.)

In summary, Property X is our local replacement for "finite dimensional center".

Remark. I (weakly) suspect that algbras with finite dimensional centers which do not satisfy Property X are relatively rare. If it turns out that Property X is very strong (e.g. if it implies that $A$ is finite dimensional semisimple), then I'll be a little bit embarrassed (but only weakly surprised).

Now, finally, we get to the punch line.

Proof. The idea is to construct a 2d TQFT, similar to the one above, in which manifolds are divided into $A$-colored parts and $B$-colored parts, with the interfaces between $A$ and $B$ labeled by $M$ or $N$ as appropriate. (Recall that $N$ is the dual of $M$.) So 1-manifolds in this TQFT can be independently either incoming or outgoing, either $A$-colored or $B$-colored, and (if they are part of the boundary of a 2d bordism) either top or bottom. We will construct maps $$ u: k\to End(M) \otimes End(N) $$ and $$n: End(N) \otimes End(M) \to k $$ which satisfy the zig-zag identity. It will follow that $End(M)$ is finite dimensional.

Remark. Unless I've made a mistake, we only need one of $A$ or $B$ to have Property X.

(This would be all be much easier with pictures. I apologize for the lack of them.)

If we assume that

That $\epsilon$ and $\eta$ give a duality pairing follows from condition 2. (The nontrivial morphism in one of the triangle diagrams sends a map $f: {_A}M_B \to {_A}M_B$ to the identity on ${_A}M_B$ tensored with the "trace" of $f$ via the duality pairings. Condition 2 tells us that the identity string can absorb the trace bubble, and similarly for the other triangle diagram.)

Unfortunately, condition 2 (or its "mirror," which would show dualizability as a $Z(B)$-module) seems very strong, but it is crucial for the above proof.

Not the answer you're looking for? Browse other questions tagged ct.category-theory bimodules ra.rings-and-algebras or ask your own question.

11
Morita equivalence for *-algebras
12
Is a “smooth” finite-dimensional algebra separable modulo its radical?
6
What are the dualizable objects with respect to pushout-product?
Question feed