How far can a particle travel from its origin if it exhibits self-avoiding Brownian motion in two-dimensions?

Let's say I have a point-like Brownian particle undergoing two-dimensional diffusion on an infinite plane with the caveat is that the particle can never return to a coordinate that it previously visited (these coordinates become fully reflecting to the particle). As such, the particle may 'trap' itself if its trajectory generates a closed loop.

Assuming the Brownian particle has some diffusion coefficient, $D$, is there a known mean and variance for the maximum distance the particle will travel from its origin before trapping itself?

For the discretized / random-walk version of this question - Is there a known result for the mean maximum distance from origin (and associated variance) for a random walker on an infinite two-dimensional lattice of some degree $m$?

Edit - To try to better clarify what I mean by the particle being 'trapped', I would define this as the state where the furthest point from the origin in the particle's trajectory is fixed due to the particle being unable to escape from a closed curve. I don't mean to imply that the point-like Brownian circle is "frozen in place", akin to a random walker where all edges from its position connect to previously occupied vertices. I fail to see how this situation is possible without some sort of discretization.

In response to Nate Eldredge's comment, there are certainly some serious issues with defining how the Brownian particle acts at the reflecting boundary its trajectory generates. Loosely I would like to say that the particle reflects at a random angle, and I would appreciate any help with making this better defined. Regarding the second point, that "scaling and the Blumenthal 0-1 law would suggest that the trapping happens immediately", does this also hold true if we assign the Brownian particle some drift parameter $\beta$?

In any case, the discrete or lattice version of this question (mentioned above) is very interesting to me.

As per Ron Maimon's suggestion, I did a little simulation for the lattice version, counting the number of paths that get trapped at or before $n$ steps. For example, here is a trapped path of 45 steps: 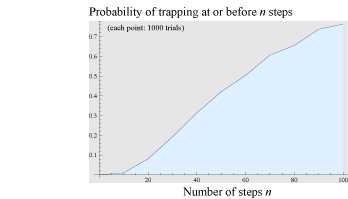 Addendum. Incidentally, I have some evidence—not definitive—that the mean path length before reaching a cul-de-sac is about 71.6 steps.

Not the answer you're looking for? Browse other questions tagged stochastic-processes pr.probability random-walks or ask your own question.

2
Inferring the location of a reflecting boundary in a toroidal cage with a Brownian particle
8
A discrete random walk that avoids previously visited vertices for an exponentially distributed time interval
2
Manhattan distance vs. absorption time on an unbounded integer lattice
2
Probability a Brownian particle with an exponentially distributed lifetime hits a sphere before vanishing
8
Area covered by Brownian motion of 2D disc
1
diffusion coefficient derived from simple random walk in a 1D semi-infinite domain
0
Coalescence of random walks in 3D
Question feed